<3sRichardSimmons said:
the whole "force a player to go through the game on easy mode before letting them play through on the real difficulty" was shit design
Click to expand...


This is a matter preference, as there's nothing wrong with this design principle
The japanese like this because for them the 1st playtrough is meant to be enjoyable and "relaxing" but also a sort of training mode for whatever rewards they might get in the locked extra modes

<3sRichardSimmons said:
I would say that, when viewed as a complete package, "what it is" is a mediocre game.
Click to expand...


What RE4 is, is a tightly designed, well paced and entertaining 3rd person shooter

<3sRichardSimmons said:
A creative work, which I think games are, should strive to be perfect
Click to expand...


Depends on the intention of the creator(s)
RE4 doesn't care about story, the story is only there to give context and provide some cool/funny cutscene

<3sRichardSimmons said:
otherwise why the fuck are you trying to make art ?!
Click to expand...

Ash said:
It's cool because level design is constantly throwing new challenges of a wide variety at you
Click to expand...

I honestly don't get what you're talking about here.
Click to expand...

Every new level has it's thematic level design hook
With some times even the different areas inside the same level trying to shake things up - just looking at the first level, you have timed survival in a sandbox, then slow-paced room clearing and finally ending with ambushes + booby-traps in a dense patch of woods with houses
Then over the next levels you're taking on enemies through multiple narrow paths over the mountais, then long distance sniping, then managing mobs across different elevations, riding cable carts, surving a wave assaults on small house...
And before you know it you're battling giant fish, ogre men and a John Carpenter body horror village leader before being driven by the mob into a castle like you're in some kind of old Universal monster flick

And it's all, such good pacing
It's a really versatile set of levels, and it just keeps getting better and more intense
In those first 2 acts you get something new every level, you never know what to expect
And even though the 3rd act is the most linear, the intensity has been built so well naturally that the player barely notices that the 3rd act is just complete action bonanza

Ash said:
and enemy diversity placement and scripting is pretty good regardless of what you claim...
Click to expand...


There's nothing to disagree here, and you can't prove otherwise
This is yet again your preferences taking over and not the objective quality of the design, which is solid

<3sRichardSimmons said:
I will say that I certainly wasn't taking the game seriously by its end, but it seemed to me that the game generally was
Click to expand...


I would say age is robbing you of your sense of humor
While the game starts very low-key, it gradually becomes more and more ridiculous with each chapter, and that is very much intentional

DJOGamer PT said:
Also are you saying that you would headshot enemies, then wait for them to recover?
Click to expand...

Yes, that is largely how I was playing in the village ... at the same time it was what I felt I felt the game was incentivizing me to do
Click to expand...

Well, as you are all no doubt ecstatic to hear, I have now played Resident Evil 5 (in SP).

And what, you might ask, are my thoughts on Resident Evil 5?

Well, the first one I had upon completion was: "What the fuck did I just play?"

The second was: "Wow what a pile of steaming hot trash".

To get the co-op argument out of the way: Yes, I can totally see that the game would be better with a good friend by your side, but you know what else is? Terminal cancer.

The nicest thing I can see about my experience with RE5 is that it made me look back on RE4 with strong affection.

I'm not going to do much of a deep-dive on this because I hated this game so fucking much, but here are some quick bullet points.

-Wesker has always been a shitty character and a shittier villain, but ohmygawd is he taken to the Nth degree of garbage here. Fucking shitty Japanese pornographic cartoons super-powered trash.

-Worst depiction of Africa I've ever seen in a game. I lived for several years in West Africa, for a couple in Nairobi, and have visited both SA and Egypt, and man this game just looks fuckall like it takes place on that continent. Somewhere early on in development there was a meeting of the art leads and they decided that the best way to evoke Africa was to just make everything gray. Really fucking gray. Not only that, but I'm pretty sure that when you look closely most of the zombies are very clearly of East Asian or Indian ancestry.

-The inventory. Some genius decided that the one thing that should be retained from the franchise's roots is shitty nonsensical inventory management. It's fine at the beginning, but once you're working with a mostly full inventory it becomes a Goddammned nightmare. Without exaggeration the most difficulty I encountered in this game was trying to figure out how to get Sheva to stop unnecessarily splitting her ammo stacks so that she would have a free slot to just pick up another type of ammo and load it into an empty weapon in her inventory. What sort of stupid motherfucker thinks this is good design?

-Encountered a game-breaking bug in Chapter 6-1 that has apparently existed since launch 13 years ago, but I had to slum around Steam forums to find a fanpatch for it anyways. Thanks Crapcom!


This is all to say: Resident Evil 5 is irredeemable garbage. I was planning on playing RE0 next, but after this shitfest I need a palate-cleanser from the franchise, even though RE0 is supposedly an actual proper RE game. I hope you all check back in a year from now when I inevitably decide to play the copy of RE6 that's sitting in my Steam inventory. Surely it can't be that bad, right?

Perhaps you should play some good RE games instead of crappy ones? Like the remake of the first game and the original version of 2 and 3. I also think Revelations 2 is decent.
"Fallout 3 is just like the holocaust. We must remind ourselves daily so we don't forget." - Andyman Messiah

"With the difference that Fallout 3 actually happened." - JarlFrank

Zlaja said:
Perhaps you should play some good RE games instead of crappy ones? Like the remake of the first game
Click to expand...

I did; it’s reviewed earlier in this thread (I liked it a lot).

OG 2&3 are on my list, but my understanding is it’s a bit of a hassle to emulate them properly on modern rigs and I am lazy.

<3sRichardSimmons said:
OG 2&3 are on my list, but my understanding is it’s a bit of a hassle to emulate them properly on modern rigs and I am lazy.
Click to expand...


They are pretty easy to run.

There is even a prepackaged emulator for RE2 and 3 with higher res upscaled and hand fixed backgrounds for Dolphin the GC emulator. You just need the NTSC isos.

If you want something more vanilla just grab the PSX versions and run them with your PSX emulator of choice.

There is also the rebirth pack for RE1/RE2/RE3 PC versions which allows them to run on modern PCs without too many issues.
https://appleofeden.de-doc.com/index.php/download/resident-evil-2-classic-rebirth/

Yeah PS1 games and most PS2 games are really easy to run with emulator, rarely would I have any problems with those that I've tried.

Disciple said:
RE4 was the point where the franchise shamelessly sold out for mass appeal and turned into a shooter. Play the first two entries (the originals, not the remakes) if you want a proper taste of what is Resident Evil.
Click to expand...

REmake is the best one you fucking idiot.
"Men will pay for tits until they're broke or dead."

Resident evil is one of the most overrated games of all time with its b-horror and jump scare shit. Silent hill 2 is better than any resident evil game ever created.

Multidirectional said:
Yeah PS1 games and most PS2 games are really easy to run with emulator, rarely would I have any problems with those that I've tried.
Click to expand...


Yeah very easy to run and acquire, though I tend to prefer using the reshdp project for the GC version of RE2/3 now as it goes far beyond a standard AI upscale.

They got higher res sources where possible (RE3 famously has a ton of higher res backgrounds available for certain scenes that weren't used ingame), did an AI upscale on everything and then went through by hand to fix up any glitches and make any environmental text more legible.

Probably the gold standard for what these upscale projects should do, rather than just lazily running everything through an upscale and not bothering to check the results.

Telll me something <3sRichardSimmons?
Are you still shooting enemies and waiting for them to recover?

Disciple said:
RE4 was the point where the franchise shamelessly sold out for mass appeal and turned into a shooter. Play the first two entries (the originals, not the remakes) if you want a proper taste of what is Resident Evil.
Click to expand...


RE4 is the only reason the franchise exists anymore, faggot. No cunt was buying the games prior to it. 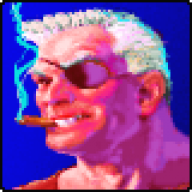 DJOGamer PT said:
Telll me something <3sRichardSimmons?
Are you still shooting enemies and waiting for them to recover?
Click to expand...

Sometimes, but not as much!

I know you're trying to be pithy, but in general one of the only things that RE5 does better than RE4 is force the player into a much more mobile playstyle. Unfortunately this also has some drawbacks like when you realize that by far the easiest way to deal with the crocs is to just run past them.
You must log in or register to reply here.