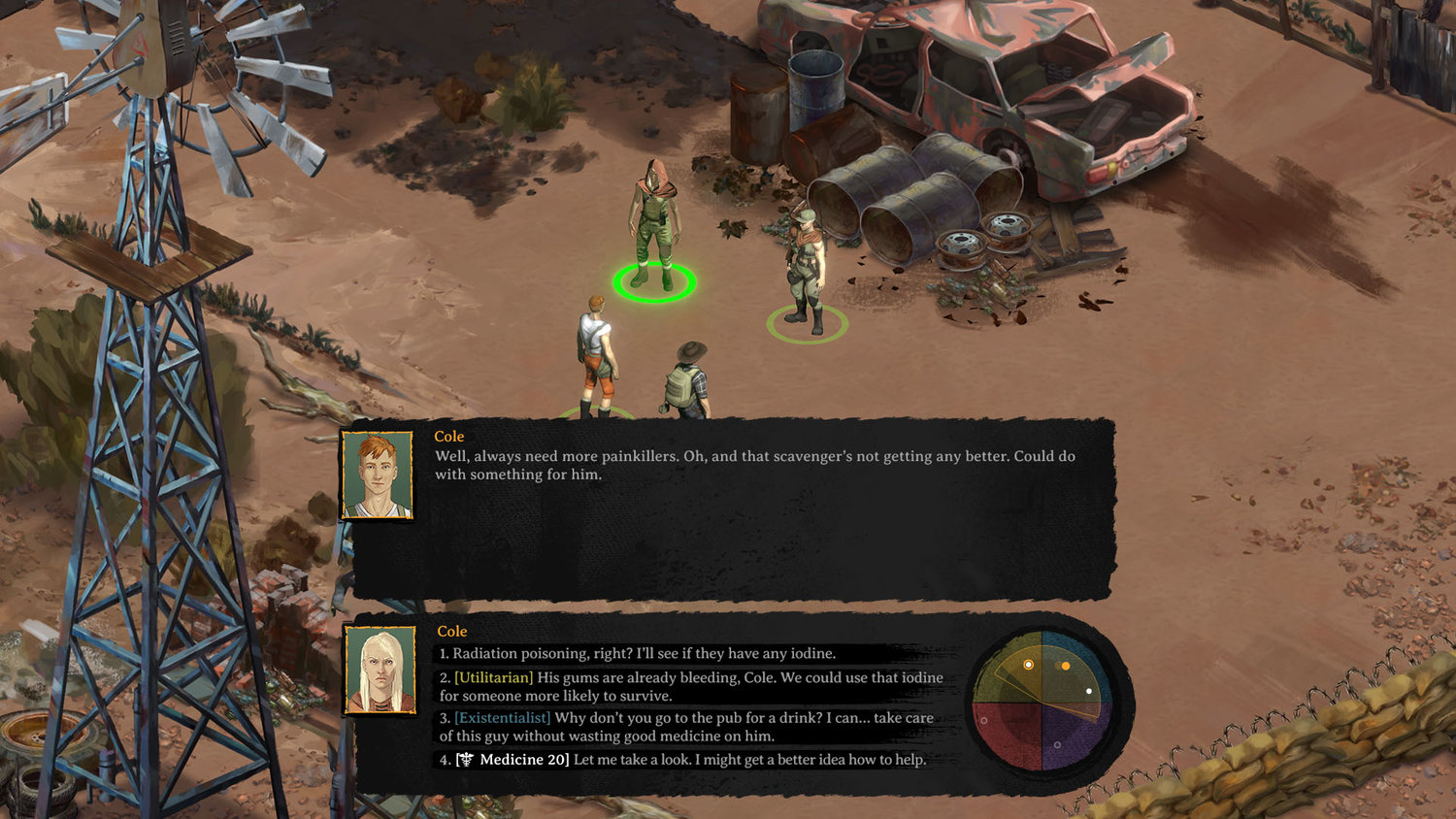 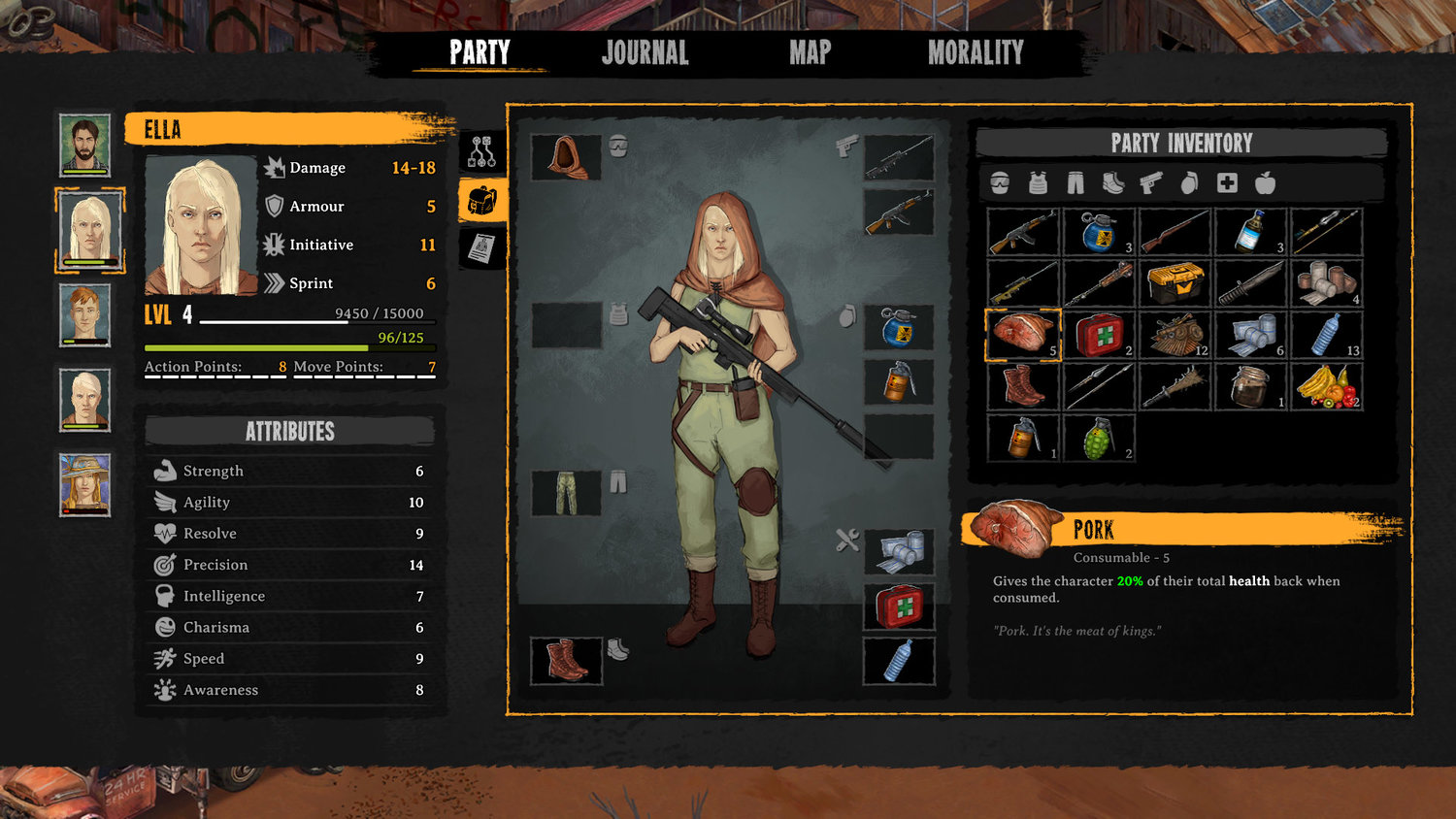 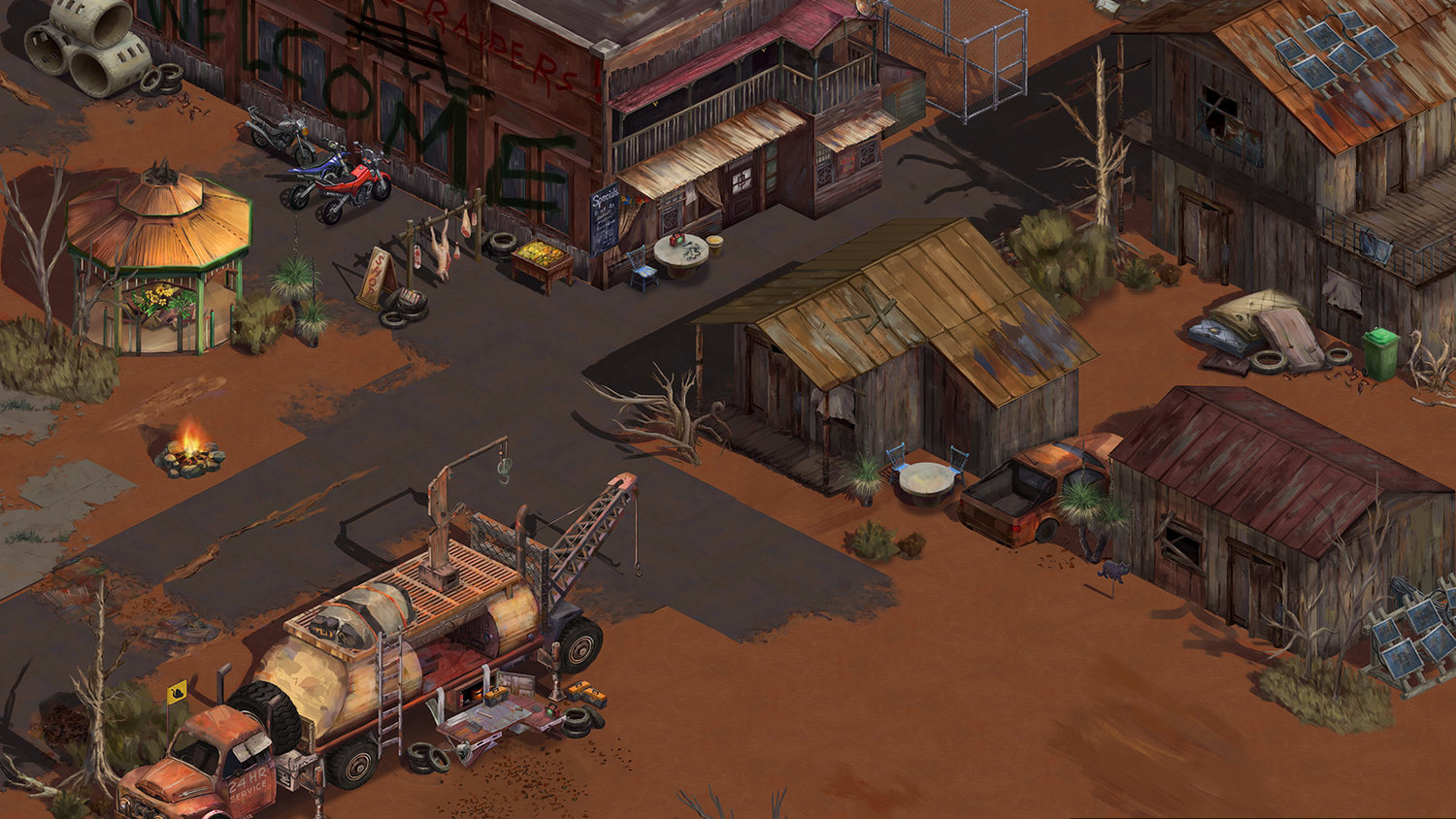 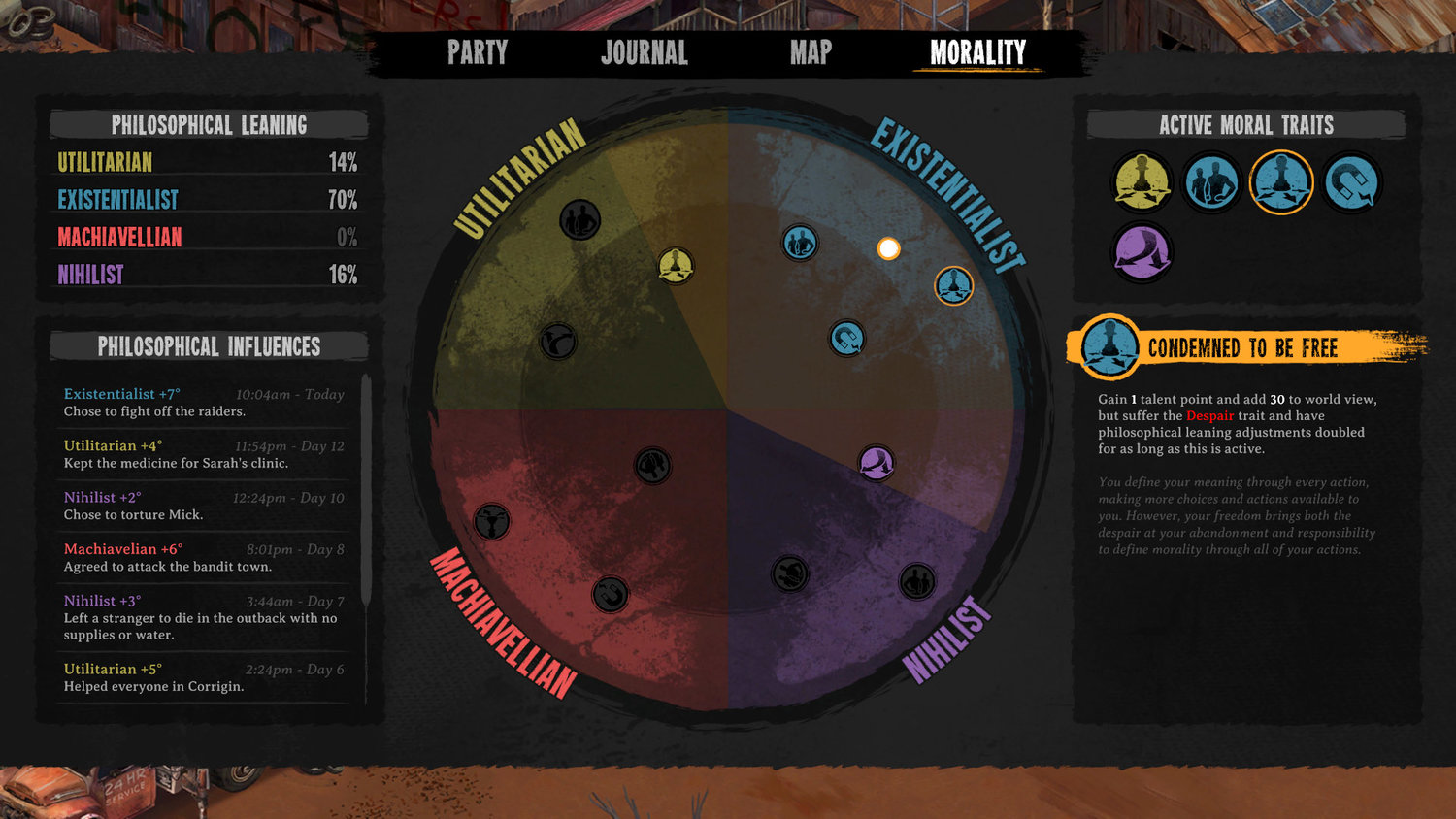 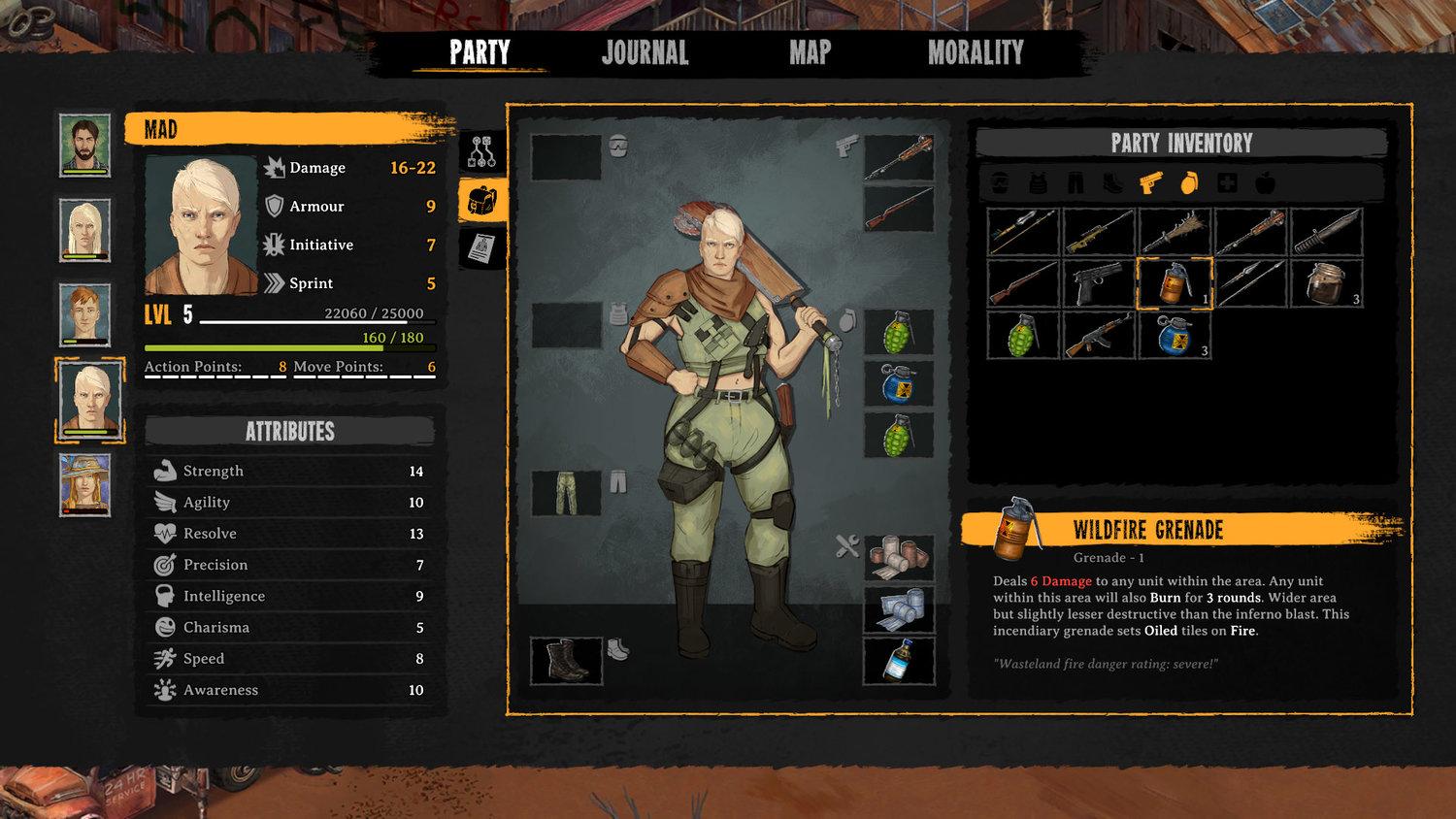 Broken Roads’ pre-alpha reveal trailer can be found at https://youtu.be/1szow-dCPzc

The game tells the story of a group of companions as they make their way across Western Australia, encountering new friends, overcoming terrible enemies, and uncovering a mystery behind ever-stranger happenings in the Never Never.

Broken Roads’ real-time exploration and turn-based combat is beautifully illustrated with hand-drawn artwork throughout, with the goal of offering an experience of playing in concept art – 3D characters, VFX, 2D environments and props all follow this painterly style.

“As a fan of computer RPGs since the 80s, it’s been amazing getting Broken Roads to this point,” said Craig Ritchie, Founder & Game Director at Drop Bear Bytes. “Being able to put our own spin on the post-apoc genre and get experimental with philosophy and morality has been a lot of fun. It’s been a busy year getting us to this point and I’m incredibly proud of what the team have done.”

The game also presents players with an original morality system: the Moral Compass. This novel design sees dialogue options and questing decisions influence, and be influenced by, a character's philosophical leaning. Player decisions will shift a character’s philosophical leaning and alter their future choices, as well as open up Moral Traits which can help or hinder.

Broken Roads will be shown off for the first time at PAX Australia between October 11-13, and is scheduled for release in 2021. Drop Bear Bytes is comprised of industry veterans and talented newcomers, with alums from the likes of CCP Games, Riot, Ubisoft, Electronic Arts and Torus Games. The environments and props are being produced by Mighty Vertex, the art studio behind the isometric graphics in Harebrained Schemes' Shadowrun series of RPGs.

Born of a love for traditional computer role-playing, Broken Roads is an upcoming isometric post-apocalyptic RPG providing a rich, engaging narrative and an all-new morality system. Using fixed-camera, hand-drawn isometric props and environments, the game will allow players to experience a ravaged future in a story of survival, introspection and community as they make their way across a desolated Australia.

Headquartered in Torquay, Australia, Drop Bear Bytes was established in early 2019 and has a team comprised of developers, artists and writers from Australia, South Africa, Canada, UK, USA and China. The studio was founded by Craig Ritchie, a former games journalist turned marketing and brand manager who has worked on titles such as EVE Online, the Vampires: The Masquerade MMO, DUST 514, EVE: Valkyrie and Freya and the False Prophecy.
Click to expand...

Broken Roads’ unique morality system is based on four areas of moral philosophy: Utilitarianism, Nihilism, Machiavellianism and Existentialism. In a 360-degree chart of possible options, players are able to choose from those within a certain range of their character’s core alignment.

Your decisions and dialogue options will shift your leaning and thus alter your possible range of future choices. 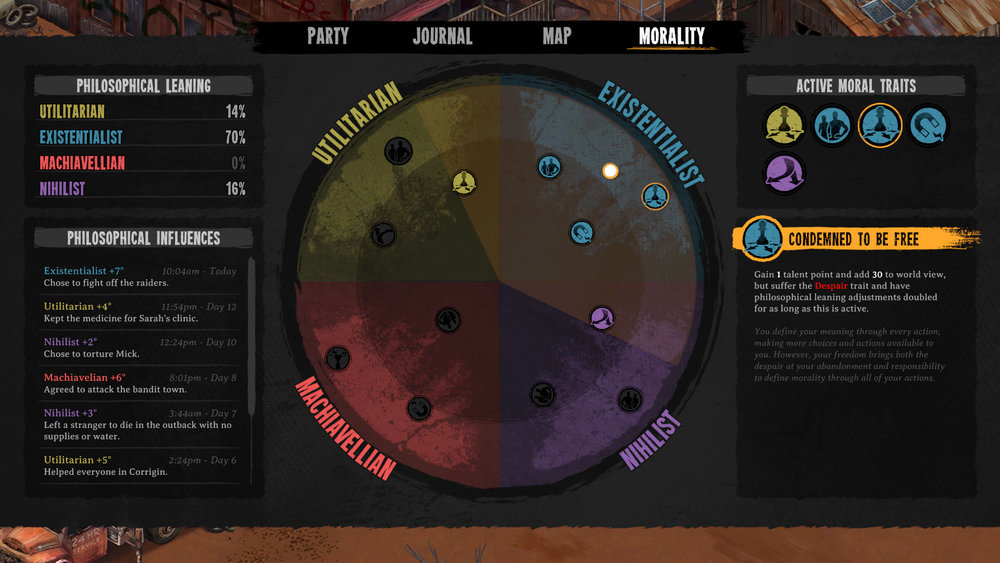 We believe this will enhance the game’s roleplaying realism - you can not take an evil option and then immediately follow up with the most noble option. Decisions will not be clear cut good and bad – we want to present real moral dilemmas that players will have to carefully consider.
Click to expand...

Turn-based PC games coming out non-stop!
Rolleyes are mine

It's a bit weird, turn-based post-apocalyptic with PoE-looking interface.

Location
An oasis of love and friendship.

Australia? It comes back full circle.

They are an awesome group of devs. I really wish them the best!
Beautiful Desolation RPG Codex Thread.

Crikey-based games. On the barbie.

Looks decent.
Take your gold, you greedy old son-of-a-bitch. Take all of it, no need to say thank you. Because this is for every developer's decision based on market research. This is for every unasked-for innovation. This is for every piece of marketing bullshit that claims human beings are all too stupid to understand basic maths and that removing core elements isn't dumbing down. This is for every excuse, every lie, every justification for making bad games, bad RPGs, and getting rich off the profits from them. - grotsnik

Is the morality system based on the dichotomy of "cunt" and "mate"?

Lambchop19 said:
Codex Top 70 is an irrelevant popularity contest. The Codex isn't a democracy. It's a constitutionally representative hive mind.

"What can change the nature of a man?"
[Lie: A surgery and medication.]

The morality system is kind of simplistic but a welcome addition nevertheless, since it's an important aspect of roleplaying that's neglected by most RPG games.

What's the difference between this and living in current Australia?
Gratia non tollat naturam, sed perficiat.

Burning Bridges said:
My Vitamin B6 store had been completely depleted by my sudor glandae and mercury poisoning through cellphones. It was so bad I had been in a wheelchair for 5 years. But since I started chewing on Carpathian Elderberry roots and cat semen plus Clit C 0.5-1.0mg lately and now I have more energy than a 16 year old Adidas sports shoe. I run the Berlin Marathon and have three different girflriends because one cannot satisfy me sexually. Just let me know if you need more info, I know a link where you can get the treatment for under 300$ a month.
Click to expand...

Darth Roxor said:
But what if he actually thinks today's Saudi Arabia is light islam and he wants to upgrade to moderate?
Click to expand...

janjetina said:
What's the difference between this and living in current Australia?
Click to expand...

janjetina said:
What's the difference between this and living in current Australia?
Click to expand...

There are probably less things trying to kill you in the post apocalypse future.

Finally my years of fighting the native wildlife and bogans alike will pay off. I'm starting to get a bit overwhelmed by everything being post-apocalyptic but there's always a chance that the game will stand out as something great.

Definitely worth keeping an eye on. Hopefully the Dev starts posting here so the Codex can make sure that Nazis aren’t judged too harshly by the morality mechanics.

The studio was founded by Craig Ritchie, a former games journalist turned marketing and brand manager who has worked on titles such as EVE Online, the Vampires: The Masquerade MMO, DUST 514, EVE: Valkyrie and Freya and the False Prophecy
Click to expand...

normie said:
tbh I'm not sure who are the bigger faggots
Click to expand...

I know you're an easily confused individual, but whenever you ask yourself that question, remember that the answer is always you. You are the biggest faggot.
Click to expand...

Looks interesting, but will there be a cameo by Cleve? Certainly he would survive the apocalypse in his bunker.

We'll see how it pans out, but I'll take a gander at any game that lets you munchkin Existentialism points

lukaszek said:
i like how they bothered to get in positions, get shot at only to have 1 dude kill everything with 1 grenade

Also wonder what is a party size limit, it appears you can get quite a few bodies
Click to expand...

The party size, the user interface, the dialogue menus. It's a turn-based, post-apocalyptic Infinity Engine game.

Will we get a petrol sniffing abbo companion?

Brainlet2 said:
Will we get a petrol sniffing abbo companion?
Click to expand...

No videogame has been able to capture the shitposting prowess of abbos either.

Lambchop19 said:
Codex Top 70 is an irrelevant popularity contest. The Codex isn't a democracy. It's a constitutionally representative hive mind.

"What can change the nature of a man?"
[Lie: A surgery and medication.]
You must log in or register to reply here.
Top Bottom