The next location to be added to the Colony Ship Early Access build is the ECLSS, home to the ship's critical life support systems and the faction of cybernetically augmented monks who maintain them. The monks of House Ecclesiastes were described in a development update published back in 2018 which the update announcement largely rehashes, but it does include a few new screenshots as well. 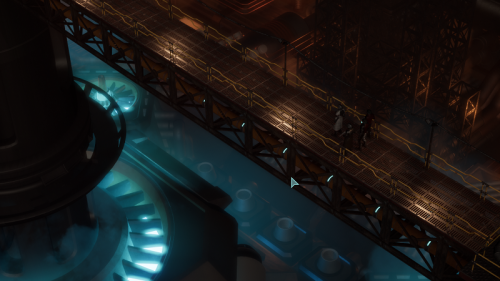 The ECLSS (Environmental Control and Life Support System) is now available, bringing the number of locations to 8 out of 12.

When the Mutiny broke out, the Chief Technical Officer promptly sealed the ECLSS, declaring that neither side will use it in their war. Those who wished to leave were allowed to do so; the rest remained with CTO Miller, committed to supporting life on the Ship.

Miller knew that the warring factions would be coming for the ECLSS. They would want control, power over life and death on the Ship, something their enemies could never permit. The fight for ECLSS would make the fight for Mission Control look like a border skirmish, and Miller knew how it would end: with destruction of the Ship’s essential systems, the failure of the mission, the death of every man, woman, and child aboard the Ship. That, he could not permit.

The answer lay buried in the Ship's databanks: augmentations meant only for the most extreme circumstances, for small or even individual deep-space maintenance missions, augmentations that would make a man more than a man, and less – able to survive alone, smart enough and strong enough to deal with any challenges that might arise on years-long expeditions.

These augmentations went beyond the artificial eyes and reinforced bones common to the Ship, and amounted to a fundamental reworking of the human body. Functions inessential for long space missions would be removed altogether, freeing the body’s resources for more practical needs.

With this transformation, the ECLSS crew would become what they needed to be: just as the God of Ecclesiastes was above human struggles for power, for fame, for wealth, so too would the superhumans of the ECLSS be above the Ship’s passing struggles, devoted solely to its survival. Outsiders would be able to see them as something other than a foe or friend; and they would have the strength to carry out the heavy task before them.​
The next update for Colony Ship will consist of new content for the Pit and is scheduled for late October, although I imagine that like this update it might be a bit late.

Slowly, but surely, it's getting there!
"Once again, allow me to welcome you to Ravenloft! The time has come. Oh, but please, don't be afraid to smile. Stand not so grimly before me."
- Count Strahd von Zarovich, Supreme Master and Lord of Barovia

Nice I will finish to play when its ready from my Chapter one before the fight for Pit save but its good to see that game progress even despite all what happens around.
Слава матушкѣ-Россіи, Слава русскому царю, Слава вѣрѣ православной, И солдату-молодцу! За Царя и Советы!

teal and orange yay
draqness
probably can write me as some schizo who begins to believe that AoD was a more pleasing game to look at than this one.

but maybe c&c gonna be gut. an shooting ppl in the face with muh big pistol.
The creation of a single world comes from a huge number of fragments and chaos.

This game still isn't finished yet? What the fuck?
Combat is an antiquated petty-bourgeois concept promoting colonialism and racial subjugation.
My Classic video game music channel | Exult Setup Guide | Deus Ex in Win 7 | FRUA Setup Guide | My Music
Use the report function for retardo-alerts.
You must log in or register to reply here.