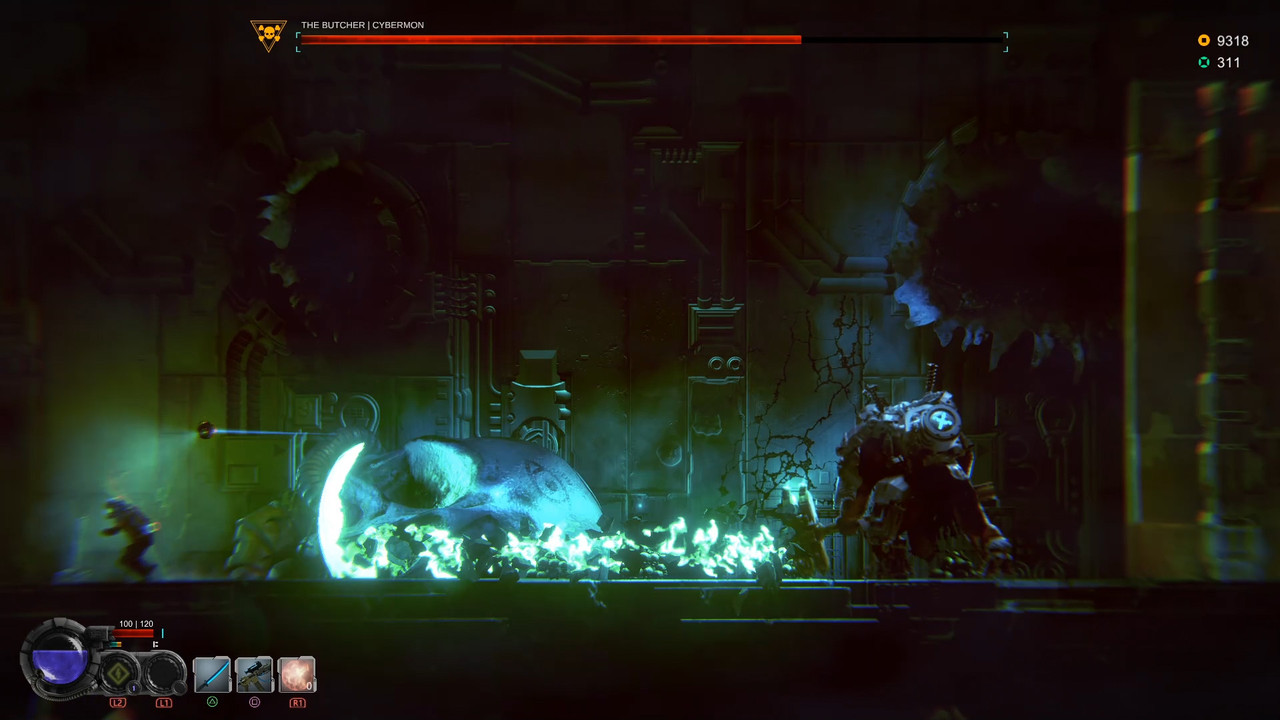 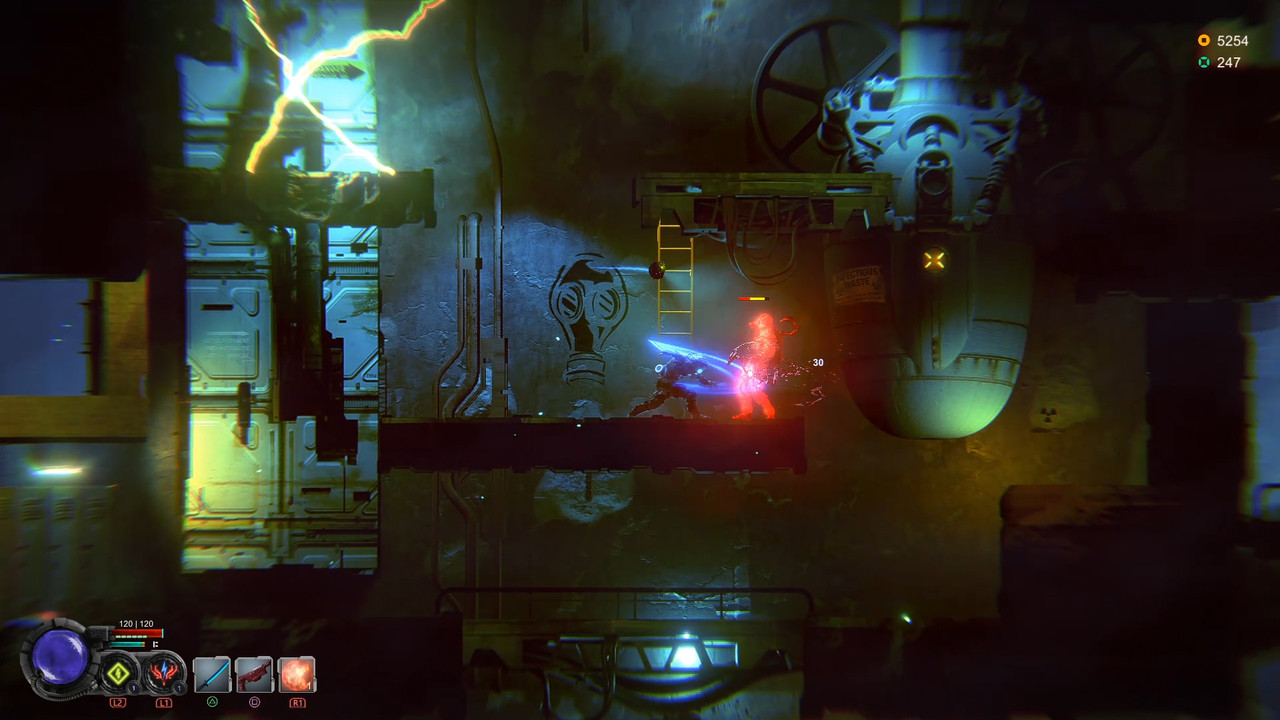 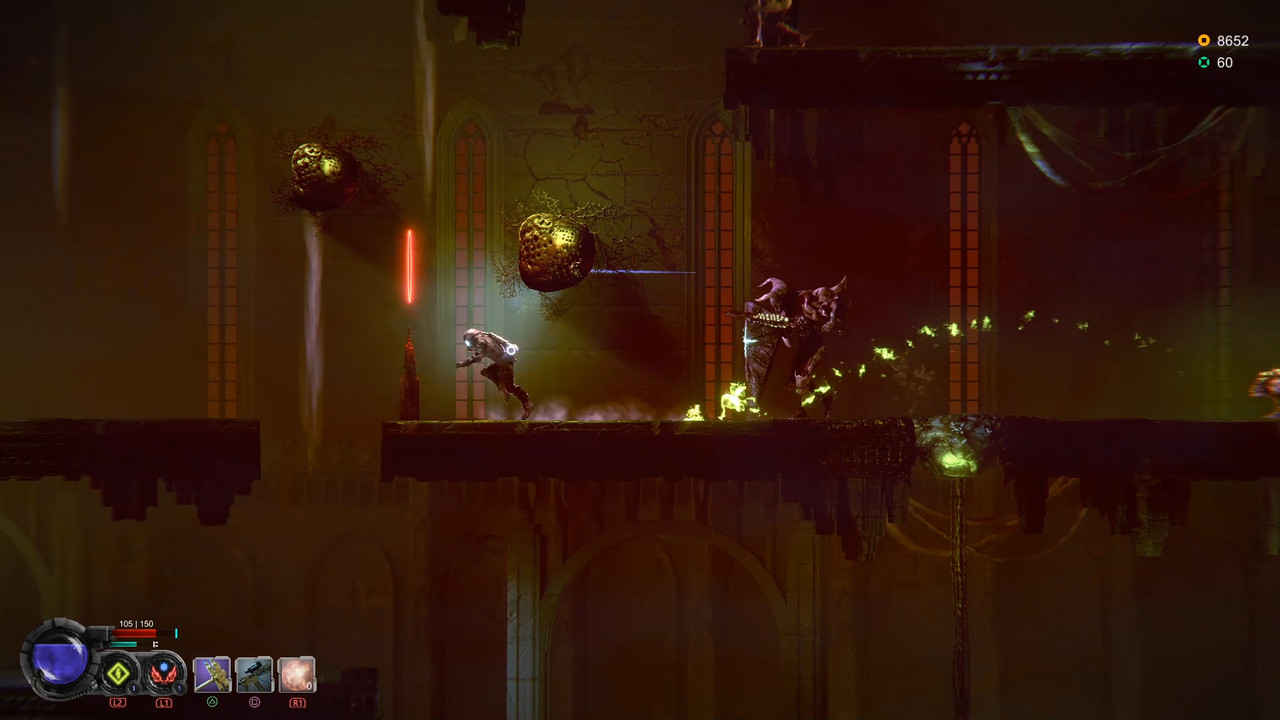 Dark light is a Sci-fi survival action-platformer set in a post-apocalyptic world overrun by the Dark Creatures from unknown dimensions.
You were dropped into the wrecked world as a Dark-Hunter, the last remains of elite human soldiers. To survive, you need to equip yourself, fight through your way, collecting ‘shards’ from killing super nature creatures to reinforce your energy. Through surviving, you will explore the mysterious dark zones, kill, gain, get stronger and find the way to seal the Dark Void and save the world from doom.

Dark light is a Sci-fi survival action-platformer set in a post-apocalyptic world overrun by the Dark Creatures from unknown dimensions.
You were dropped into the wrecked world as a Dark-Hunter, the last remains of elite human soldiers. To survive, you need to equip yourself, fight through your way, collecting ‘shards’ from killing super nature creatures to reinforce your energy. Through surviving, you will explore the mysterious dark zones, kill, gain, get stronger and find the way to seal the Dark Void and save the world from doom.
Click to expand...

That certainly is a lot of dark. Did some survey or something say that using the word 'dark' more times in your game makes it sell more? Dark hunters, dark void, dark light, dark creatures, dark zones. I mean it might be a good game but ffs, it reads like a teenagers first attempt at writing.

Metroidvania games generally suck now. If you're gonna make games like these use Contra 3 as your template and scrap all the fake "RPG" bullshit.
Forged when the world was young, and bird and beast and flower were one with man, and death was but a dream.......

I feel like I've seen this game a thousand times.

Released May 2020? What was the point of posting this?

Anyways, they lost me at "soulslike".

Anyways, they lost me at "soulslike".
Click to expand...

It’s been a while since our previous major update, really sorry for keeping you all waiting for so long. After being quiet for half a year and not resting for one day, we can finally present you with our last major update before the final release. As mentioned in previous notes, this update is about factions, skills, and much more content! You are empowered to choose factions and build your skill the way your like. In different areas, your action will trigger different events and outcomes.

Here are what we have included:


We have created two opposed Factions: Knight of Diamond Order and House of Blood Wolves

Each faction has its own base town. Following the storyline, you can decide which faction you prefer to join. Once you joined the faction, you can start to develop your skills by completing quests from that faction. The opposed faction leader will become a powerful boss for you to defeat.

Cargo-bay has been updated into a neutral faction, in which you can acquire quests and gain rewards. The cargo-bay NPC will also give players a clearer direction in terms of what players can do and basic information about other factions. 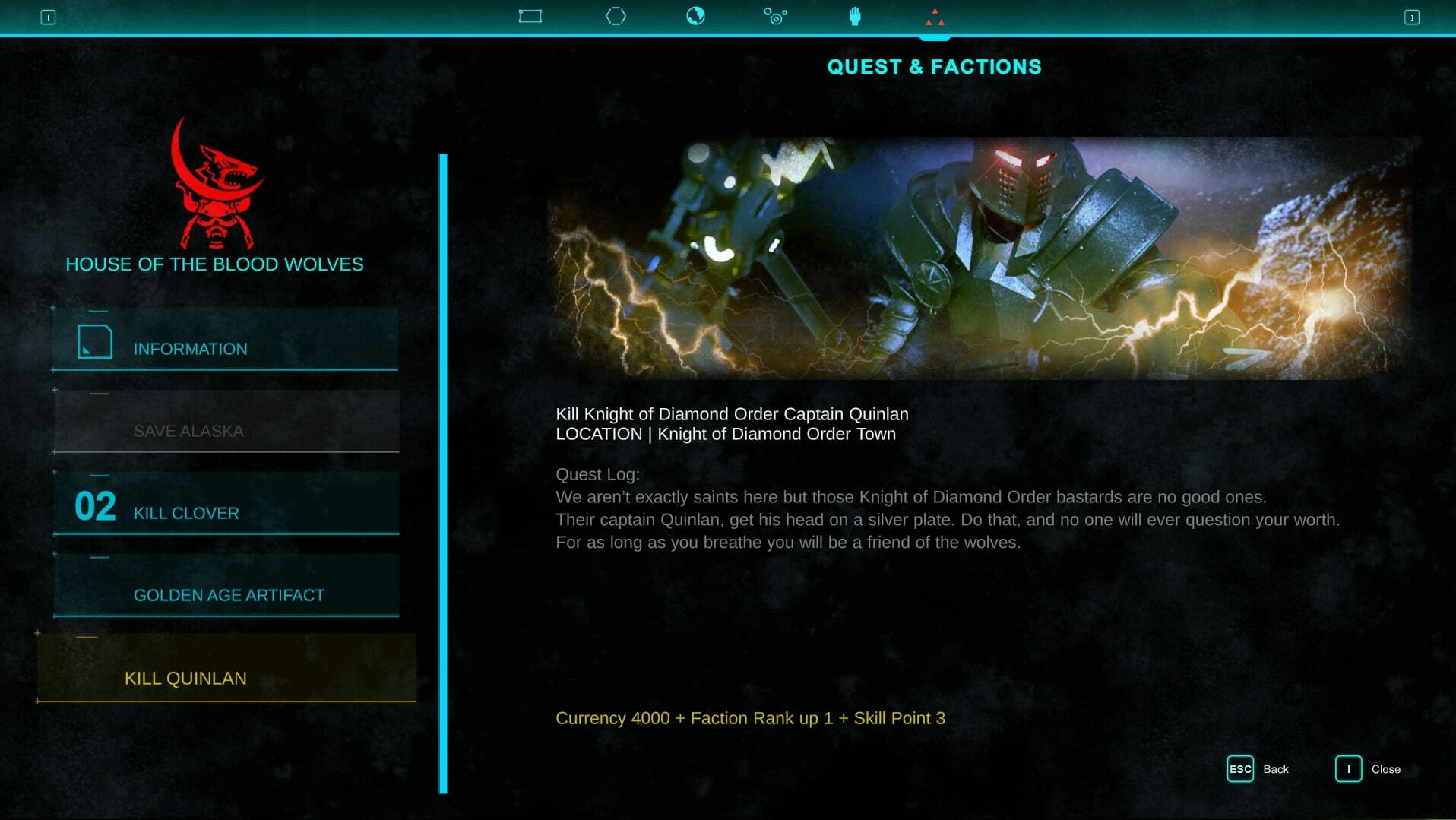 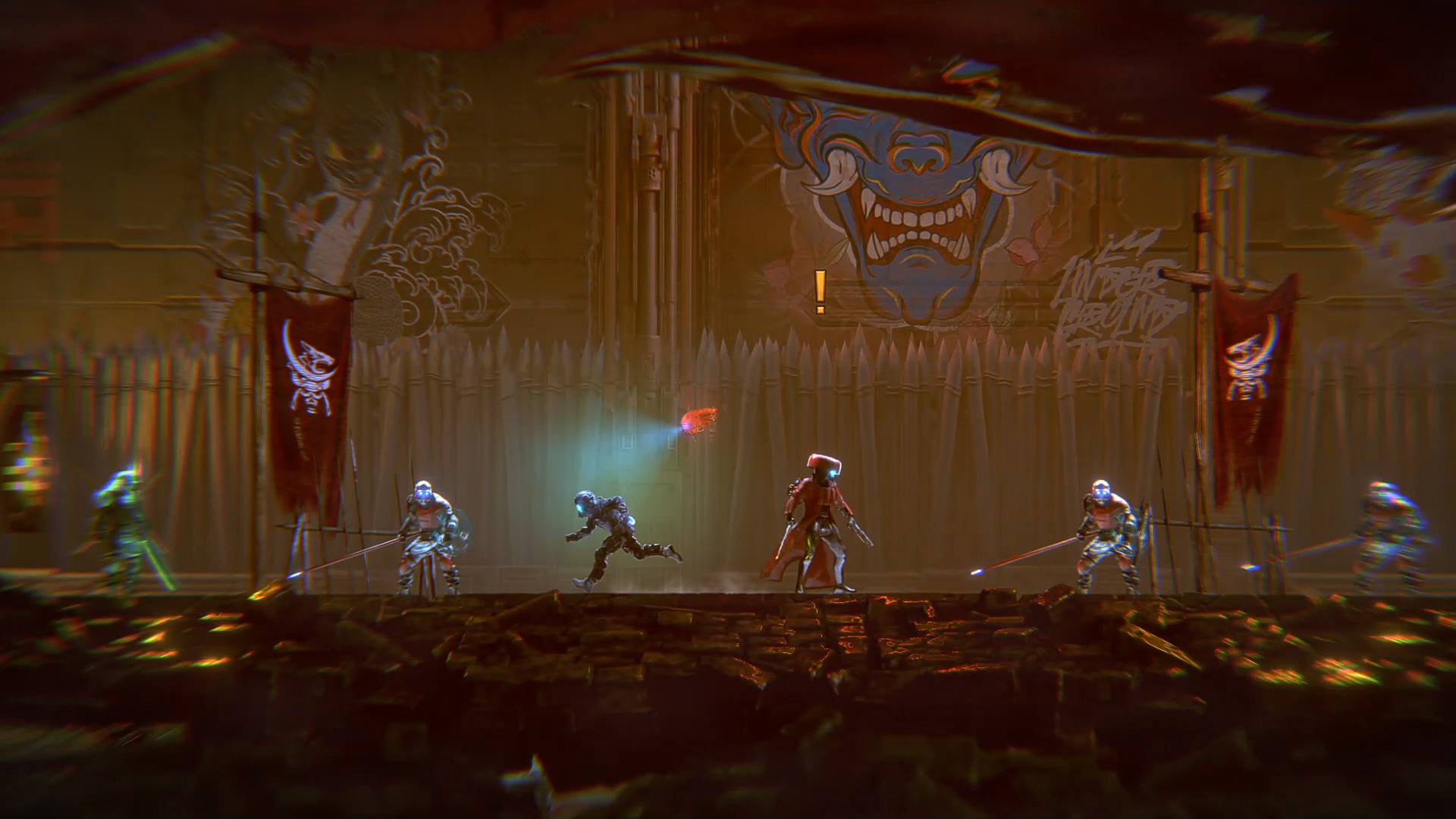 
You can now develop permanent skills starting from getting a skill-drone from one of the Factions, so you should pick a side wisely. Knight clan is a lightning skill-based faction while the Wolf clan is a Blood skill-based faction. You will have chances to temporarily taste their skills from random totems in the maps, just remember the signs of their totems once you come across one. In the previous update, we have already introduced most of the lighting totems in the maps, therefor veteran players would be very familiar with the lightning skills. 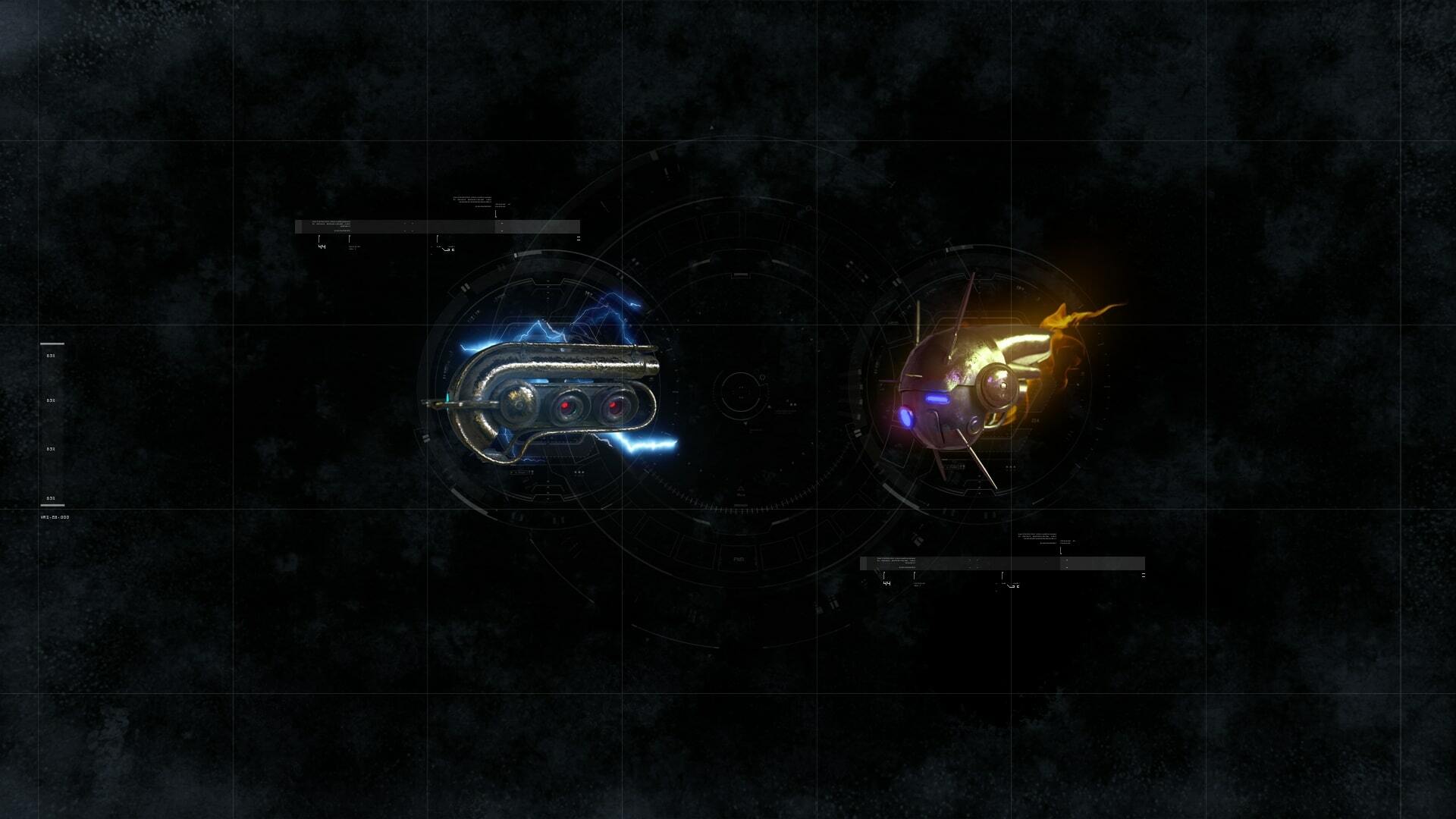 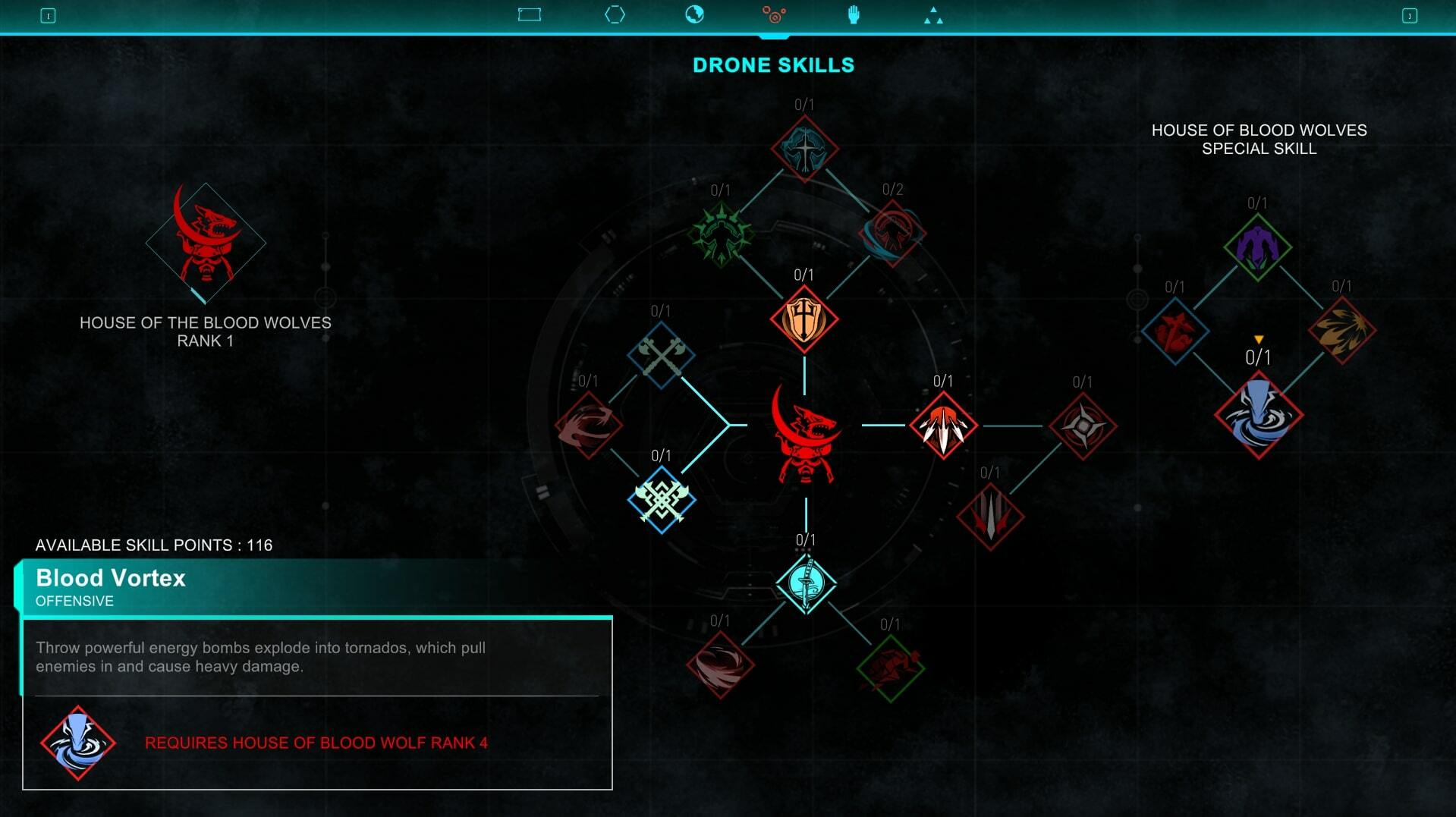 In this update, you can now also taste and permanently gain below blood skills:

-Whirlwind: Transforms your arm into a weapon and whirlwind through your enemy.

- Slice and Dice: Release a group of shuriken to hitting enemy multiple times.

- Battle Blade: You will do a battle shout, which will create a ring of blades to damage the enemies around you.

- Silver Blood Strike: Fast teleport and strike down enemies with massive damage. ( you can change the direction of the strike in the air with analog stick)

- Blood Volley: Summon two small attack drones to assist you in a period,
in sync with your range weapon.

- Blood Seeker: Release a ring of blades that seeks and attacks enemies, then returns to you.

- Curse of Sorrow: Your melee strike will have chances to cause blood damage on enemies.

- Blood Lust: After slaying, an enemy, your next attack or special attack will cause extra damage within a short period.

- Blood Power Shield: Blocks enemy attack damage by a percentage in a short period of time.

- Blood Orders: Temporarily extend maximum drone energy and your health by a percentage.

- Blood Droid: Summons a combat droid fights for you until its death.

- Curse of Blood: Your special melee attack will cause blood damage on enemies.

We have also added more powerful lightning skills on top of the existing skills:

- Dash of Death: Your dash leaves a lighting trail that causes damage to incoming enemies.

- Shock Wave: a percentage chance to cast a wave of lighting with melee.

- Vengeance Strike: When you take damage, you will inflict lightning damage on surrounding enemies.


The New biome - The lost Kingdom


To hold everything together, we have created a whole new world whose contents. In the lost kingdom, you will explore the post-apocalypse ruins of an old government district, The great swamp result of a failed artificial sun built by celestials, and the Underground Chamber abandoned lab with hidden treasures. 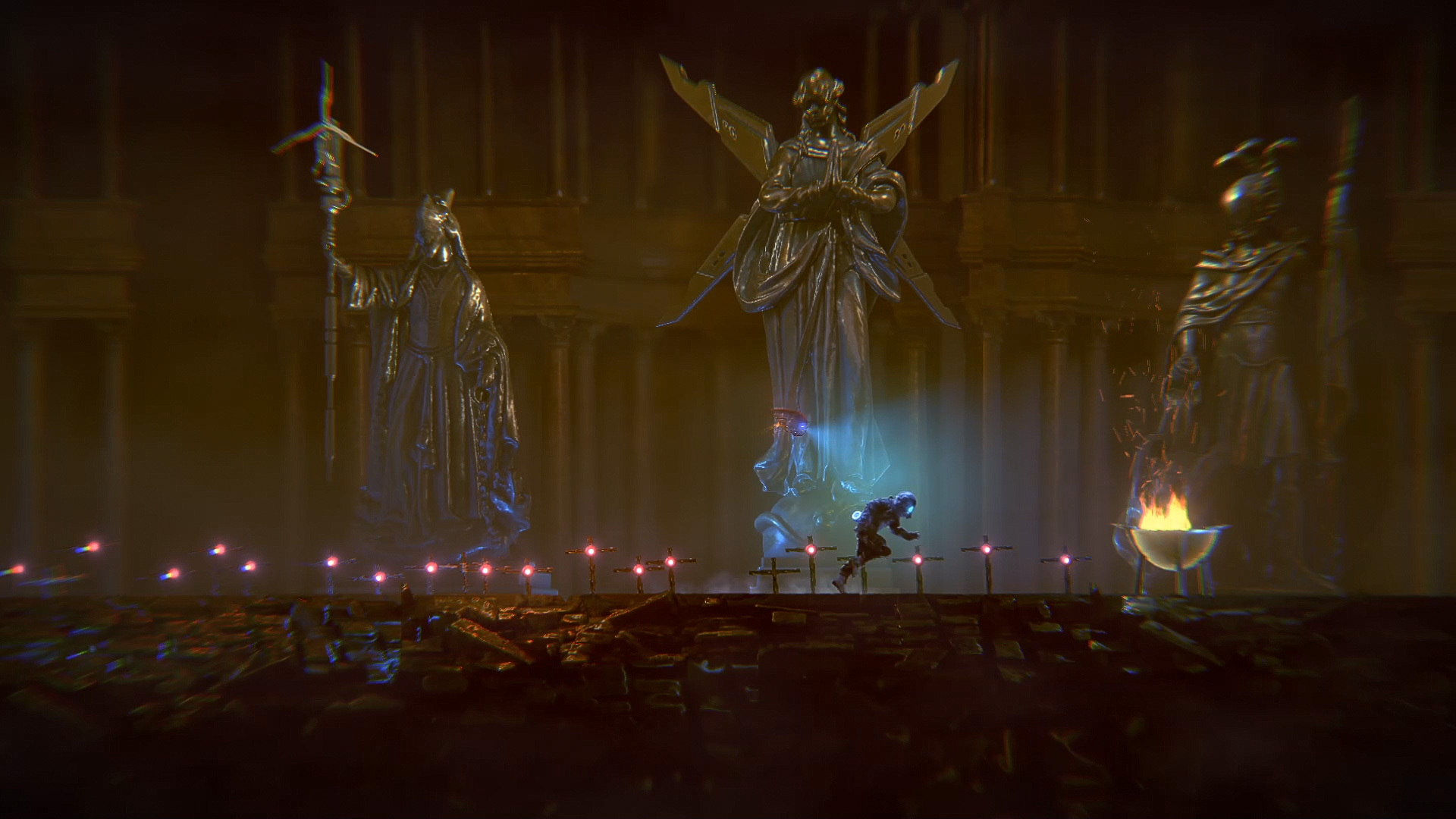 
-Three main large maps: The Underground Chamber, The Great Swamp, and B40 Megastructure

-Two special scenes: The old Chancellery and The Blood Temple

-Three + One Boss scenes depend on a player's decision to play. 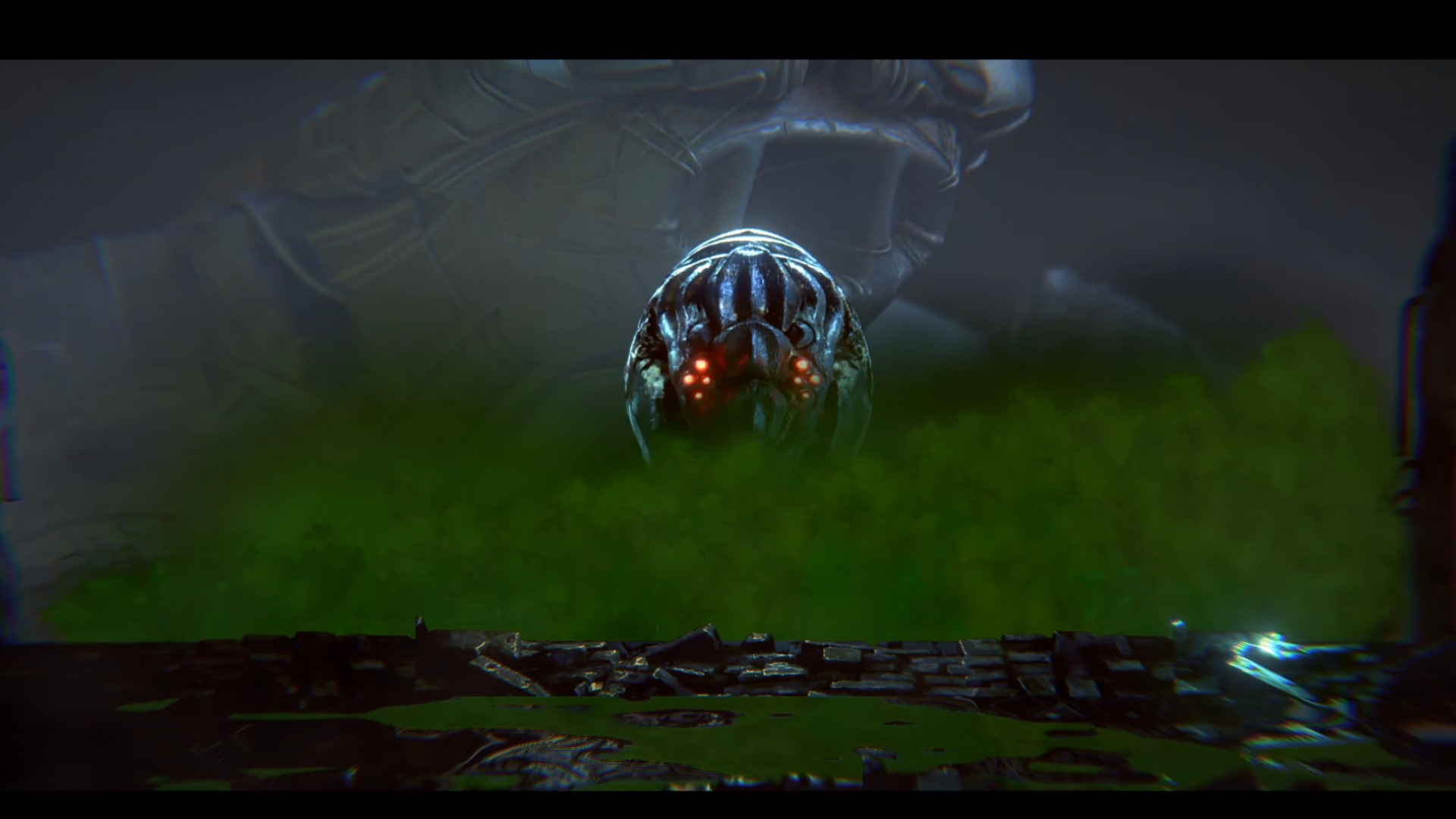 On top of that, we have added two more special quest maps in world 1 and world 2, waiting for you to explore.

Therefore, the current contents have almost doubled the size of previous contents. Also, players will have multiple ways to play.


We have developed four types of human liked enemies which you will come across in the new world. They have more intelligent behaviors compared to old enemies. Also featuring player execution behavior to those new enemies. Therefore, you will have a much more exciting and challenging combat experience. 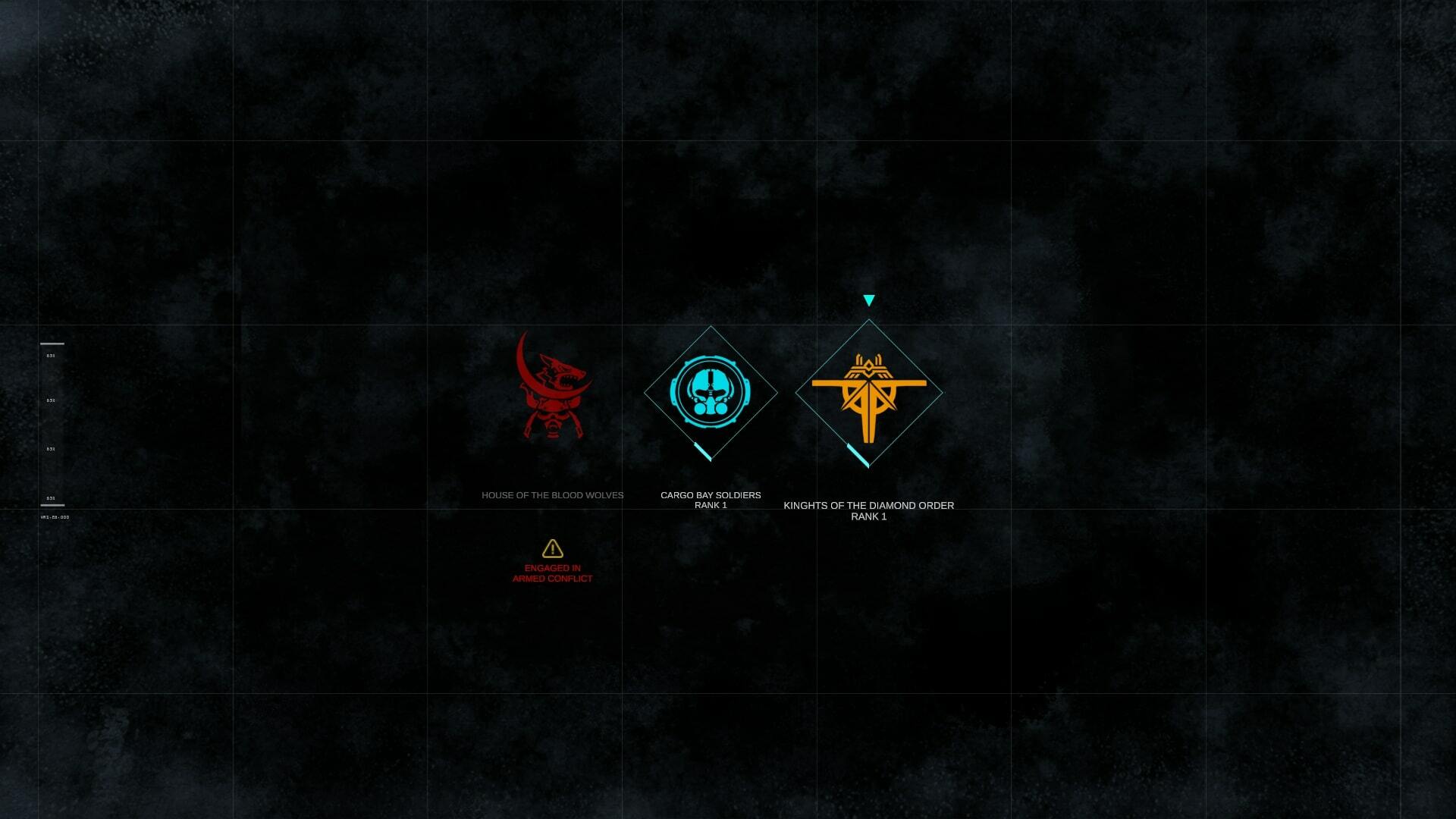 We have listened to our community feedback and advice to balance and refine our game. However, due to the huge content development workload, we could only cover a small amount of the balancing and refining jobs:

-Adjusted the system for the new players to have an easier start when first into the game. Then the difficulty will gradually increase when you start to level up, so the hardcore players can still enjoy the challenge.

-Increased the attack range of all ranged weapons, so you can hit enemies from a further position.

-Increased chance of stackable health supply and higher value for each heal.


There are still several things on our to-do list which we are planning to include in the next patch update:

-To create a smoother combat experience we are going to separate Range weapons into ammo systems.

-Improve on hit experience by adding in controller shake.


To help us improve the game, you are welcome to provide feedback in our community hub or on discord https://discord.com/invite/x2rAp3f.
For work in progress updates, please follow us on twitter and help us to spread the news.

Thanks for all your patience and support!
Click to expand...

When a dev can't decide what their game is going to be when it grows up, they try to make it everything.

Needs crafting mechanics and procedurally generated open world for me to be interested, not enough buzzwords as it is.

Metroidvania games generally suck now. If you're gonna make games like these use Contra 3 as your template and scrap all the fake "RPG" bullshit.
Click to expand...

Even better, take Contra: Hard Corps as your template.

After our last major update, we received a lot of feedback. We are gratified that more and more people are enjoying the game, which means our effort has paid off.
We also understand there are still flaws in the game. After analyzing community feedback,
we have been working very hard in the past 3 months to polish the game, and come out with this refine patch before our final release.

Here is the detail on what has been improved:

We have redesigned the world map interface and combined the current four major worlds into one big map. Players will now have a clearer vision of the whole Dark Light world, also a better direction on portal travelling, boss locations, re-spawn points, keys and activate quests locations.

Player attack and combat hit impact refine
Added hit-stop system in melee combat, which will give players a dynamic on-hit experience, depending on the use of different weapons to attack different enemies.
The newly designed visual effect and improved sound effect add extra layers of impact.

Other player refine and bug fix

-Refined player double jump that when the character is in the air, there is a buffer time for the player to do 2nd jump.

-Run to stop behaviour on ledge preventing the character from falling from platforms.

-Refined climb animation that the character now has a smooth action when climbing passable floors and ledges.

-Player will no longer take damage when using the teleport skill

-Less currency is needed when upgrading health and stamina levels.

-Healing orb is now increasing your health by percentage instead of actual value.

In the next few months, we will be concentrating on developing the content for final release.
We are currently working on the last area of the map, also designing the final bosses.

As we have mentioned in Early Access notes, the price of Dark Light will be increased slightly upon game completion. We'd like to take the opportunity to make this notice that our price will change from $14.99 USD to $16.99 USD (Or your regional equivalent) by 8th July 2022.

Here are the reasons we are making this adjustment:

- To keep our promise and to be fair to the players who supported us during Early Access stage.

- As required by Steam platform, to be able to run discount promotions when launching the final version, we need to adjust the price at least 30 days before the final release. We will have more freedom to set the release date once adjust to the final price.

For people who would like to wait until the full release, there is no need to be hurry as there will be a launch discount during when we leave Early Access.

We greatly appreciated your patience and support. We also need your help to make Dark Light grow, so please join us in Discord [discord.com]or follow us on Twitter. Meanwhile, you can also help by leave a review on steam to share your thoughts.

Thanks for your attention!
The Team (Jimmy, Michelle & Kurt)
Click to expand...