This is a User Interface modification which in combination with Bigg's Widescreen Mod makes any resolution, above or equal to 800x600, viable for Planescape:Torment by changing a number of things in the User interface.

It all started with Bigg's mod that allows you to change the resolution in all of the infinity engine games. Bigg's mod is great, but especially in Torment when you change the resolution, almost all of the UI elements and game effects are shown in the top-left area , and the rest of the UI is chopped up. So what this mod does is that it centers all these elements and enhances the UI with original game art to fit nicely any given resolution.

This began as a joint effort with Taplonaplo. Without his help, findings and solutions the mod would have never reached this stage. I have made all of the visual changes and Taplonaplo has provided many of the code tweaks and exe offsets.


Here is a video demonstration of the mod :
(^It's a bit old though now. The dialog window has been revamped since then)

1680x1050. The background is from a promotional game poster:

1680x1050. The lady's faces are there not just for remind you she's always watching, but also to avoid some tooltip flickering problems.

Dialog Window:
The area of dialog text has been increased almost to double size and the background has been made slightly darker for easier reading.
1024x768:

1680x1050: The area of dialog text has been made larger and the background has been made darker for easier reading. Since v1.2 the text area has been centered.

Bigger Fonts
Bigger fonts are provided for those that find the original text too small. The new fonts are more clear than the original and are applied only to the Dialog/Journal windows and to the floating text. You get to choose from 4 different sizes. Check the pic for comparison :

Options:
1680x1050. The background is from a snapshot from the cinematic intro.

Journal:
1680x1050. The background is from another promotional game poster.

Spells:
All Spell effects and animations are now centered:

1. First of all you should make a full install of Planescape Torment. The Full install is not the "maximum installation" option from the game installer, it's a manual procedure. You can find instructions on how to do this,here
2. Install Bigg's Widescreen Mod with your desired resolution.
3. Extract the rar archive into your game directory.
4. Run Setup-PST-Widescreen-UI.exe
5. The mod will detect if the Widescreen mod is installed and in what resolution and then install the appropriate UI elements.
6. Afterwards you'll be asked if you want to install Bigger fonts. If yes, choose your language and desired size. You get to choose between 3 different sizes. I strongly recommend trying them out if you're using bigger than 800x600 resolutions. Of course it's always a matter of resolution, screen size and distance.

Always uninstall the old version if you are to install a new one.


- Compatibility:
- Many Thanks to (check the readme for more details):

- Many thanks go to TAPLONAPLO who has done a fantastic job at solving almost all of the technical problems that appear when you change the game's resolution. Without his findings and fixes, this project would probably never have reached this stage.
- Many thanks should also go to THE VANISHED ONE who helped me a lot when I started editing the UI and has also provided WEIDU code for the version check and also the code to resize the MOS files. I was inspired to make this mod by the Vanished One who is making a similar mod for a PST 1024x768 UI resolution.
- Qwinn, For helping me with WeiDu code questions and for making some great PST mods. He helped a lot with his replace script.
- Weak-ling, a member of the Gibbrlings3 forums , who has found the action box and tooltip offsets.
- The Bigg: For creating the amazing widescreen mod for the Infinity engine games.
- Scient (member of the shsforums) for providing the modified code for the journal pics and loading bar.
- Haen, for providing his awesome font bam generator, which I used to create the new fonts. You can find it here
- All the people that tested the bigger fonts for the various languages.
- a9214, yyfeng and maoliyuanjiu for adding the appropriate offsets for the Chinese version of PST and to Mephisto Devil Satan for testing it.
- aqrit for providing the offsets to stretch the movies to full-screen.

Surprise (I never asked for this) Update!

I tried playing EE but found it blurry and with a small dialog window. So, I fired up my old game using my good old UI.

Then I decided to do some fiddling around...

Installation: Just extract the override folder into the main game directory and copy over as asked. 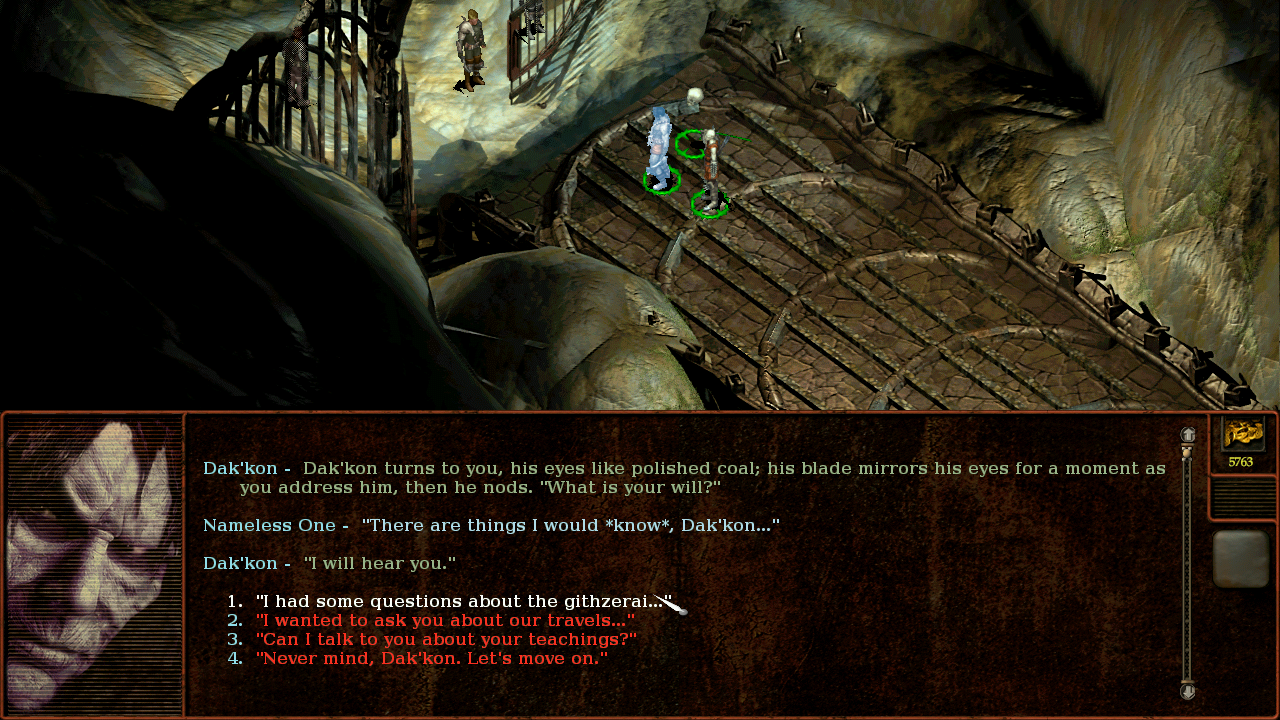 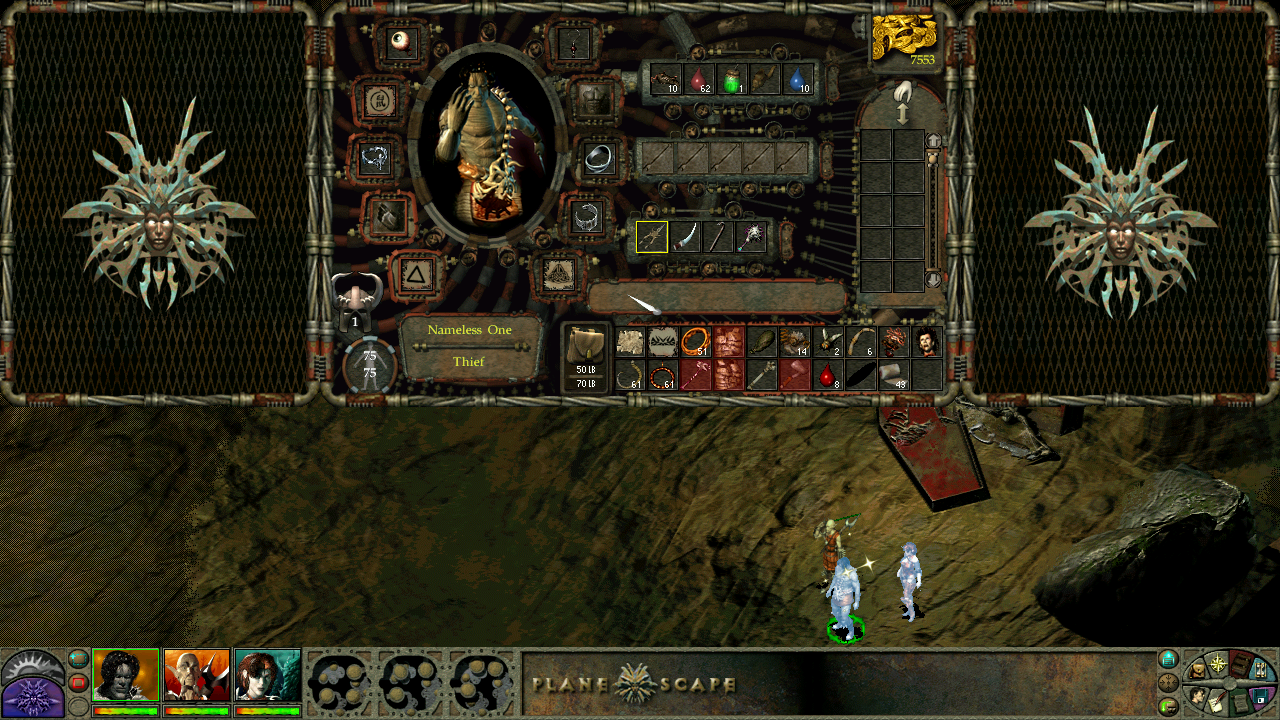 Based on the excellent Tchos portrait mod. Alternate (mostly) drawn portraits of NPCs and party members. TNO's Inventory portrait changes according to the weapon as in the original but instead of the ragdoll you get a bigger portrait. 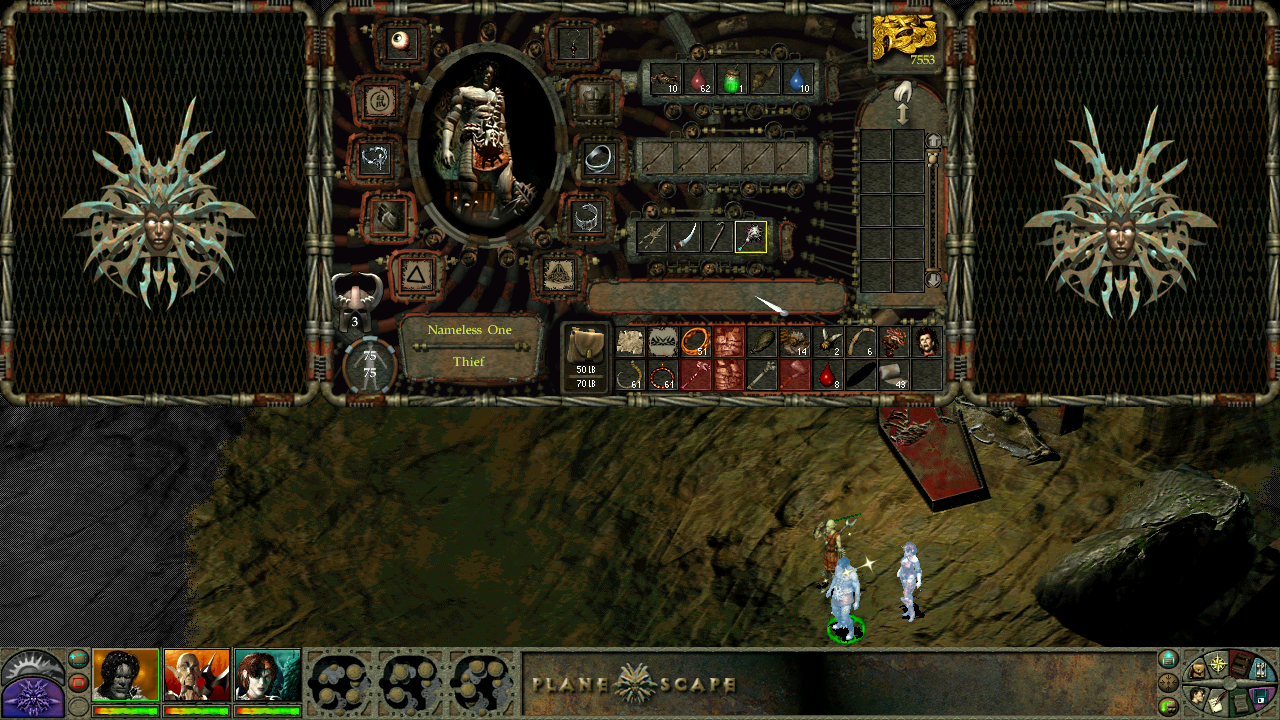 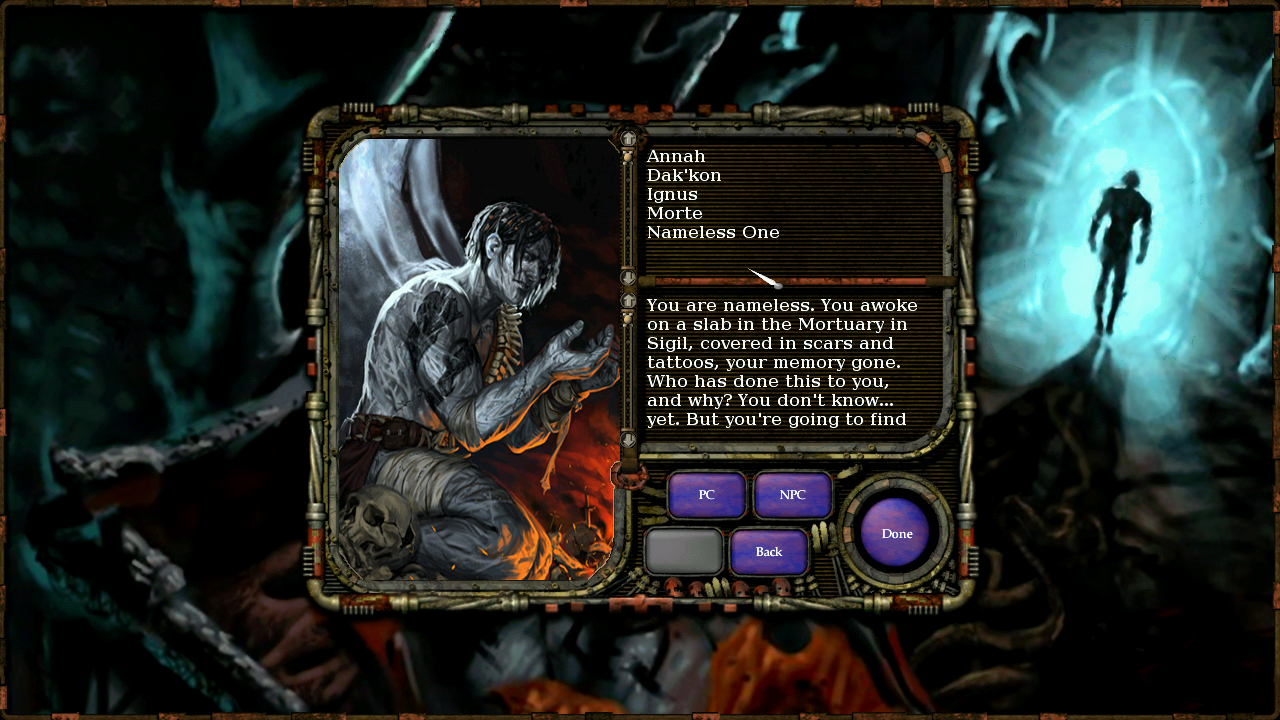 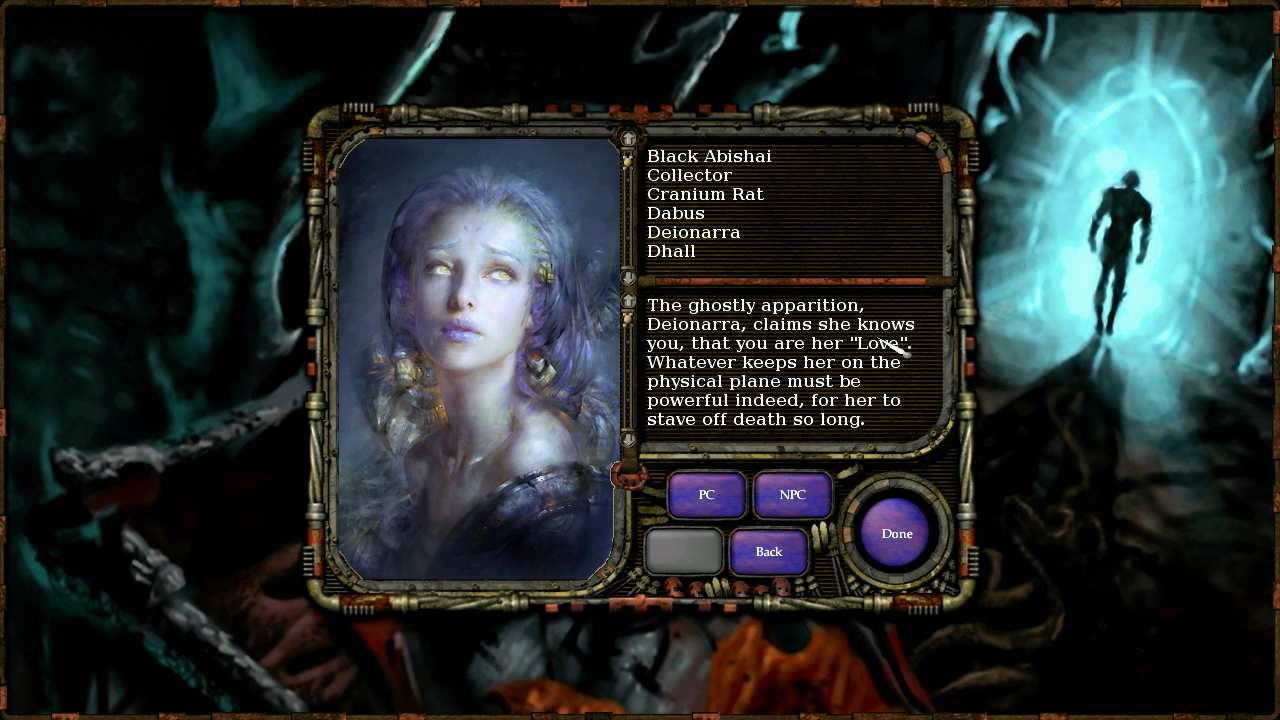 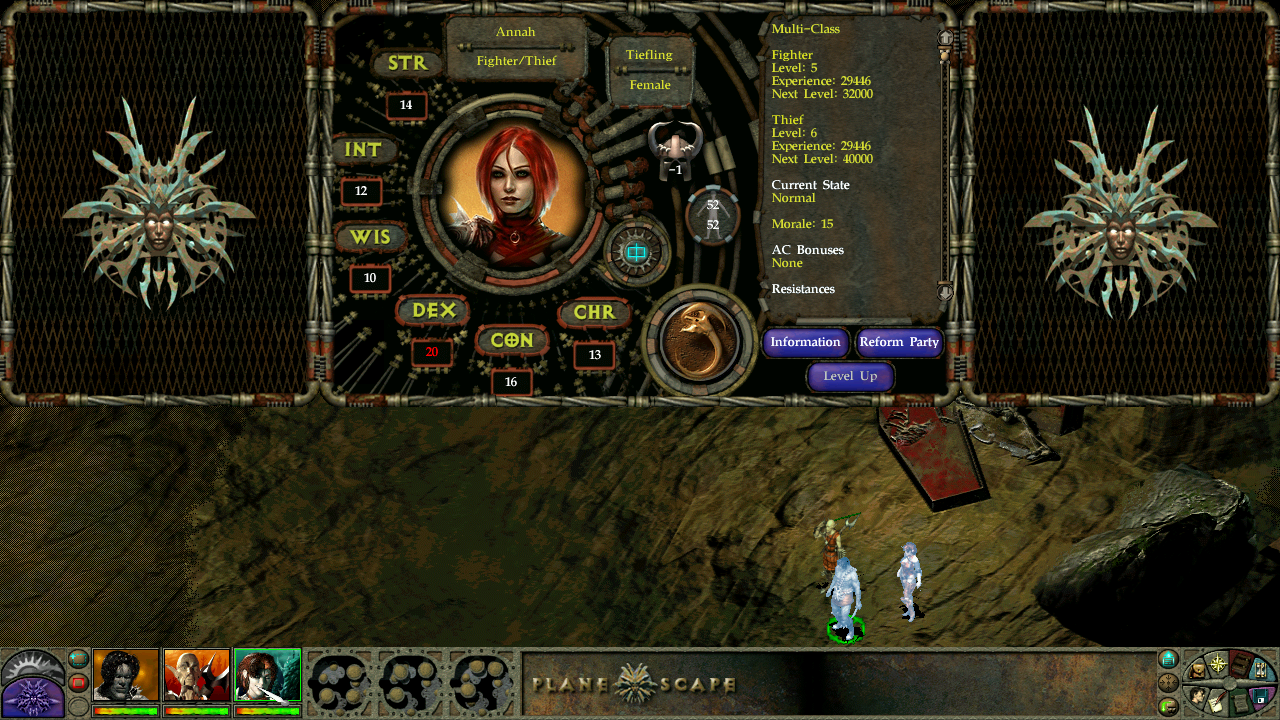 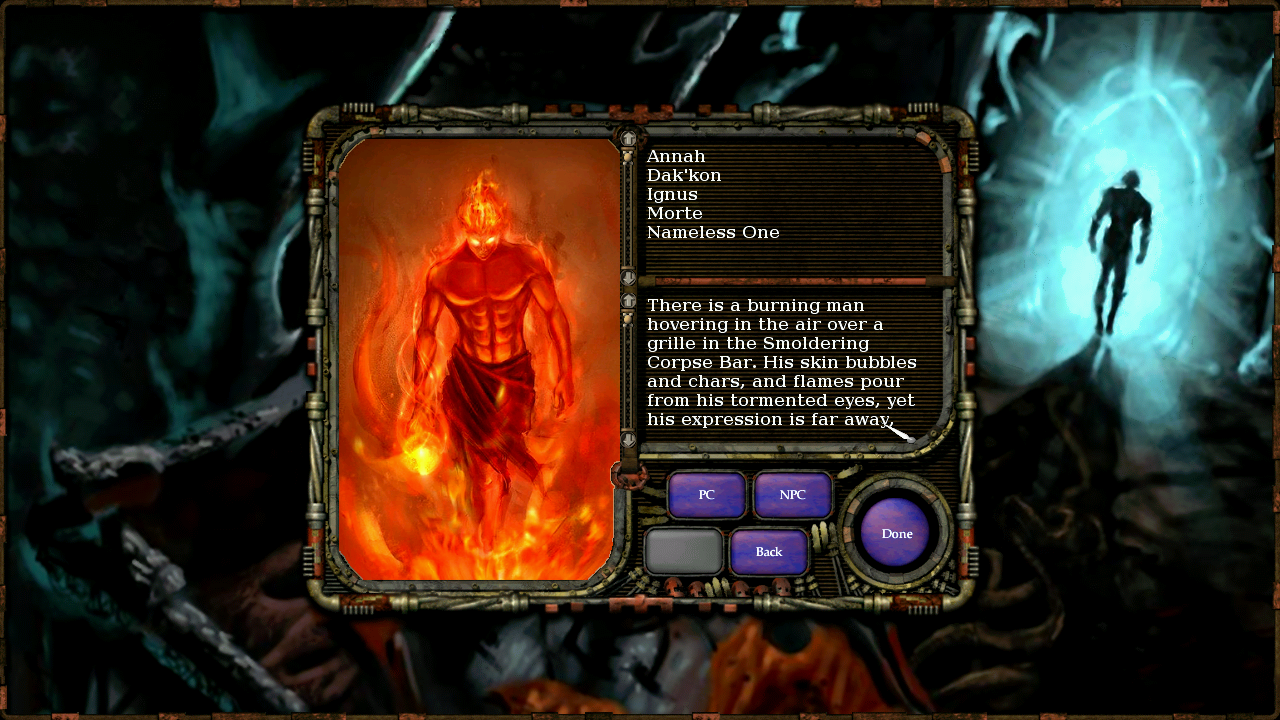 Now that looks fucking sweet. A game worth playing that will no longer look like shit on my lcd due to low resolutions. Plus this game has a good camera.
Every good game has already been released. Nothing good will be released from now on.

racofer said:
all i care about in rpgs is the camera.
Click to expand...

That's the least of the reasons why PS:T is better than NWN2, and you know it.

Location
Treading water, but at least it's warm

I'm glad you like it. I wondering if anybody has a non-english game version. In fact was Torment officialy published in another language? The way wikipedia makes it look, is that it was only published in english and only some fanmade translations exist.
GhostDog's Planescape: Torment User Interface Mod - A high resolution UI mod to accompany/fix/enhance the widescreen mod for PST.

racofer said:
all i care about in rpgs is the camera.
Click to expand...

That's the least of the reasons why PS:T is better than NWN2, and you know it.
Click to expand...

Considering the camera is the interface used for one to perceive the game experience, I disagree. Camera is everything.
Every good game has already been released. Nothing good will be released from now on.

Rasputin said:
For someone who is very popular here, you have a very shitty taste in video games.
Click to expand...

1024x768 is the biggest 4:3 resolution this game can be played IMO, anything bigger and the text and other game elements will be too small to read. (Unless you have a 23 inches 4:3 monitor, or something)
GhostDog's Planescape: Torment User Interface Mod - A high resolution UI mod to accompany/fix/enhance the widescreen mod for PST.

So how do these sound in french? :

will it work with savegames already made with widescreen mod that was set to 1280x800 too?

hmm, you're right about the widescreen mod, if you don't start a new game in PST it seems you get a lot of crashes...

Anyway you can install the UI without fear I think. I've installed and uninstalled it many times without problems, but I've not tested it extensively , so there is a possibility for things to go wrong.
GhostDog's Planescape: Torment User Interface Mod - A high resolution UI mod to accompany/fix/enhance the widescreen mod for PST.

This is the first version of the UI mod. Some backgrounds are not perfectly centered (they are straight from the 1280x800 UI) but it should look fine.

PS: I used taplonaplo's code to resize the journal pics on the fly , in order to reduce the size of the mod, so it may take a while to install (about 7 minutes).

It's not the finished product but it should work fine for anyone who would need such a resolution.
GhostDog's Planescape: Torment User Interface Mod - A high resolution UI mod to accompany/fix/enhance the widescreen mod for PST.

Location
I've been there

Nice work! Was dying to play this one again but decided to wait a while when I saw the other thread.

Not working for me...

Thanks for the great Mod, I played through PST for the first times a few years ago and fell in love with it and when I read there was widescreen support I knew I had to try again.

But I'm having trouble. When I try to start PST I get an assertion error (not sure exactly what it is since I don't have it handy). Here's what I've tried:

And it doesn't work, am I doing something wrong?
Thanks!

what's the exact assertion error, and when do you recieve it (if on startup, does it crash before or after the movies)?
Your installation should be fine btw.

The error happens when I try to start Torment, it doesn't even get to the movies.
The exact message:
An Assertion failed in F:\Torment\Source\chitin\ChVideo.cpp at line number 4322
Programmer says: No valid video modes supported.

Which is a bit odd since I don't have an F drive on my entire system.

Also the normal widescreen fix seemed to install just fine once I realized I had to do a full install first *facepalm*, the the 1280x800 mod had a few warnings when I installed it. Here is one of the warnings from the debug file at 3920:

^ I have the exact same error, although I'm running the 2 CD version. Had the same types of warnings during install. Please advise.
You must log in or register to reply here.