This is coming out in a couple of days and it looks like it won't be an early access release (a rarity for this genre). there is a demo avaiable.

The blurb on the store page invokes only Heretic but the hub structure, combat, visuals are much more Hexen. Which can be either a positive or a negative depending on where you come from but I'm definitely in the first category.

So try the demo or of course feel free to bitch about the game without ever planning to play it.
Last edited by a moderator: Jun 18, 2022 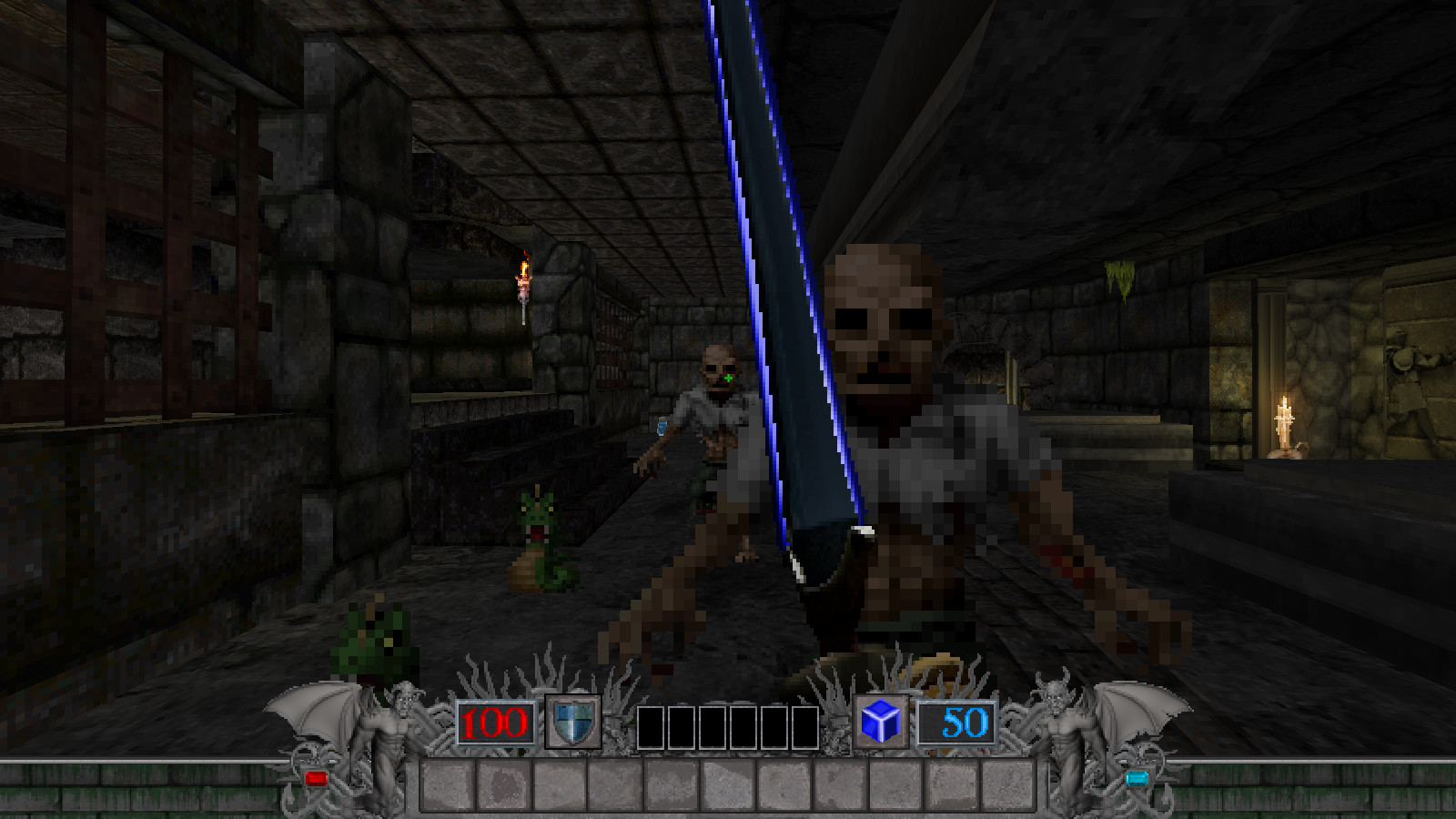 More fine gameplay and commentary, brought to you by your resident Russian vtuber femboy!

The demo is fun. It does suffer a bit from being such a direct copy of Heretic/Hexen - you're using a weak-ass wand to shoot bat-gargoyle-things who are flying around shooting fire at you in a brown and grey ruined castle, they could literally release this under the name Heretic 3 or Hexen 3. But it is a quality product and plays well. Seems like it has quite an interesting range of enemies and weapons too.
I still can't brofist or give ratings. Please just assume I've brofisted every post in every thread.

Liked the demo enough to buy this. It's fun. It's basically just Hexen (maybe leaning a little bit more toward Hexen 2 than the original), but with the twist that you're a shapeshifter. There's plenty of weapons and they're fairly effective and fun to use, but ammo is scarce enough that you're forced to use your various forms frequently, so the shapeshifting mechanic feels fully integrated into the game and not just a lame gimmick to let you past the various Metroidvania ability gates.

Recommended, toss it onto the pile of throwback shooters marked "NOT SHIT".
I still can't brofist or give ratings. Please just assume I've brofisted every post in every thread.

The issue with this for me is that I hate Hexen's guts. I mostly hate Hexen 2's guts too. The puzzles are annoying, you never feel smart or satisfied when you figure it out, it's always an annoyance and a door hunt in samey-looking mazes. If this is more of the same, it's really not the thing for me.

Haven't come across anything as bad as Hexen 1's switch hunting so far. The game works similarly to Hexen with the hub areas where various portals must be unlocked to travel to different maps, and you've got to keep coming back to the hub to bring newfound keys and items, but there's none of Hexen's "one ninth of the bullshit nightmare puzzle has been completed" crap with switches hidden in the most obtuse locations.

Most of the puzzles are about navigation, like, the object/key/switch you need to reach is usually fairly clearly visible and the challenge is to figure out how to get up to it. After you get your shapeshifting abilities, the puzzles become more Metroidvania-y. For example, you reach a huge pool of lava that kills you when you walk on it, but you can see a key on the other side so you know there must be a way across. A bit later in another map, you find a Demon form power-up which allows you to walk across lava unharmed, so you know to travel back to the lava pit from earlier which you can now cross. Another example, you see various cracked walls in the first episode. Later, you get the Golem form, and the game tells you that it can punch through cracked walls, so you know to go back to the janky walls you saw earlier to smash through them to access new areas. Stuff like that.

There's also an objectives screen that really helps by telling you which map you should be searching in, plus a hint of what to do. Basically, imagine Hexen 2 with somewhat more intuitive map design, and the game giving you reasonably clear hints on what to do next. And much better combat.

The only real problem I had so far was navigating E1's hub area, which is a little bit sprawling to the point where it can be tricky to remember where the portals to each map are, but it's not too bad. The demo is pretty lengthy, I think it's the whole first episode, so you can get a thorough feel of the game from that.
I still can't brofist or give ratings. Please just assume I've brofisted every post in every thread.

Not really seeing how you play a necromancer. The title suggests controlling hordes of the undead, not shapeshifting and casting various missile spells. First inspection reveals no summoning or pets, should probably have been called 'Hands of the Shapeshifter' but guessing that doesn't get as many points on the 'cool title board' as necromancer.