Think about hairy dwarfs all the time ( ͡° ͜ʖ ͡°)

Grand Chien, a nation of rich natural resources and deep political divides, is thrown into chaos when the elected president goes missing and a paramilitary force known as “The Legion” seizes control of the countryside. Now, the President’s family has pulled together all their resources, including an arrangement with the powerful Adonis corporation, to hire a group of skilled mercenaries tasked with finding the President and bringing order back to the country.

In Jagged Alliance 3, select from a huge cast of mercenaries all with their own unique personalities, quirks, and backstories. Then go out and explore Grand Chien as you meet new people, earn money, grow your team, and ultimately make your own decisions that will decide the country’s fate.

Jagged Alliance 3? again! ><
"I must remember to be kind" -Nick Cave

I know this will upset a lot of people. Let me help.

Upcoming role playing games thread will be continuously updated as long as I am active on RPGCodex:
https://rpgcodex.net/forums/threads/upcoming-role-playing-games.119870/
I am bound to miss several games. Please, feel free to post suggestions.

Same development studio that did the recent Tropico games. Chances aren't good for it being decent.
https://en.wikipedia.org/wiki/Haemimont_Games

Like Expeditions: Rome, this will be getting regular dev diaries: https://community.jaggedalliance.com/

This is YOUR community, so we hope you enjoy making new friends and discussing games. Please feel free to post any suggestions or recommendations you may have, and we look forward to getting to know everyone. Be good to one another, enjoy some fun, enlightening conversation, and help us create the best community we can!
Click to expand...

All Good Things Come in Threes: Jagged Alliance Finally Gets a True Successor

Sofia, Bulgaria / Vienna, Austria, September 17th, 2021: Fans have been waiting for decades, to see the third edition of the legendary strategy franchise Jagged Alliance. The strategy game experts from Haemimont Games, well known for their work on the Tropico-Series, Surviving Mars, Victor Vran and many other great games will finally create a true successor to the beloved series. This time, the player takes command of a mercenary organization in the fictional country of Grand Chien - a land thrown into chaos after a brutal paramilitary force known as "the Legion" took over. Jagged Alliance 3 will combine tactically deep, turn-based combat with exploration of a large game world with strategic elements including gaining control over territories, training local forces, and establishing multiple squads chosen from beloved mercenaries - all well known to fans of the series. Jagged Alliance 3 will have RPG-elements like special perks or level-ups for your mercenaries, as well as looting and customizing your arsenal of weaponry. Coming to PC, Jagged Alliance 3 will also feature a co-op multiplayer mode so you can free Grand Chien together with a friend.

Check out the announcement trailer: https://youtu.be/48b3BIU7vVY
Get more info on the games' official website: https://jaggedalliance.com

It's hard to get upset over a franchise that has already been raped several times.

Looks like some kind of nuXcom clone.
Take your gold, you greedy old son-of-a-bitch. Take all of it, no need to say thank you. Because this is for every developer's decision based on market research. This is for every unasked-for innovation. This is for every piece of marketing bullshit that claims human beings are all too stupid to understand basic maths and that removing core elements isn't dumbing down. This is for every excuse, every lie, every justification for making bad games, bad RPGs, and getting rich off the profits from them. - grotsnik

It can't get worse than previous incarnation

This is so fucking disgusting that I had to open the vodka. 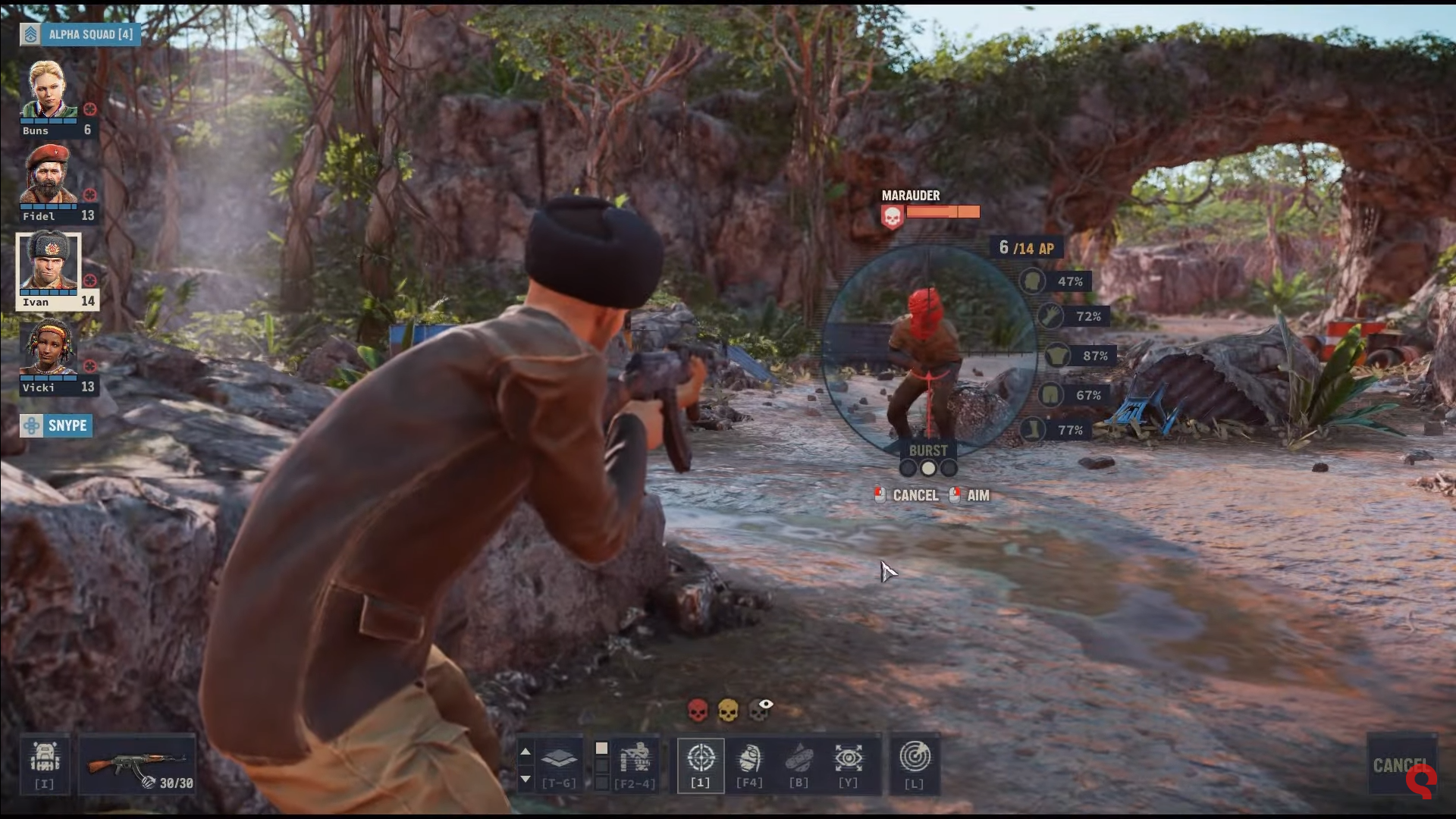 Yeah but phoenix point is shit.

I feel nothing tbh, perfectly numb.

In PP you waste time pixelhunting, in the video the player just clicks an icon.
My expectations are low but calling it a nuCOM clone is just wrong.

Rotatable 3d isometric cameras with zoom were a mistake. The fact they usually accompany games with a modest budget makes them even more egregious and the games they feature in unanimously aesthetically unappealing.

This doesn't even look horrible, just generic I can't even be really angry at it, I am disappointed.
Life is too short to play subpar games.
Harvey Smith on Far Cry 2

The game stands as the shooter title that has given me the most compelling, player-driven moments to date.
Click to expand...

THQ Nordic noted in a briefing event that Haemimont approached the publisher with a pitch for something more akin to a Jagged Alliance spinoff. THQ Nordic was so impressed with the presentation that they proposed Haemimont finally make the actual sequel to Jagged Alliance 2.
Click to expand...

Firaxis XCOM quality is probably the ceiling for this.

At least I give credit to them for showing gameplay in the announce trailer, which nobody does anymore

That looks awfully high budget for a turn-based game (contrast this with Rage), so they must have high confidence in the team. Not sure a bunch of fantadomats are worth trusting though.

Swen Vincke's words of wisdom: "I like Roguey's posts. I don't always agree with him, but I respect him."
A list of my favorite movies/shows for those who want to know but lack Library access; 25-33 minute JRPGs

I need lilura to give her take before I form my own opinion.
I Am Ontopoly. Master of Sword and Sorcery, Vagabond, Adventurer Extraordinaire! Slayer of fiends, Fomors, and creatures undocumentable. Upholder of truth and justice and passion; I who slew the Lantern King, The demon Mephistopheles, Belhifet. Tis I who fights the cultists that would bring upon us decline. I am known in Antagarich as the commander, The people of Eo know me as Rune Warrior, They call me Knight of light in Emain Macha. There are those throughout the worlds that would call me guardian, savior, hero. I have seen things and done things you couldn't possibly understand, fought foes you couldn't possibly have faced, and accomplished feats you wouldn't believe. I have traveled to worlds where the laws of physics were subject to the whims of malicious Fae, and worlds where the intensity of the magical powers therein would rend your flesh, worlds that never existed in any known space-time. I Am Ontopoly. It's set in 2000, which explains why Ivan isn't 50+. Good from a gameplay prospective too since the innovations of the last two decades (cheap body armor, cheap optics, cheap drones, cheap sub-MoA rifles, cheap night vision, even an African shithole having cellphones everywhere) are rather detrimental to JA2's gameplay style. Hopefully it isn't full of anachronisms.

Edit: Strangely, the AKs seen in gameplay footage (but not art or pre-rendered footage) all seem to be Romanian ones (note the wooden foregrip). Weird choice and I wonder why they went with that. Maybe they're including progression of AK quality (Chinese garbage that uses pen springs<low quality eastern block<Norinco<authentic Russian<modern tacticool)? Alternatively, the devs are Bulgarian (directly north of Romania), so it might just what they had access to for a reference model and the other stuff is by different artist.
Last edited: Sep 18, 2021

Graphics look very nice, with some nice verticality and tons of cover spots
Tropico developer means they have skill and experience to do some interesting things with the strategic layer of the game. Hopefully they do some daring things like supply lines and construction of infrastructure.
But realistically, I think the result would be taking some elements from Rage and Flashback and polishing them to extreme.

Looks like...
Body armor will not change merc appearance
No energy meter, you can sprint and crawl all over with a HK21 possibly without any penalty...

Wondering about...
How stealth is going to work and multiple deployment of squads
Environmental destruction
M.E.R.C.
Modes of transportation
Skill progression

Interesting note I checked Igor's stat numbers from the trailer to JA2 counterparts and they're the same. No change seems rather weird in this respect considering the passage of time.
You must log in or register to reply here.