I just played the free prologue of this and picked up the full game based on what I saw.

Atmosphere is strong. Pixel art looks like pixel art, but the camera work and lighting give it a sense of cinema.

Example: the camera drops back to a long shot as the protag takes the pedestrian overpass to his apartment building: 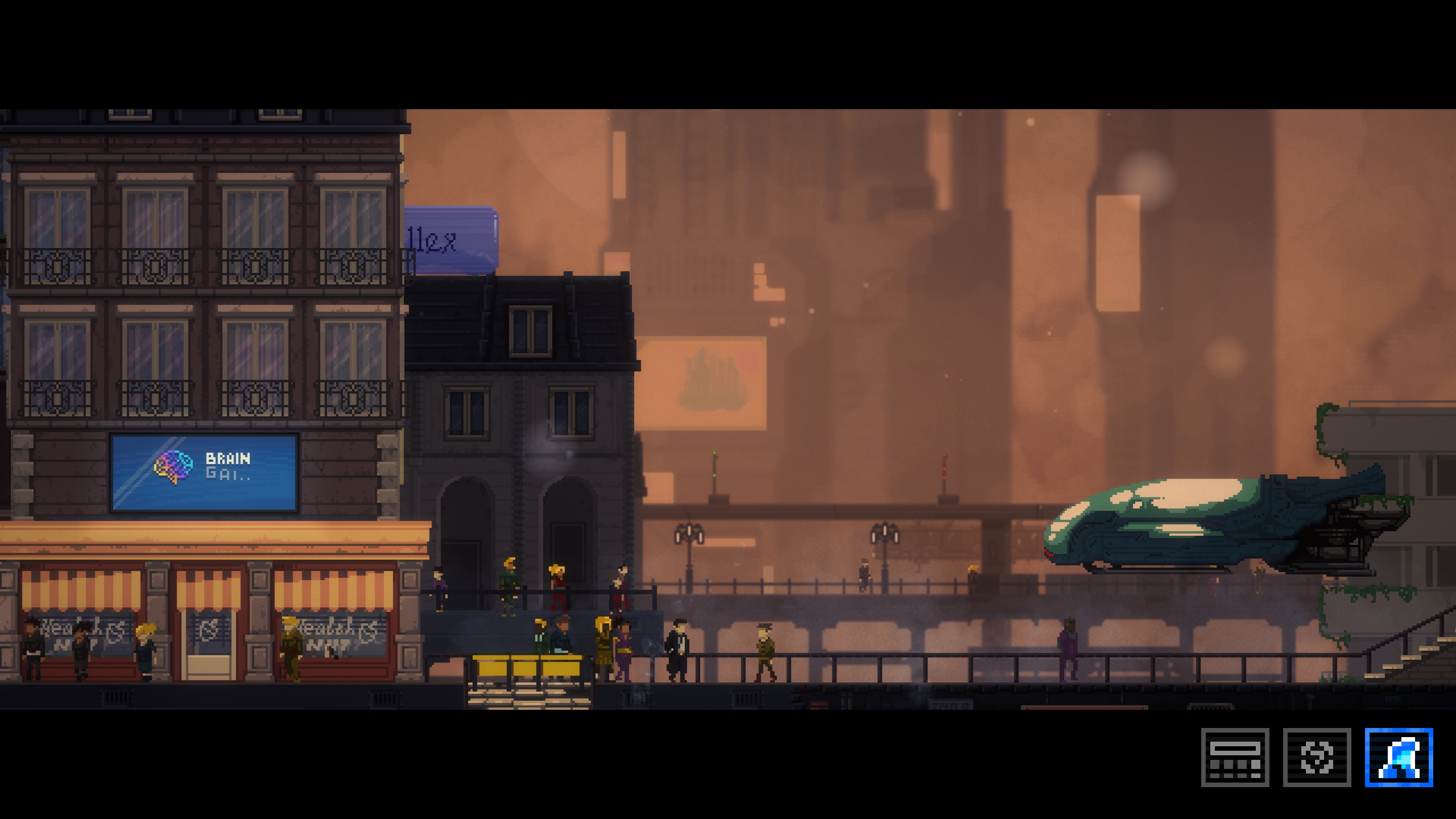 
Does not do the traditional adventure game inventory / combine items / moon logic stuff. The protag does not carry around a broom handle or steal a roll of masking tape in case he might need them later. Instead, the currency for moving the story forward is information, gained by examining the environment and conversing with the cast. A constant, rolling autosave is used, meaning there are no do-overs in dialogue.

The rubber meets the road in the "Sheets" system, which is a fancy way of saying the game quizzes you periodically to see if you are paying attention. Each "Sheet" is a multiple choice test. Example: based on available evidence, was a rifle shot more likely fired from a nearby hotel or a neighboring casino? You get one chance to answer - and screwing up means consequences down the road. Rolling autosave.

A review I read indicates that consequences are substantial, allowing for strikingly different endings and story pathing. So far I have only seen two "Sheets" and passed them both. The game seems easy for anyone with basic reading comprehension, but still, knowing that any mistake will be permanent and might change the outcome is exciting. Who knows, it might get harder later on.

Lastly, I find the protag relatable, and critically, not annoying. He's a fairly typical burned out guy having problems connecting with his ex-wife and daughter, cliche enough but I warmed to him immediately. Although most dialogue is not voiced, I've enjoyed the classic noir internal monologues so far, which are.
Fight the decline, brush your teeth, upvote my Steam reviews. | ♬ khinsider game soundtracks ♬ | Zombra Streams Games Sometimes Twitch link | thread link | My latest musical release ca July 2019 | * Zombra's Completed Games *

Zombra said:
A review I read indicates that consequences are substantial, allowing for strikingly different endings and story pathing.
Click to expand...

And yet, it had a "Linear" tag along with "Multiple Endings" one. So how is it? Different ending cinematic based on a last minute choice?

In addition, Assemble Entertainment donates 10% of the revenues of this edition to Go Give One; a WHO initiative that provides COVID-19 vaccines amongst others for everyone, everywhere
Click to expand...

I can see codexers loving this game already.

Rabbity_Thing said:
And yet, it had a "Linear" tag along with "Multiple Endings" one.
Click to expand...

I don't see the Linear tag there now. Steam tags aren't exactly reliable. As far as we know it was put there by one person fucking around, and got overwritten by more accurate tags in the meantime.


Rabbity_Thing said:
So how is it? Different ending cinematic based on a last minute choice?
Click to expand...

The review I read said:

I played through the game two times, first obtaining a good ending where everything happened just as I had hoped, and then deliberately screwing up every investigation. After that, I used some autosave files that I backed up at the very end of each playthrough (Lacuna uses an autosave-only system, which is normally a pet peeve but functions here as a way of providing weight and tension to your conclusions) to explore the endings. There’s a lot of reactivity based on your decisions and deductions, with the final scenes and character endings having several permutations.
Click to expand...

In addition, Assemble Entertainment donates 10% of the revenues of this edition to Go Give One; a WHO initiative that provides COVID-19 vaccines amongst others for everyone, everywhere
Click to expand...

I can see codexers loving this game already.
Click to expand...

I really don't know why game devs (or other small companies) do this kind of thing.

I doubt, that someone would buy their game only because they want to support the underlying cause.
Instead they risk of pissing off some potential customers.

In the real world most people would consider donating to charity that strives to provide medical aid to those that can't afford it a good thing.

So did you buy the extra edition of this game?

See, with your rating you kind of proved my point.

Yes, most people would agree that giving free medical aid to those who needs it and can't afford it, is a good thing.
But what is highly debated - also in the real world - is, if the new vaccine really qualifys a such. I don't know either. Time will tell.

But please, no more discussions here about this specific topic. There are already enough other threads for this.
My point was more about the questionable marketing of donating money in general to charities - not this one in particular.


Regarding the game:
I played the demo. Atmosphere and graphics are really nice and the 'detective mechanics' are also intriguing.
I am thinking of buying this - if I hadn't so many other games lying around....

Neuromancer said:
I am thinking of buying this - if I hadn't so many other games lying around....

One upside for players like you and me: the game is short, about 5 hours. User reviews say it's still worth the price. I like short games if they are good.
Fight the decline, brush your teeth, upvote my Steam reviews. | ♬ khinsider game soundtracks ♬ | Zombra Streams Games Sometimes Twitch link | thread link | My latest musical release ca July 2019 | * Zombra's Completed Games *

Cyberpunk? Count me in, we need more of it.

[Steve gets a Kidney but I don't even get a tag.]
Thanks for the impression. I might get it along with strangeland. Will wait for mindscanner one.
!!!! BLACK LIVES MATTER !!!!

Finished it. Took around 5h. Seems to have some choice/consequence, I got a mostly happy ending.
Writing is good and mostly unobnoxious, excluding couple moments in the protag internal monologue. But hey, it's a noir convention.
The setting is pretty cool, the pixel graphics are nice, though the much higher resolution of particle effects chaffs occasionally.
The clue system, and actually having to piece together info you read (or at least take notes) is really cool. I wish it was taken even further, with some more complicated investigations to do.
Overall, a really nice game solid

mostly due to length and puzzles being bit to simple. Still, a good value for ~10GBP I paid for it.
Всичко добро си има край. ЛуканкаТА има два.

Let's Play: Qasir al-Wasat: A Night in Between - A stealth action-adventure in 12th century magical Syria [COMPLETED]
Let's Play: The Swapper - A side-scrolling, sci-fi, puzzle platformer made of clay [IN PROGRESS HA HA, No.]

I just got this and I would guess I'm 1/2 or 2/3rds of the way through, but I genuinely really like it so far. I like the setting, the atmosphere is nice. (Some of the worldbuilding elements are a bit Noun Salad for me, but I guess it's there because it's sufficiently 'alien' enough that you need, like, planet name stand-ins, etc.

I am only somewhat a retard and I still biffed on one of the Sheets because of the Noun Salad, but other than that, I like it a lot.

Finally got around to finishing it and I guess I got a mostly good ending as well. I liked it a lot, but wish like Yaar said above that the puzzles (sheets) were more complicated (instead of multiple choice, maybe you actually have to fill it in manually, like a parser) and I think the 'obvious' choices are probably what 90% of people will end up doing (I think you can really push legitimate damned-if-you-do/damned-if-you-don'ts into this style of game), but it was definitely worth my $18.49 and I'll likely try it again later and intentionally choose 'wrong' options to see where it ends up.

Finished the game. Loved it. Saw plenty of consequences for decisions and mistakes along the way. Some really fun, dramatic choices to make, as well as some very minor ones that still feel meaningful.

Will you accept a beer from an enemy?
Mainly, the story, music, atmosphere absolutely nail the richness and ambiguity of the best noir stories, without feeling stale or hackneyed. If you don't appreciate the genre this may not be for you. Otherwise, grab it.
Last edited: Jun 23, 2021
Fight the decline, brush your teeth, upvote my Steam reviews. | ♬ khinsider game soundtracks ♬ | Zombra Streams Games Sometimes Twitch link | thread link | My latest musical release ca July 2019 | * Zombra's Completed Games *

[Steve gets a Kidney but I don't even get a tag.]
that's a pretty glowing review dude. i'll get this as soon as I complete the bigger games I am doing (like solasta and nioh 2)
!!!! BLACK LIVES MATTER !!!!

Nice, I'll give this a shot.
A remarkable example of a pathetic species.

Just finished it. This game has balls

Best C&C implementation in an adventure game that I've seen in years. The game has real replay value.


I don't think I got the best ending but then, in the end, I did got whatever I wanted: I saved Laura, I exposed Gharia's corruption and the Liberators were gone.
I'm surprised to say this but Zombra found a gem. Good game. I will look forward to whatever this dev is working on. Why every games now want to be a souls-like??? Even a point & click adventure???? Most games aren't like that. I don't mind games using it as a specific gameplay mechanic to encourage replayability (as long as it's a good game).

I need to get round to playing this one..
A remarkable example of a pathetic species.

How "All progress since you last save point will be lost" give matter to your decisions?

Save+quit does not diminish from that, not having it is bad design.
Non-post apocalyptic Sci-Fi RPG thread
List of RPGs with base management mechanics
The definitive, authoritative, and probably non-exhaustive list of non-(IBM) PC cRPGs

How "All progress since you last save point will be lost" give matter to your decisions?
Click to expand...

To clarify, I am totally OK with only one save slot per playthrough. What I am not OK is the use of checkpoints in an adventure game. And I am not criticizing Lacuna in particular, that I just started to play.

I see this trend to remove manual saves and to use checkpoints everywhere, in every genre. In the case of Lacuna maybe it is not even a conscious decision by the developers, checkpoints are so ubiquitous now that maybe putting them even in an adventure game seems natural. But it is not.
You must log in or register to reply here.