From french mag Tilt - April 1992. Does anybody know if this game was ever released ? There's a debate going on in the dungeon crawler Facebook group with people trying to find out what happened to this game. I'll follow this thread, I really want to know more about this, thanks Neil!
Aeon of Sands - Aeon of Sands BLOG!

The Tilt article mentions a development by Westwood and a release date anticipated for summer 1992. We know this was never to come, so we speculated on the whys :
I remembered (although couldn't find the source, it was in a french magazine) an interview of one of Westwood executives at the time of the release of Lands of Lore saying that Lands of Lore was originaly a very different game that they reworked to be closer to Eye of the Beholder because of engine problems. Alegedly, they kept the story and most of the gameplay elements but had to completely redo the engine and graphics.
At this point, a good bet was that Legacy of the Necromancer may have been that "very different game".
A second thought was context-based : 1992 was the year Westwood cut its D&D ties with SSI and was bought by Virgin Interactive. Another possibility was thus that Legacy of the Necromancer may have been a game discarded by the budget cuts made the Virgin buy/SSiI session. It may also have explained the Lands of Lore rework : maybe they didn't have the money to fix the incomplete engine and had to resort to one they already have.
Knowing that the original dispute between SSI and Westwood was about the third Eye of the Beholder and they wanted to make a dungeon crawler that was less limited by the D&D ruleset and that they wanted to make Lands of Lore a series of eight games (which were never to be, because EA...), that was a very legitimate possibility.

Then Joseph B. Hewitt entered the discussion with real insight : he was Senior Artist and Designer at Westwood.
To quote Joseph himself :

This game was not from Westwood. I've never seen or heard of it before. SSI took over Eye of the Beholder franchise when we were bought and merged into Virgin Games, though we did help them with EoB III. We went ahead with Lands of Lore. I don't remember there being another vision for it, though I do remember that we we conerned about the real 3D games that were starting to come out, notably Ultima Underworld, which is why we added the fake turning illusion at the last minute.
Click to expand...

From reports on abandonware-france.com, we found that Legacy of the Necromancer was presented at both CES conventions in 1992 (Summer in Chicago and Winter in Las Vegas), both times at the Virgin stand. So it *was* a Virgin edited game. What we can't find, however, is if the game was developped in-house or not, and by who exactly.
At that point, the best guess as far as the Tilt article was concerned was to assume that Tilt simply thought all Virgin RPGs on the stand were from Westwood, and made the wrong call.
Whatever the reason, the game was indeed in the 1992 Virgin catalog.

The other magazines mentioned as sources on the abandonware-france pages weren't much help, only confirming what we already knew : Legacy of the Necromancer is a Virgin game, it was presented in a playable state, but somehow vanished.
Back to the "budget" idea, one possiblity is that the game was developed internally by Virgin, and dropped when the company got the deal with Westwood. The dates may work, giving Legacy of the Necromancer was suposedly late by summer 1992 (it appears to have been shown in a still-beta form in Las Vegas, at a time it was supposed to have already been released if we are to believe the Tilt article) and that Lands of Lore was released in January 1993. But if it is so, there's still a big blank on the "why", especially considering that there was another RPG edited by Virgin around that time (Warriors of Legend, a late-1993 release that was presented alongside Legacy of the Necromancer in Las Vegas).

By the way judging by the covers I had some Tilts from that period but I don't think I had this one.

That paperdoll style immediately reminds me of Dreamforge / Event Horizon games...
The expanded edition of The CRPG Book is out, grab it HERE!
フエフエ 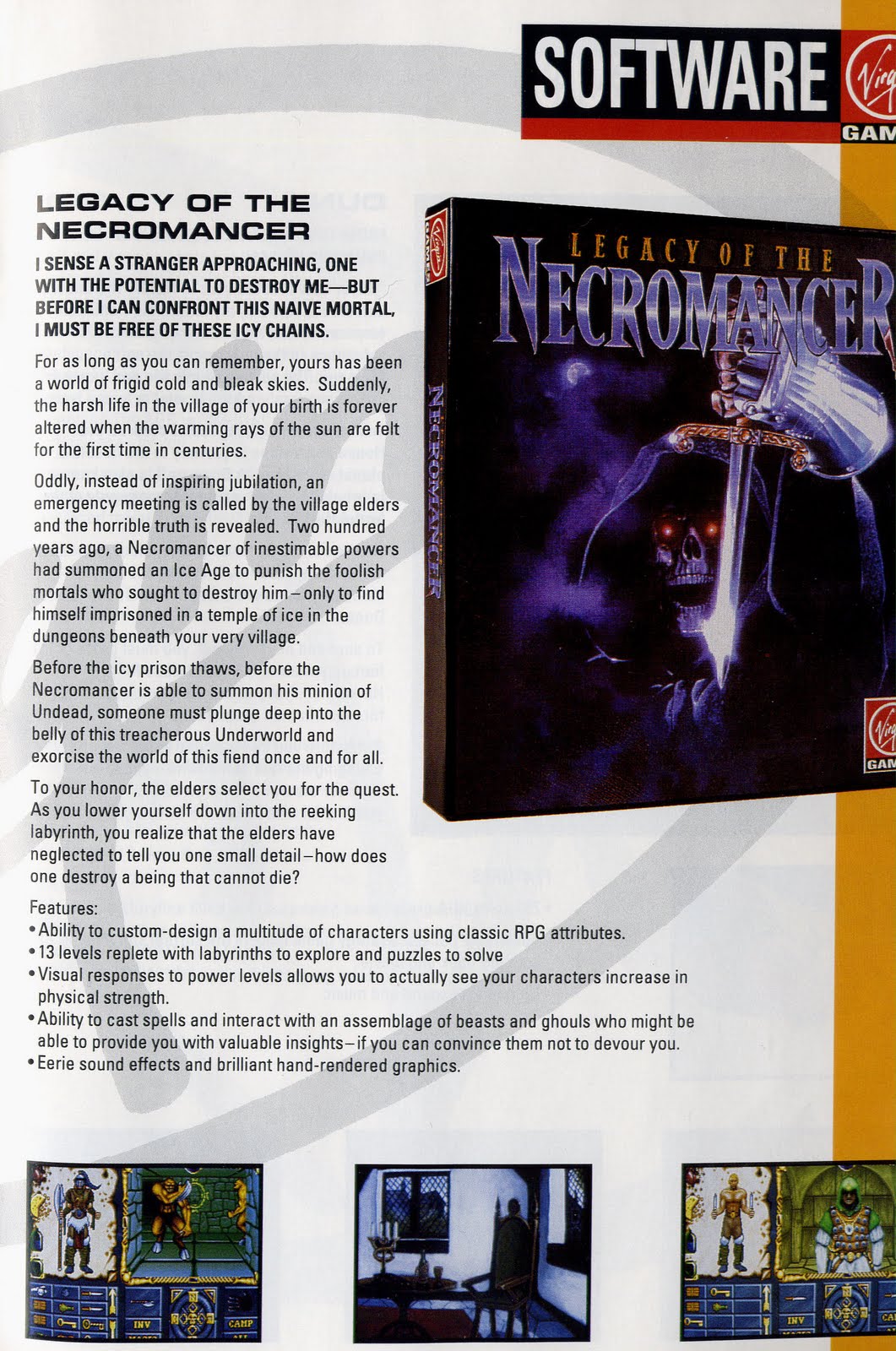 A game nobody knows on RPGCodex? Awesome!

Still searching, by the way. Looking for old magazines with reports on both CES (it's amazing what you can find on the internet

). Haven't found anything new yet.

My guess is that it was a Virgin published game that got cut when Westwood came over, it's likely lost forever since source/asset control is generally terrible across the entire software industry, but especially in games. Reminds me a bit of Anvil of Dawn for some reason. The best hope to find out more info on the game is to pester the guys who were actually around at the time, it definitely had more work put into it than most cut games/content/concepts you hear about. I'd hit up whoever worked at Virgin at the time you can first and then try the waters with some of the other developers doing dungeon crawlers at the time if needed.

you can get those magazines with better scanes there: http://www.abandonware-magazines.org/affiche_mag.php?mag=28
This game looks like exactly dungeon hack.Thats odd i never remember it being released either. Thats not the first a rpg has its name changed.

Going to read next issues to see if the game was reviewed, they said available this summer.So summer 92-93....

It was never released and there's nothing about it in any other Tilt issue (or any other french magazine after the CES of Summer 1992), ever. I've already checked.
Last edited: Mar 30, 2017

I browsed them all till summer 93 , each month has a RPG released if not more. That makes me remember why i was so excited in gaming back then. But legacy of the necromancer ?There's no review.... Oh anyone remember this ? 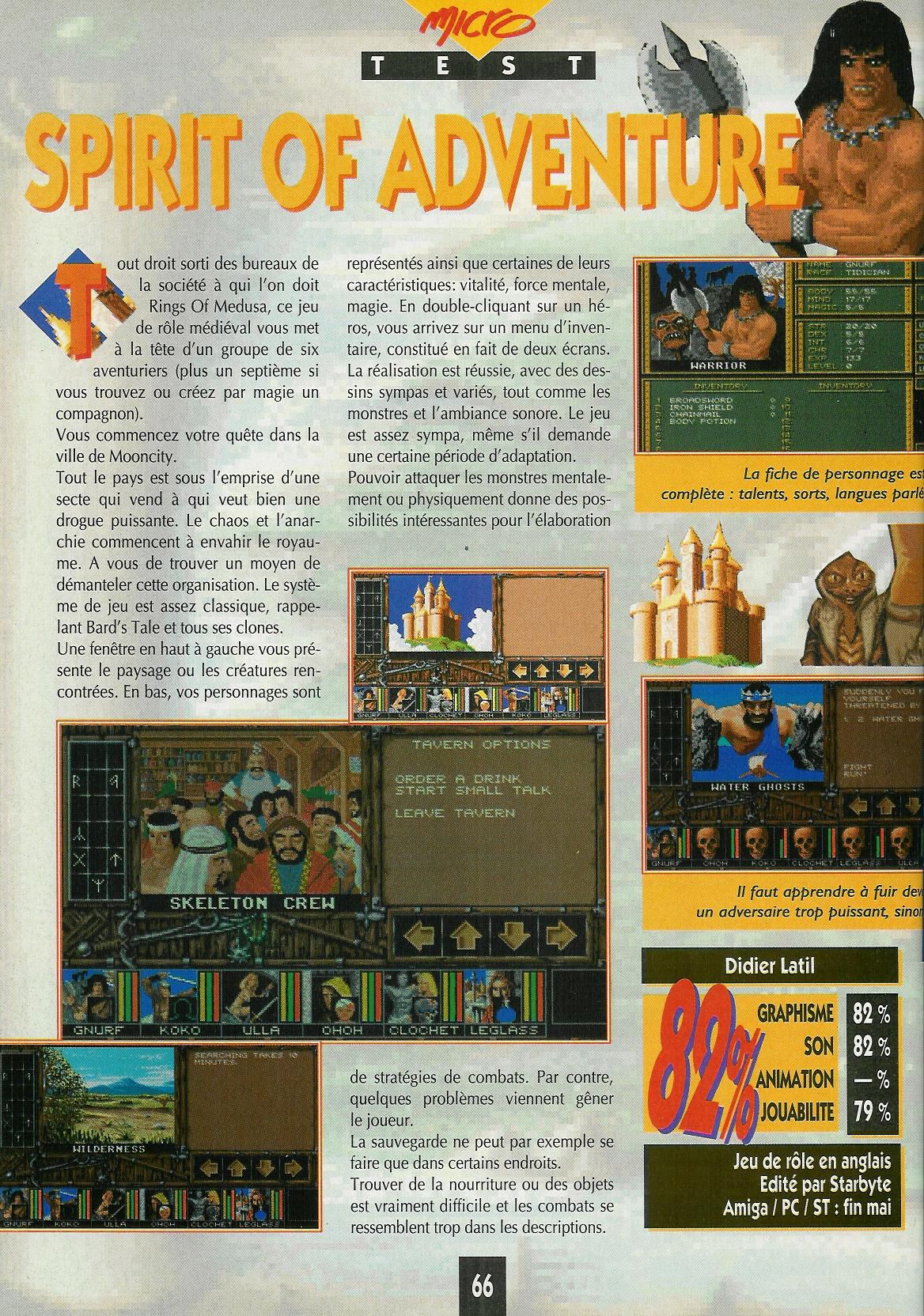 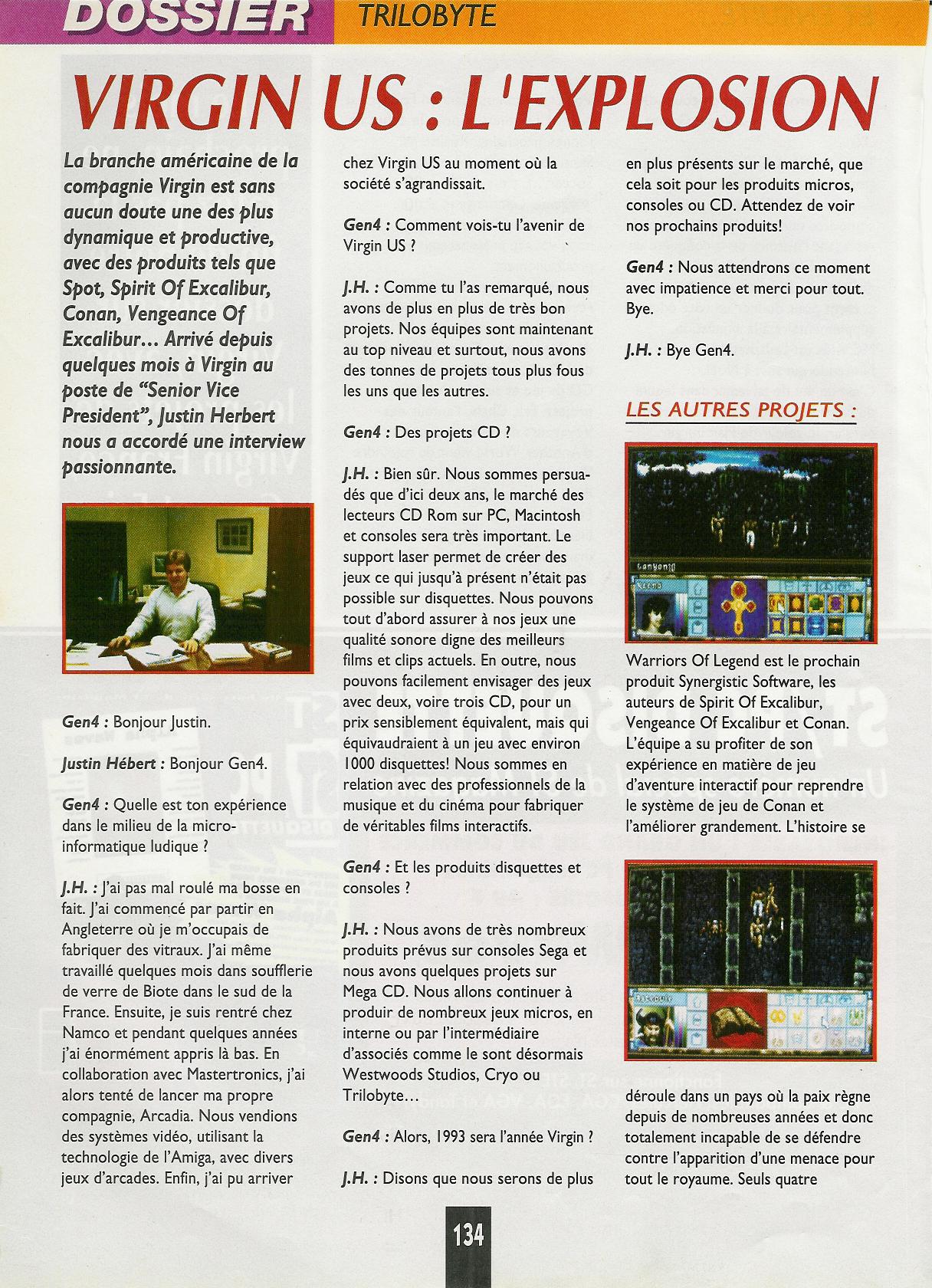 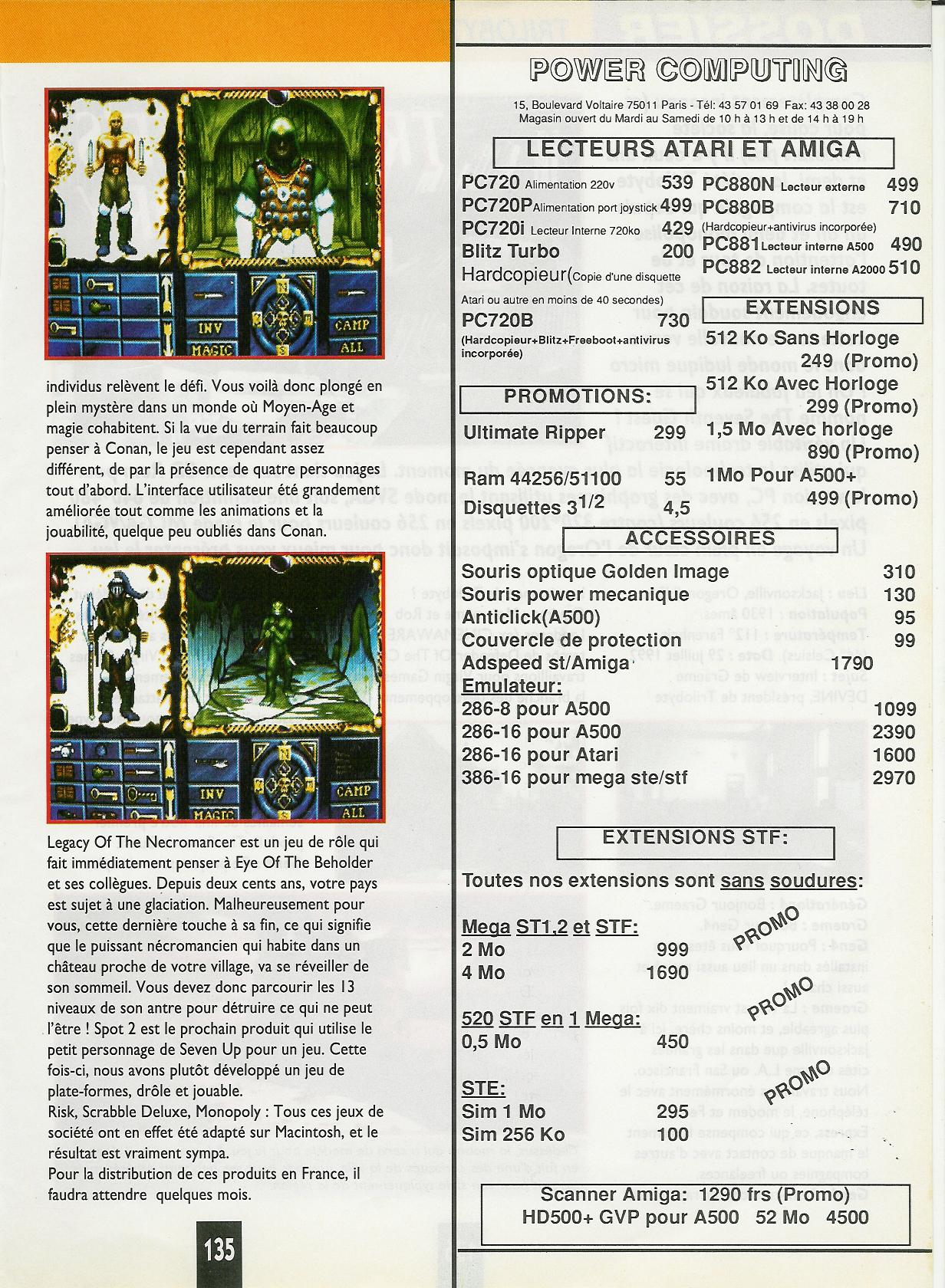 So it says available in a few months.. But there's nothing on next few issues either.

Any way of knowing if it was showed on the ECTS '92 (April/September)?
all people must be loved and respected

Except mailing the people who worked on this at virgin i dont think you can find more info. There's nothing anwyhere about it.

Mortmal said:
Oh anyone remember this ?


yeah, that is from the Realms of Arkania makers, uses the same engine, not very good from what I could remember

Mortmal said:
Oh anyone remember this ?


yeah, that is from the Realms of Arkania makers, uses the same engine, not very good from what I could remember
Click to expand...

It's kinda like open-world Bard's Tale. Has some cool ideas, paricularly in the magic department, but an absolutely retarded plot and the same annoying cities as in BoD, where you had to manually check each of a shitton of identically looking houses for special encounters - only without an automap.
I have no internet and I must shitpost.

Well, it was prob dropped since a game like that would have been known by everybody back then if it had hit the shelves.

With the Grace of God, Honored King of The Svears, the Goths and Vends, Grand Duke of Finland, Duke of Scania, Estonia, Livonia, Karelia, Bremen, Verden, Stettin, Pomerania, Kassuben and Venden, Duke of Rügen, High Lord of Ingria and Wismar, Pfalz Count of the Rhine, in Bavaria, and the Jülich, Cleves and Duke of Berg. Lord Protector of Valdens, Spanheim, Mark and Ravensburg and Lord of Ravenstein.
You must log in or register to reply here.