Location
Under the Gods

I am honestly impressed at how they keep adding shit for free for a long time now.

Even more impressed that there are still people playing this game, because every update just makes it a bigger piece of shit.

new sentinels! with new weapons! new behaviours!
and it's all pointless because the only time you actually fight sentinels is when you peekaboo them from inside a building. and you're doing it just to waste time and to hurt yourself because it's totally useless and gives you nothing of value.
you can polish this all you want, still a turd, forever.

DDZ said:
I am honestly impressed at how they keep adding shit for free for a long time now.

Even more impressed that there are still people playing this game, because every update just makes it a bigger piece of shit.
Click to expand...


They do get some sales from parading these updates around and it is building goodwill with the mentally disabled. Hello Games is a small studio and if they land ~10k new sales with every update, it is probably keeping the lights on. Probably the only real direct income source for them since their 2020 game didn't do that well.

Some old rumors from GameFAQs of all places:

I know during 2013 Hello Games, No Man Sky's developer, had an incident where their HQ was flooded, destroying most of the equipment they used to make the game, and stalling development progress. During this time it was rumored that both Microsoft and Sony bid hard to get No Man's Sky on their respective platforms, with Sony obviously coming out on top.
Click to expand...

Hello Games pitched the infamous first trailer around a few days before VGX 2013. Sony was interested and decided to have it play there. The relationship began from there.
Click to expand...


They might have a pretty sweet deal if it actually was a bidding war between publishers. Many of the updates were probably (and might still be) directly bankrolled by Sony.
https://www.sharesubscriptions.net/

They give OUTLAW update , including new starships, smuggling, underworld etc.

We’re delighted to let you know our next update is called OUTLAWS and it launches today. This is a particularly explosive update with the focus on the underworld of No Man’s Sky for the first time. We have overhauled Space Combat, introduced a new pirate underworld and added solar sail ships (the first new ship class in the game in over 2 years - since our LIVING SHIP update). You can also now hire your own squadron of wingmen, smuggle illegal goods, and protect your settlement from pirate ship raids.

Our last update (SENTINEL) focused on ground combat, broadening the risk, reward and fun for players exploring on planet. Similarly we were really delighted to put some love into Space Combat with this latest update (OUTLAWS) and I know this is one the community has been really eager for.

Please check the patch notes here for full details, but these are just a few of the additions which OUTLAWS brings:

Outlaw Stations
Outlaws have taken over space stations all across the galaxy. Outlaw systems are dangerous, lawless places, with frequent conflict (but this all represents an opportunity for players with an eye for raiding passing starships…)

A new series of missions leads players towards pockets of rebellion, where they’ll find an underworld offering pirate missions, black-market technology, and a chance to acquire valuable goods illegal elsewhere in the galaxy. Like-minded players can even acquire a forged passport that will allow them by-pass the authorities. 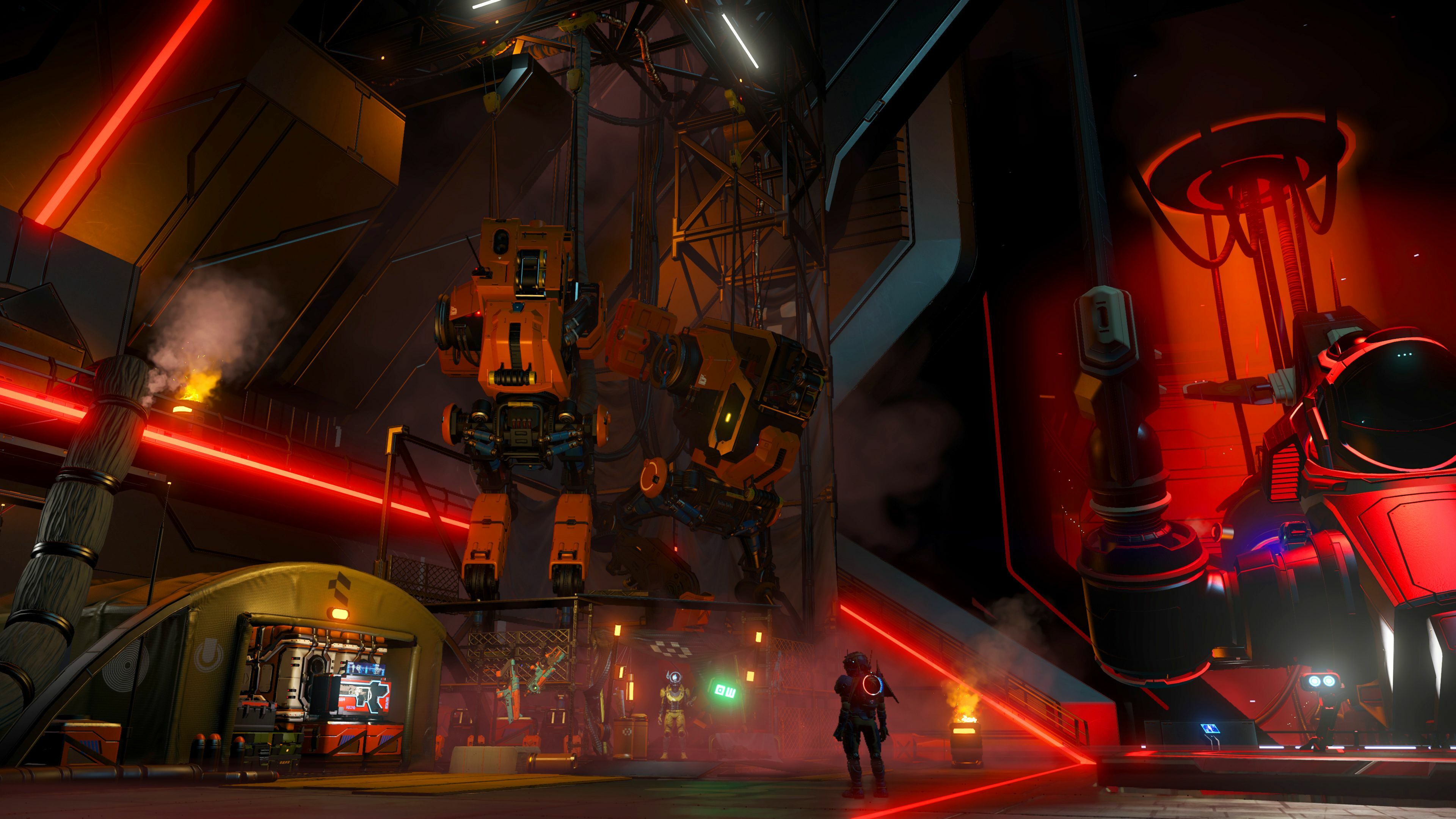 Solar Starship
With unique solar-powered sail and sleek bodywork, this is the vessel of choice for those looking to speed between the stars. The Solar Ship is No Man’s Sky’s first new starship since the start of 2020. There is considerable variety across this range of ships, so look forward to scouring the galaxy for the perfect version to match your existing fleet. The maximum number of ships a player can own has been raised from six to nine, so you don’t have to worry about limiting your fleet either. 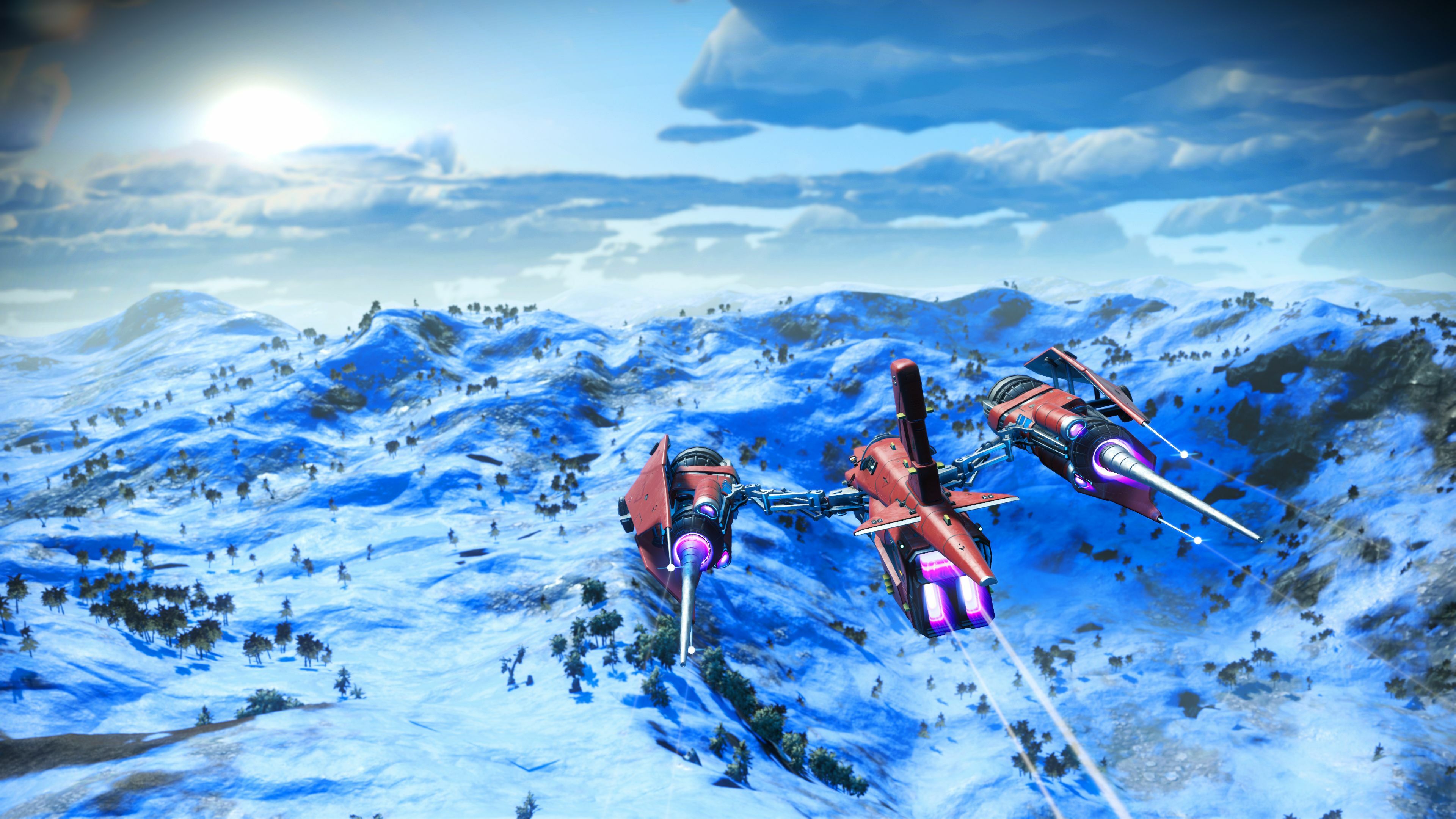 Smuggling
Illegal goods can be purchased in outlaw systems and be smuggled out for a significant profit. A smuggler’s life is dangerous. The Sentinels are on the lookout for contraband, and discovery is only a cargo probe away…

Cargo Inventories
All players - not just the smugglers - will benefit from the addition of specialist cargo inventories to all starships. These high-capacity slots can store large quantities of cargo, and storage-hungry players can unlock extra slots from the ship upgrade terminal found on all space stations. 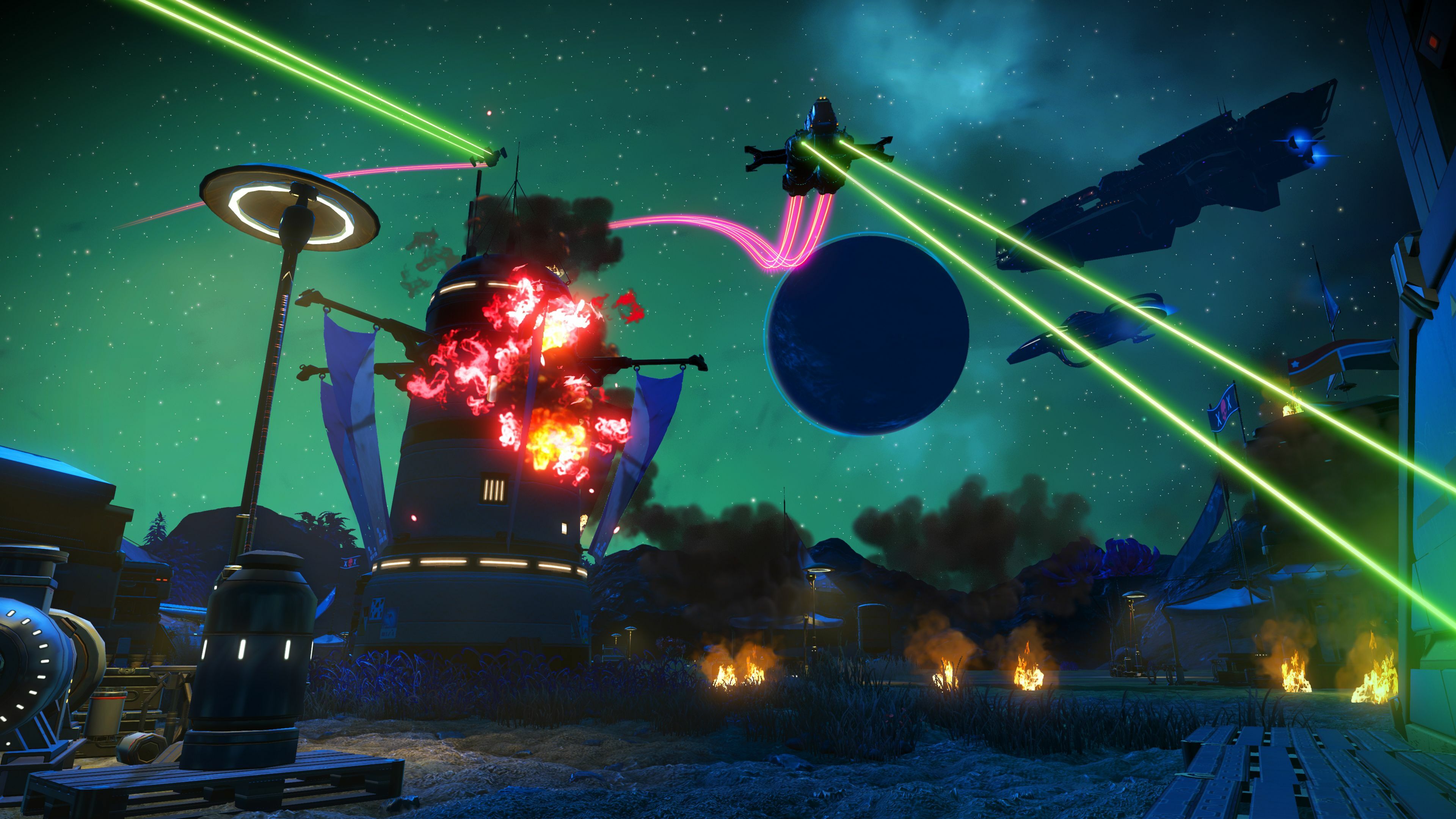 Squadrons
Players can now recruit and upgrade their own wingmen. Collect your perfect set of ships and pilots. Each pilot comes with their own abilities, and can be upgraded over time to improve the combat ability.

Space Combat
Space combat has been overhauled for speed and excitement. Handling has been improved, weapons have new visual effects and enemy starships now have shields. Depth has also been added to weapon selection with a variety of specialist secondary effects, such as slowing enemy engines or disabling shield systems. Ship-to-ship combat can now occur within a planet’s atmosphere too - and pirates may raid your settlements. For those who find Space Combat difficult, flight accessibility has been significantly improved with a new Auto-Follow mode. 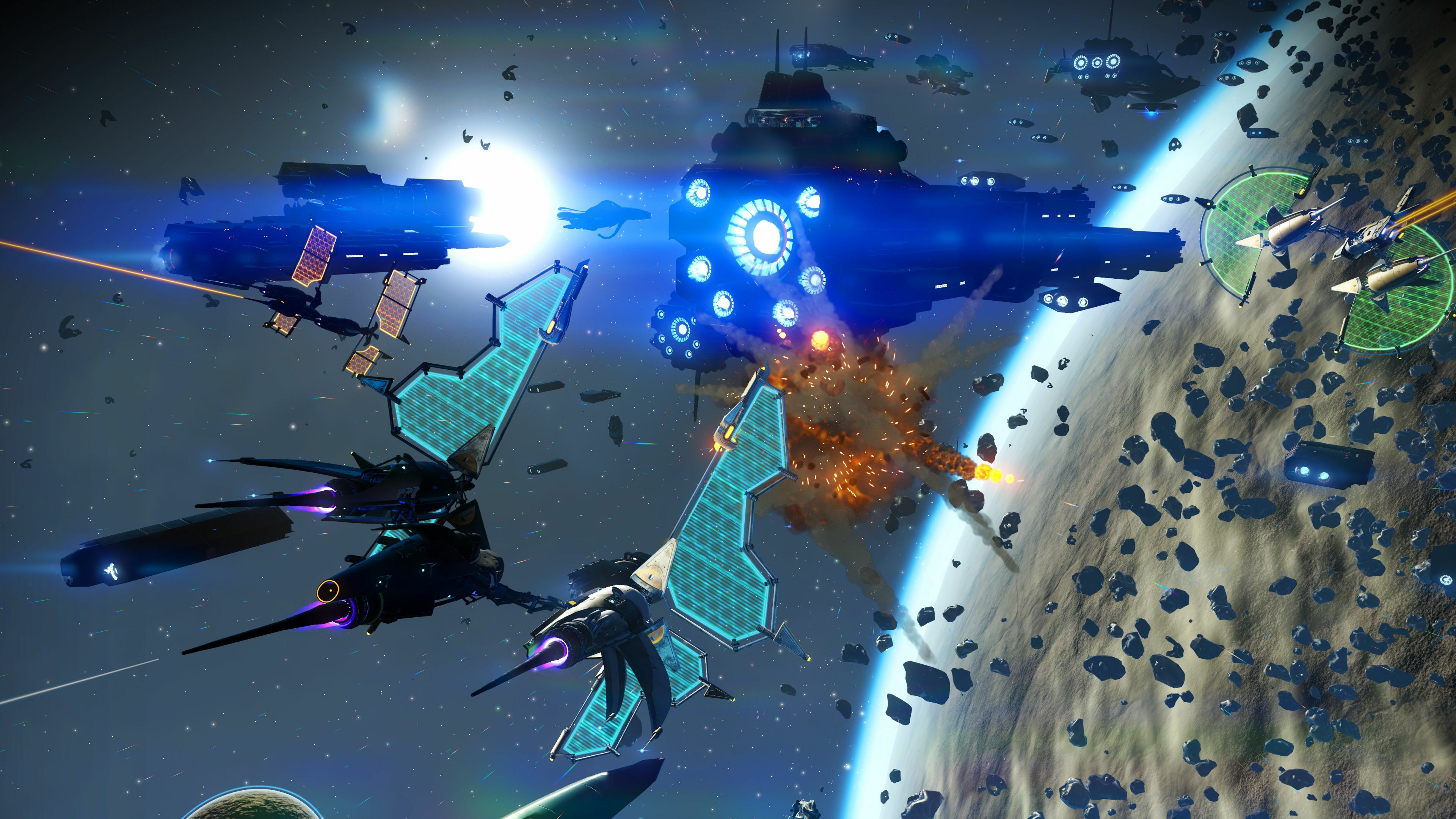 It’s so surprising for us, after six years to see No Man’s Sky still resonating with folks. It meant so much to the team to see our last update (SENTINEL) bring in so many new players and exceed expectations, and following that it blew our minds to win the “Evolving Game” category at the BAFTAs last week. All this and our Switch version is shaping up nicely in the background!

Steam really needs to do a 'polishing a turd' award next time they have voting for games, this thing would win by a mile.

Did they ever make an update that adds varation to the planets? E.g., a planet that has a desert in one region, a forest in another, etc. rather than the same biome spread evenly across the entire surface. The problem with exploration on planets (apart from them all being samey) was that there was no point going anywhere because you knew that the rest of the planet would look generally the same as your landing spot.

There was also the problem of every planet being dotted with little settlements, wrecks, lost tech etc. that killed any sense of being an explorer, because every planet had already been discovered by NPCs and mapped out. It feels really stupid to "name your discovery" when there's a space station in orbit and a spaceport with people coming and going frequently.
What makes a good man turn neutral? Lust for gold? Power?
Or were you just born with a heart full of neutrality?

Who gives a shit.


That is exactly it. Con Murray keeps plastering some weak attempts at gameplay and depth over the barebones hideous corroded skeleton of the game he lied about in 2016, year after year, and it's always the same ugly, buggy, Quake 2 textures piece of shit it has always been, but there's just more shit in it.


That is exactly it. Con Murray keeps plastering some weak attempts at gameplay and depth over the barebones hideous corroded skeleton of the game he lied about in 2016, year after year, and it's always the same ugly, buggy, Quake 2 textures piece of shit it has always been, but there's just more shit in it.
Click to expand...


Agree 100%. Also I see it still has the same shit clouds that it had the first time I played it for example. Empty worlds with nothing on them. No cities nothing. Planets that are stationary. Boring cut and paste alien trading bases.

This is the rando universe one right?

KeighnMcDeath said:
This is the rando universe one right?
Click to expand...

I do wonder what kind of scam they have going in the background that they have the money to STILL be working on the same game, trying to wring blood from a stone.
Move. The Fuck. On.
Or better yet: Don't and get a real job.

dude, they're property of sony, whom they scammed too. they're going to be buttfucked to hell and back if they dare to stop.

This just an update adding shit. I'll look at vids. I take it ALL OLD ISSUES were not fixed and suggestions ignored?

is this an online game? Offline? Campaign ends? Eh wth?

Last edited: May 26, 2022
"Enough polite conversation. Enough white comfort." - Bad Robot / J.J Abrams
"Having a plan I have learned -- in some cases the hard way -- is the most critical thing" - J.J Abrams
Evil can not create, only corrupt. Fuck Hollywood!

Don't remember if I chimed into this thread already, but I started playing this a few months ago on GamePass. I admit it was intriguing and fun for the first few days, doing my own thing, trying to figure things out, but eventually I was wishing for a campaign to lead me in a concrete direction, what to do and why. Well, I found the "campaign." And it makes the game 100x worse than when I didn't know what was going on. It becomes the most disgusting busywork, errand-boy simulator I've ever seen. And they did a bunch of things they seen other games do, but did them all worse. Exploration and building not as good as Minecraft; exploration, technology acquisition, and story progression not as good as Subnautica, space sim not as good as any halfway decent space sim, survival elements not as good as...pretty much any survival game I can think of. What a mess.
Last edited: May 26, 2022

this game sounds great, wishlisted
No, I do not have a faeces or anus fetish


Yeah, there's a lot of hype behind it. I really hope it lives up to the hype when it gets released.

There were times early on where it felt like a new Starflight. They should have taken the whole game in that direction, had like a 20 hour campaign. There are some nice visuals. But all the endless universe shit and countless generic NPCs are just pointless. What a waste, it's fucking aggravating how incompetent they are.

Fedora Master said:
I do wonder what kind of scam they have going in the background that they have the money to STILL be working on the same game
Click to expand...


???
They've been on Steam's top 10 best selling games, every month for the past 2 years
With every new update they increase their sales significantly and their player count since Internet Historian's video has become quite stable (not to mention their reputation restored)
Last edited: May 29, 2022

Fedora Master said:
I do wonder what kind of scam they have going in the background that they have the money to STILL be working on the same game
Click to expand...


???
They've been on Steam's top 10 best selling games, every month for the past 2 years
With every new update they increase their sales significantly and their player count since Internet Historian's video has become quite stable (not to mention their reputation restored)
Click to expand...


People are easy to please. No wonder the industry is going to shit.
You must log in or register to reply here.