Incline Nu Codex rocks! The "I Love It" Thread with definitive poll

Really swish and easy to navigate.

Like the new categories; took me a while to get my head around a few things but, being the MAN i am and not a whiny BITCH, i was able to work it out and appreciate the work gone into making this happen.

This will be a day long remembered...
No, I do not have a faeces or anus fetish

I think its awful. Cramped format, less character. Bland, depressing.
Governments may think and say as they like, but force cannot be eliminated, and it is the only real and unanswerable power. We are told that the pen is mightier than the sword, but I know which of these weapons I would choose. - Sir Adrian Paul Ghislain Carton de Wiart

I CAN'T RATE, NIGGA!
I CAN'T RAAATE!!!
This last specimen of a now extinct culture of romantic dreamers merits punishment beyond death. 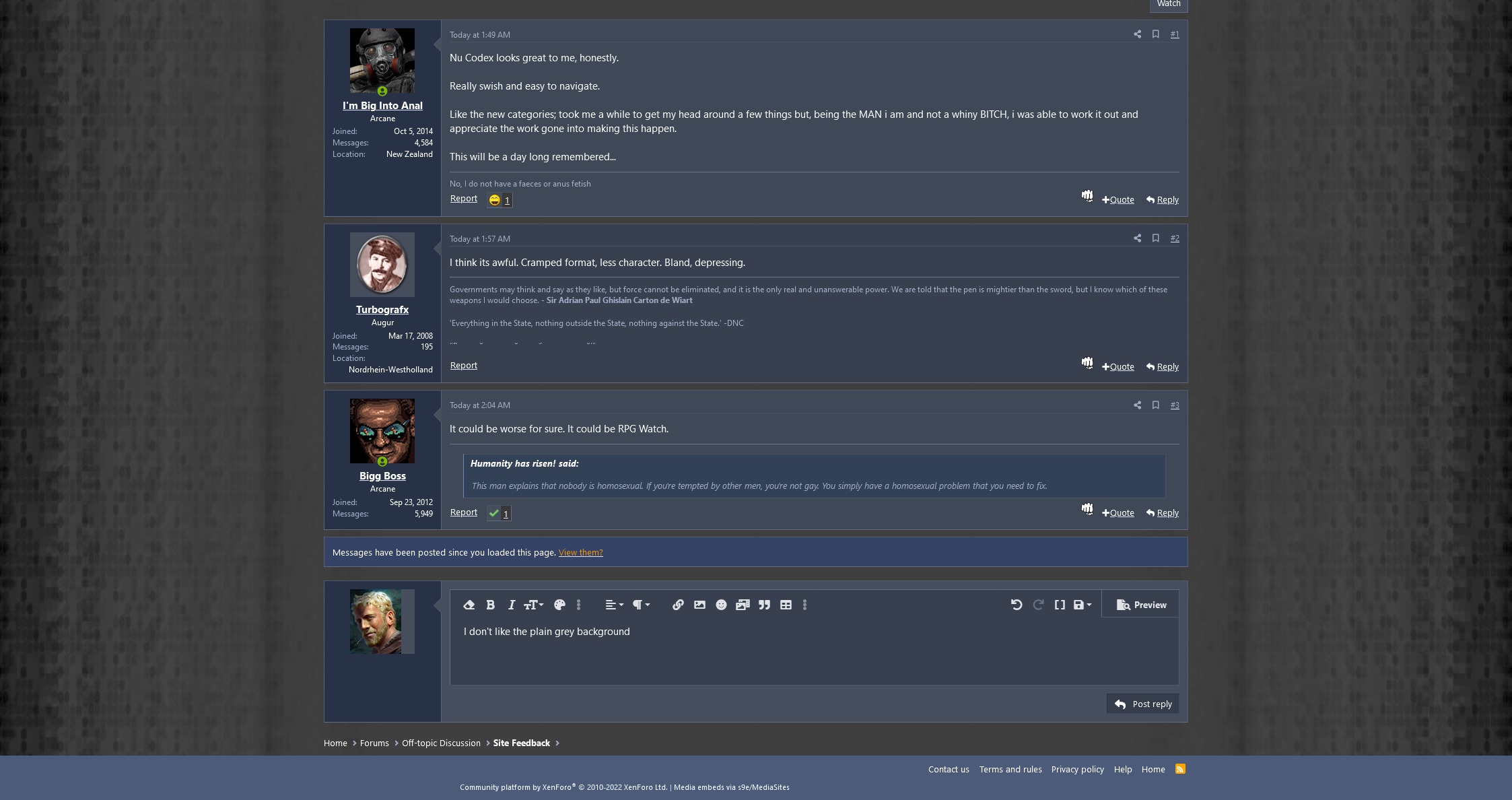 idk, just put something there

otherwise, my complaints were addressed prior to launch
Non-post apocalyptic Sci-Fi RPG thread
List of RPGs with base management mechanics
The definitive, authoritative, and probably non-exhaustive list of non-(IBM) PC cRPGs

the nu'dex is horrible, it needs weeks of work, not being released at this stage
Prestigious quickie review series: Pathologic, Prelude to Darkness, The Void (Tension/Turgor), Cargo! - The Quest for Gravity, The Outer Worlds, Risen series

I get they needed to update the framework for security reasons, but we really should get the old style back.

Forged when the world was young, and bird and beast and flower were one with man, and death was but a dream.......

It is not triggering me as much as other people here but it is half-baked at best and lots of features are still missing. Not sure why DU flipped the switch as soon as he did

ChaDargo said:
Hey, man. I just wanted to wish you a Merry Christmas. I'm sorry I assfucked you so much (although we both know you loved it). Good luck to you!
Click to expand...

Having lived through 3 of these upgrades on different sites I am desensitized to the changes. Complaints are typical, and most of them will be worked out in due time, while the rest can be fixed with Stylus. The majority of the users get used to the changes, and new features more than make up for it. I'd love to see a threadmarking addon implemented for LPs. 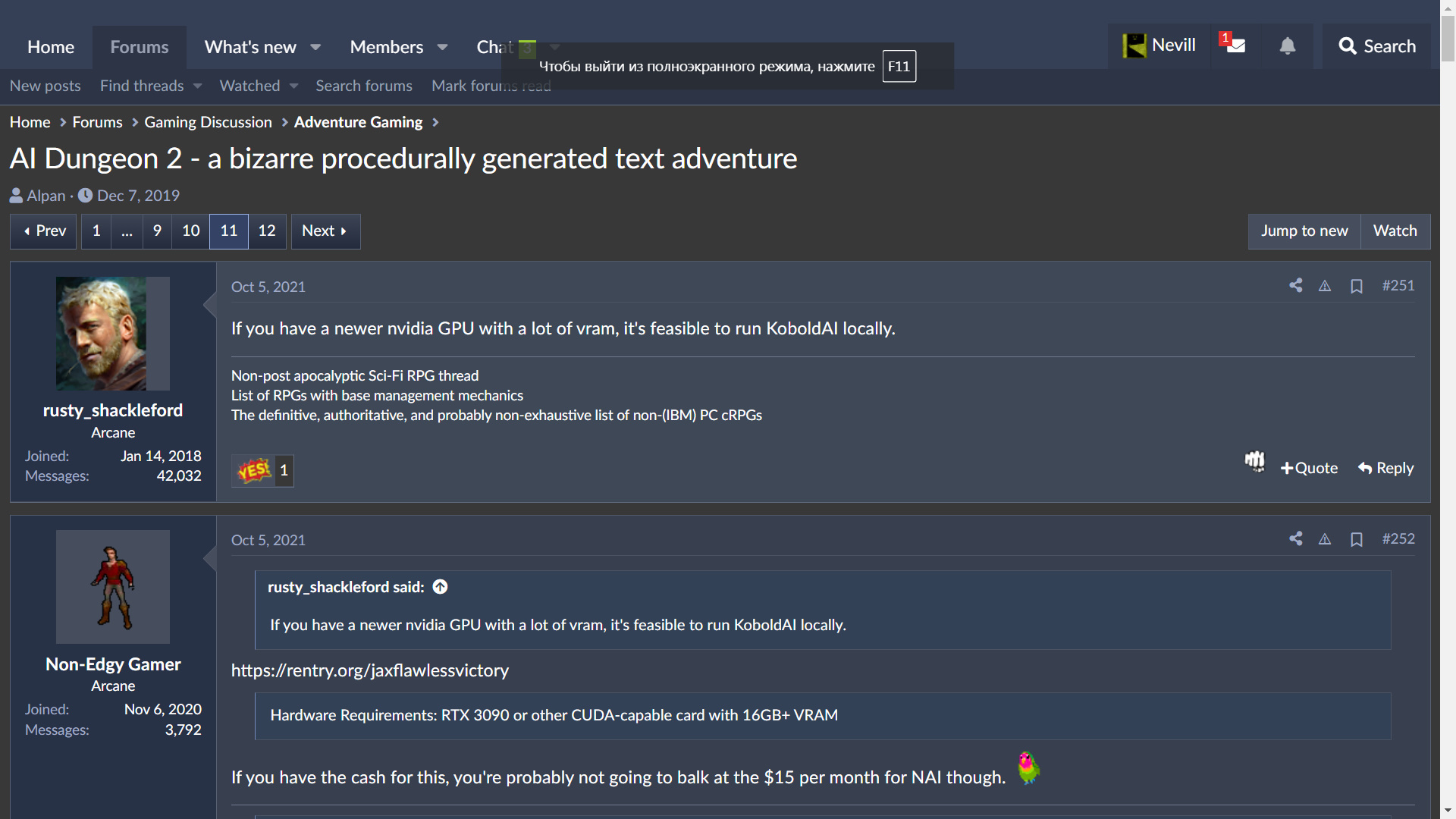 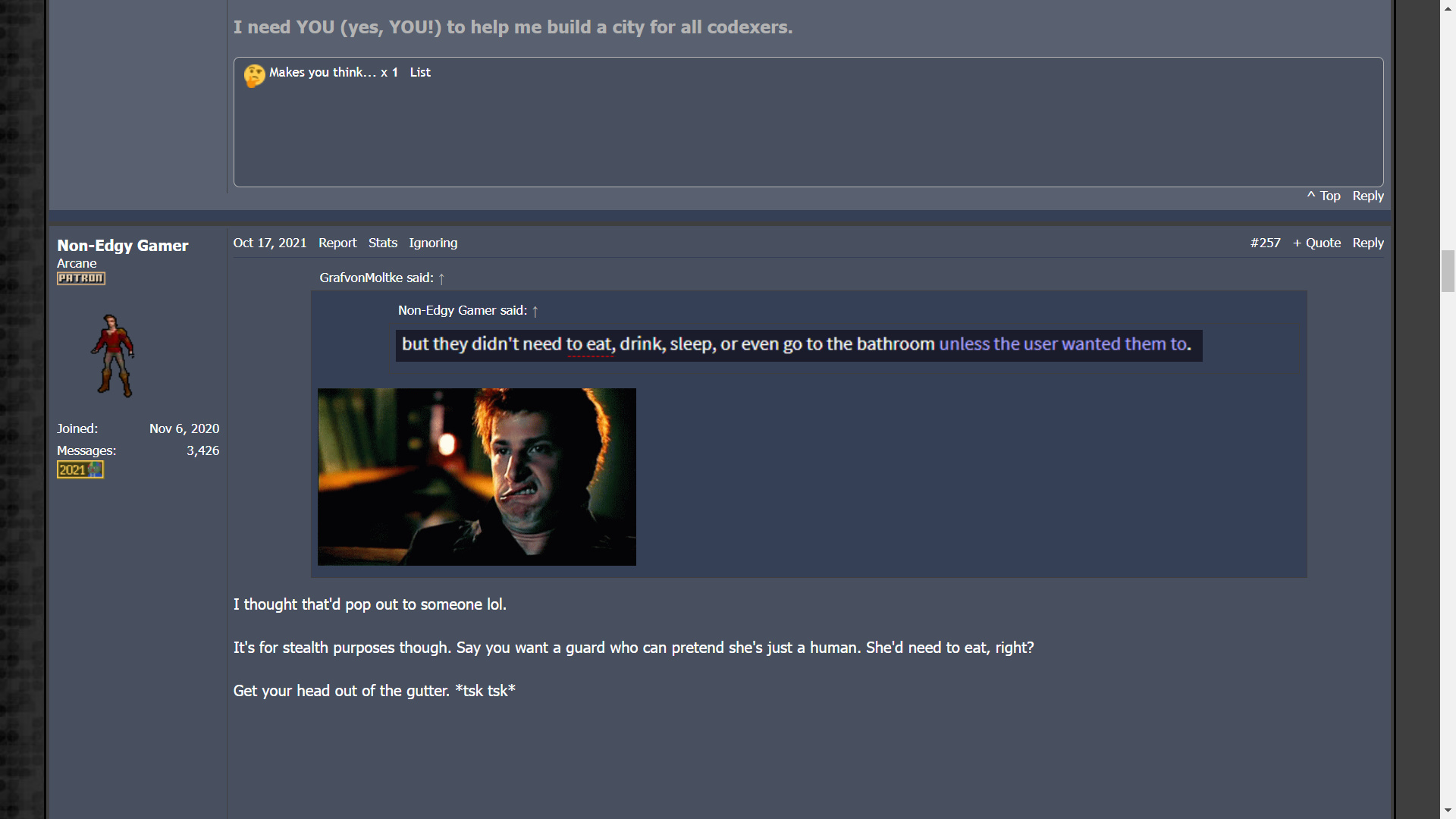 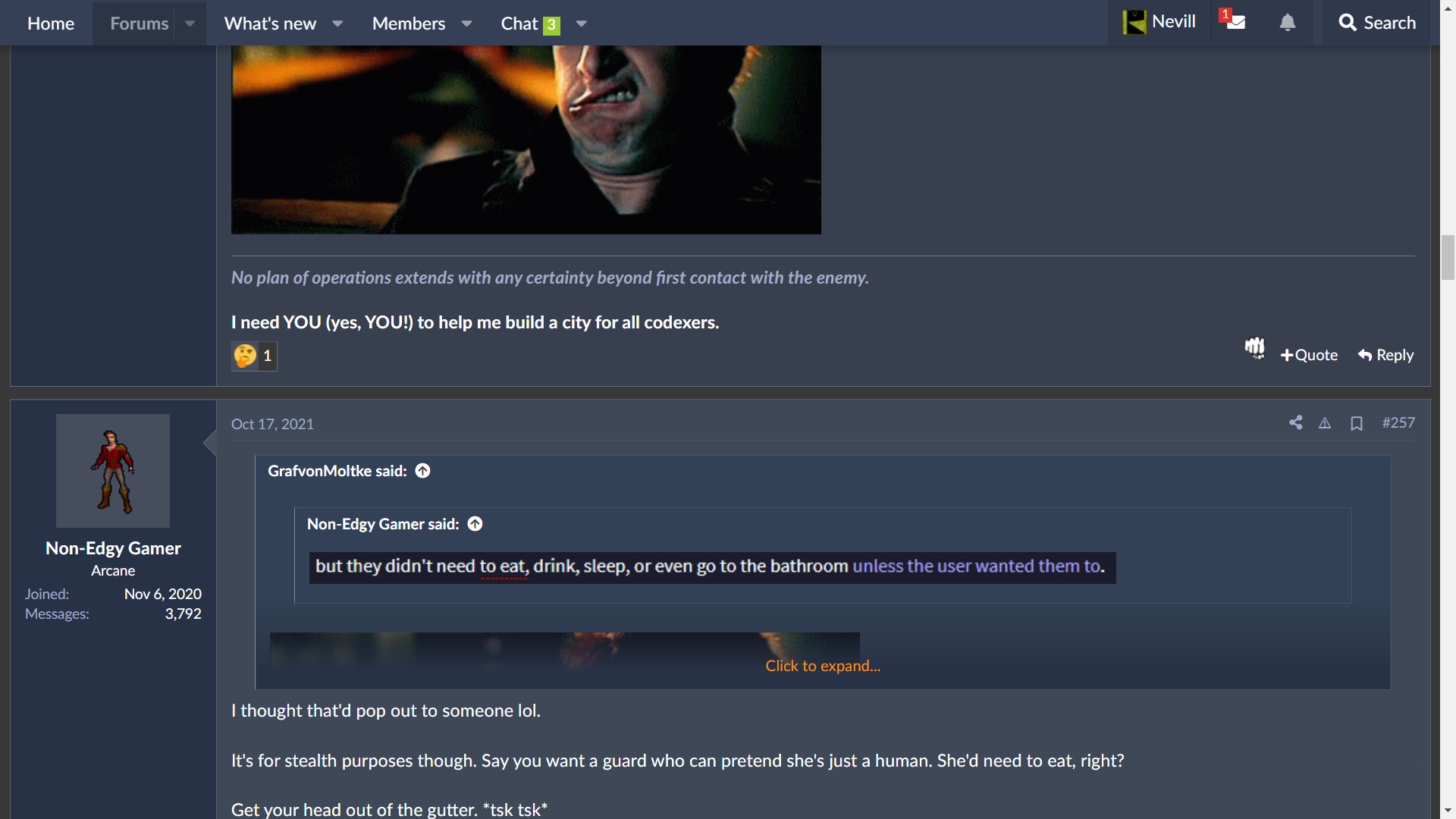 I can see some concerns -- like the color difference between the post and the avatar, and the posts feeling disjointed because of the grey background between them -- have already been addressed.

I like the compact design (it's a bit too compact -- some of the old signatures no longer fit), and I like that the buttons no longer take a third of each post. You can't believe how many times I gave accidental ratings.

New quotes seem a bit too wide in comparison, but then that might just be me.

The background needs to come back. A better defined border between the post area and the background wouldn't be amiss (that black outline on the old screenshots). Borders really make a difference in perception. 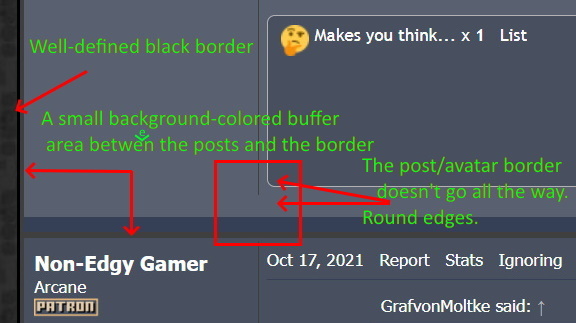 Could probably replace the small buffer area with dark blue to get back that blue feel of the old site.

Also, unifying all the thread buttons (page navigation, Watch/Jump to New) into a single bar could help combat the disjointed feel and make it look more cohesive.

Oh, and the width of the posting area needs to adjust to the screen size, but I am sure that has been talked about in the neighbouring thread for 5 pages -- that one is really hard to miss.

The forums page (the one with the list of threads) could use some love (some more personality), starting with the icons. It's probably not too complex to get it to look like the old one?

Edit: the rating icons are a bit 'meh'. The counter shouldn't have a gray color, and perhaps the background could be transparent? I'll wait to see what the site looks in a week and then make a css script to fix that if it isn't.
Xenforo 2.0 has a functionality where clicking on a rating opens a list of people who gave you that rating. Can we have a button to view all ratings and who gave then all at once?
Last edited: Jun 14, 2022

Konjad said:
the nu'dex is horrible, it needs weeks of work, not being released at this stage
Click to expand...

Bigg Boss said:
It could be worse for sure. It could be RPG Watch.
Click to expand... 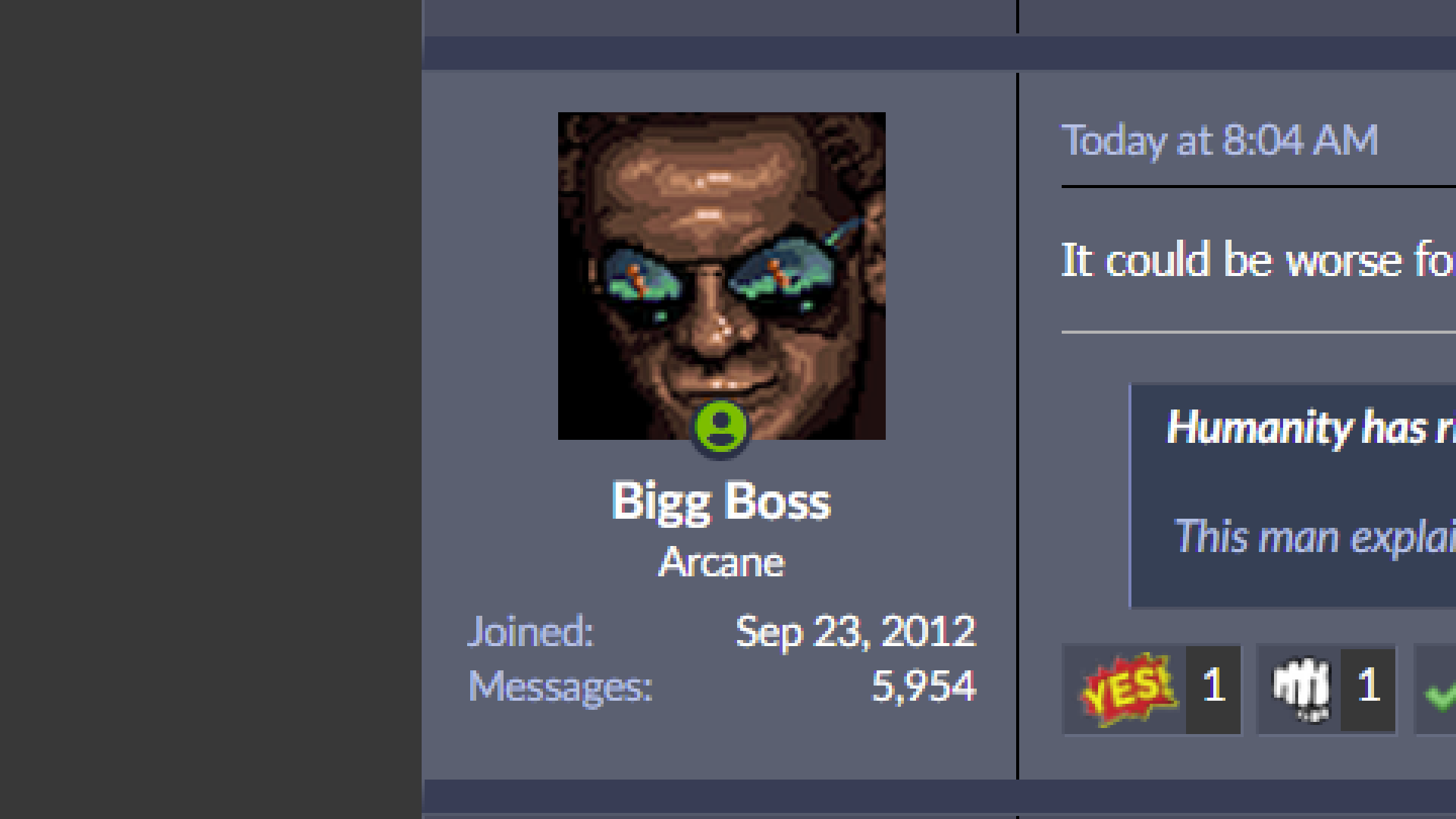 The Codex design is still better than Retardera’s, so there’s still room for getting worse.

I think it’s fine. I’m confident they’ll fix everything given enough time, just have to patiently wait for the growing pain to subside. There’s even more buttons of mine coming so that’s something you can all look forward to.

Nudex is horrendous.
Cleveland Mark Blakemore:
Crispy, I think of you as a gay man with soft features in a velvet purple bathroom slowly taking drags on a long stemmed cigarette in his boudoir style gayness, Crispy - a tasteful gayness that wins him fans because everything he does is tinged with delicate gayness

My only complain would be the font is heavy on the eyes now - they starting to burn pretty quick. I was able to sit whole day on the old dex. I'm not sure what is happening in here.

I have not found the way to inspect or change my avatar—should I wish.

Glop_dweller said:
I have not found the way to inspect or change my avatar—should I wish.
Click to expand...


It's not implemented yet, they work on it

Camel said:
The Codex design is still better than Retardera’s, so there’s still room for getting worse.
Click to expand...

All I can see of your sig is a forehead tho.

Bigg Boss said:
All I can see of your sig is a forehead tho.
Click to expand...

Blame a site administration. Also that's a great forehead though.

This section of this particular song best describes my feeling towards nu-Codex.
Nothing aggravates a delicate situation much more than a massive detonation.

I'm too old now, the magic inside me is dead like a stillborn child.
You must log in or register to reply here.