I hope they'll have a communication/reporting system like SWAT 3, that shit was fantastic.
-Nova
Level Designer @ Campfire Cabal

Looks very SWAT 4 with a couple of new tricks. Excellent.


You are able to watch the 8 minutes long gameplay trailer here: https://www.reddit.com/r/ReadyOrNotGame/comments/aykaes/the_full_trailer_downloaded/

Looks kinda... rough. I like what I see, but it's clearly an indie game from a small team (and the Q4 2020 release window was probably a smart decision).

What worries me the most, and what will make or break this game is the AI. (For the SP crowd, anyways.)

itching to reinstall SWAT 4 after watching the trailer

My god, they actually put the fucking Calico in this game. 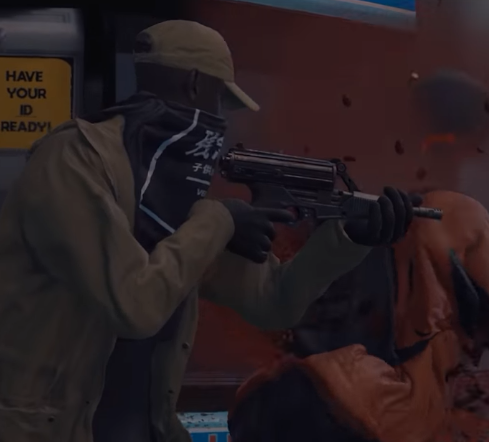 For those unaware, the Calico is the biggest joke of a gun ever conceived. It fires 9mm through a helical magazine that holds like 50 to 100 rounds, much like the PP Bizon. Unlike the PP Bizon, however, the Calico has its sights ON THE MAGAZINE. It also happens to be notoriously unreliable.

Definitely hope they make the AI really robust. I'm glad they already now mention modding. With good AI and modding out of the box, this game might actually have a decent lifetime.
And while I'm glad to see the P90, some of the weapon choices seem a bit weird/archaic from today's standards. Maybe it actually reflects reality in terms of the current SWAT loadouts, I wouldn't know, but that's what it seems like to me.
-Nova
Level Designer @ Campfire Cabal

What do you mean by weird/archaic?
Most of it looks pretty realistic, US Army surplus that is handed down is a pretty massive part of modern SWAT arsenals, although this varies from station to station since some are better funded than others. I watched it again and I don't spot anything myself other than what appears to be an AR-18 at 6:15, but I don't mind more guns since I love nothing more than a large selection of obscure and highly detailed realistic firearms. I think I also spotted what appeared to be a SCAR-L which isn't commonly known to be in SWAT arsenals.
If that actually is a AR-18 and I am not mistaken, I'm damn surprised. Whoever is selecting firearms is clearly someone who loves obscure guns like I do. I mean, the Calico tipped me off early there.

I guess what surprises me is that MP5, UMPs, M4s and that stuff is essentially the same as what we saw in SWAT 4, and I would have thought that stuff to be in obsolescence at this point. But then again, I havn't researched this extensively, and I'm sure these guys did. I didn't know SWAT got milsurp hand-me-downs, so that definitely makes more sense.
-Nova
Level Designer @ Campfire Cabal

MP5s are more or less replaced by this point in America, correct. They are used in lesser numbers now, since SBR AR-15s and M4s are superior in most situations, offering more power in a similarly sized package with less risk of over penetration but better armour penetration capability. MP5s are still iconic and still used every so often, though. Here in Europe they are still used a ton of course. UMPs are still common too.
SWAT doesn't just get US Army guns and infantry gear, they even get fucking MRAPs. Most of the SWAT carriers in America are just US Army hand-me-down MRAPs used in their Middle Eastern escapades.

Is there any information where these guys got their funding from?
Omnis Res Animus Est

Private investor, they said that in the second dev blog on the 4th of July, 2017.
Unfortunately their new site no longer has the dev blog after the gameplay trailer came out, but you can still find it on the Wayback Machine.

We’ve received overwhelming support from everybody regarding Ready Or Not, with a lot of individuals claiming they’d be willing to pitch in what they could to help this game grow. This rally of support was unexpected and VOID is glad that we have such an enthusiastic audience.
However, our company recently completed negotiations with an investor, effectively cementing the ability for us to develop on Ready Or Not in a more permanent fashion.
Click to expand...

This is an unreal engine 4 game, right?
Anything could happen.
Last edited: May 8, 2019

They've mentioned in their FAQ section that it's going to be Steam exclusive and with the Alpha/Beta testing to be handing out Steam codes I'm going to assume this is likely to stay the way it is (as it should be). I especially can't see it being exclusive since VOID being a completely new studio, they'd just be shooting themselves in the foot if they went the route of Epic Exclusive for a year community wise.

Honestly glad this is happening at all. Siege was fun for a little while but not only lacked singleplayer focused content but was completely devoid of what made these older tactical FPS games fun overall (like endlessly shooting a guy with pepper spray or beanbag shotgun while everyone else spams the interact button to scream at the guy to get on the ground).

There's a strict NDA and the way the Steam IDs are allegedly put onto the game make it really hard to even get screenshots but I can imagine something in-game leaking eventually. Also just a few tidbits I've gotten from random sources so don't take it as 100% yet until there's full evidence.

-There's two different buttons for compliance, one meant for getting civilians on the ground quietly while the other serves as the usual "PUT YOUR HANDS IN THE AIR!" SWAT 4 type yell.
-Game has free look similar to ARMA and a free lean.
-You can reload while looking down sights and has various reload animations.
-Certain guns such as a SCAR has immense recoil in comparison to something like the game's M4.
-No weapon customization yet (the option is "under construction" in-game) though each of them have been described to have different weights to them meaning that it'll probably have the same system SWAT 4 SEF mod had when it comes to the weight system depending on equipment.
-Can see feet.
-FoV Slider is in the game.
You must log in or register to reply here.