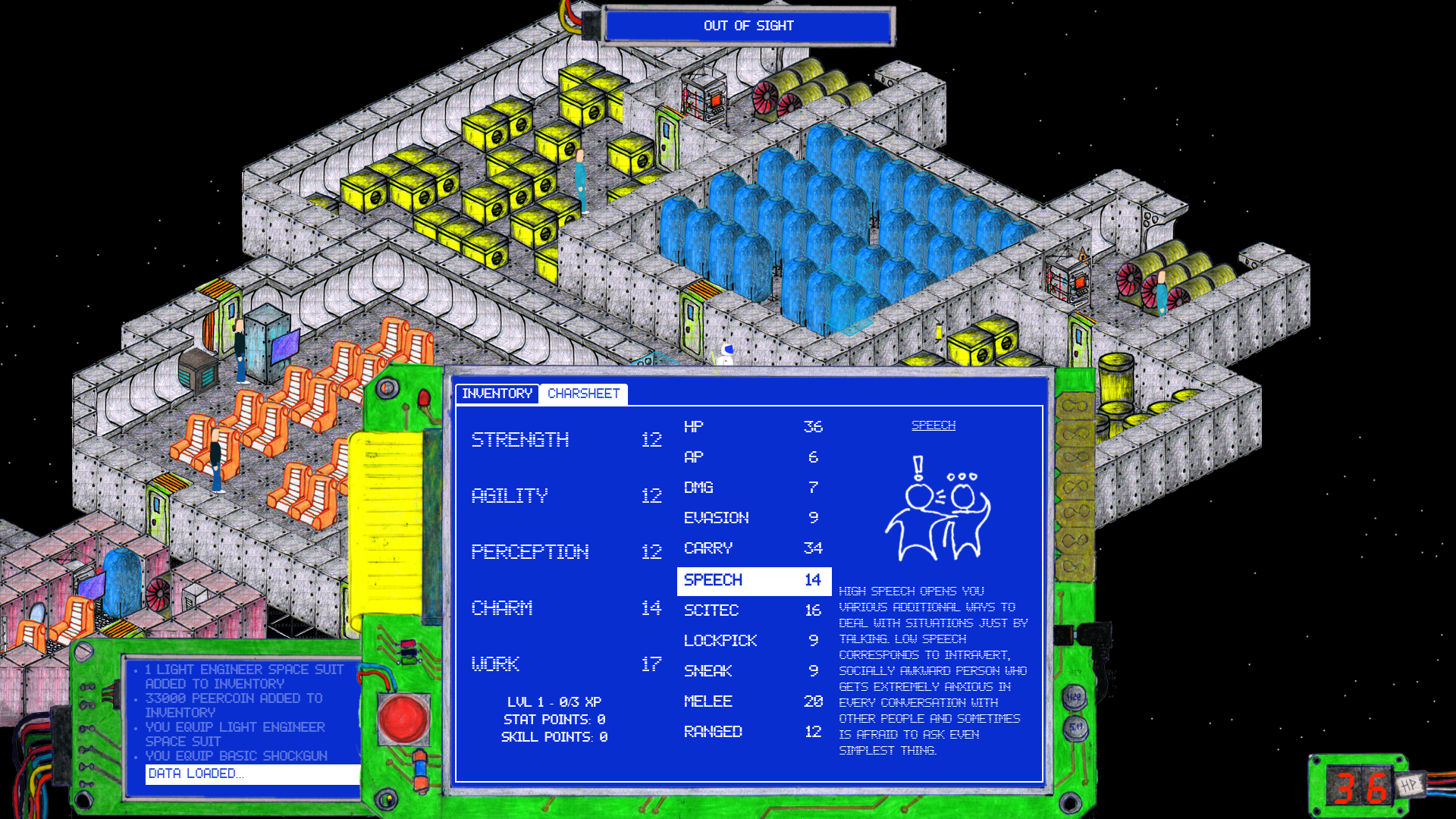 Hi! I wanted to invite you guys to try my computer role playing game I made.

Warning: game is complete, however, there are some bugs.
Save often (with [K]), ping me if anything.

PITCH: Isometric 1-hour RPG with skillchecks and everything
Play (in browser): https://kamazs.itch.io/space-wreck

I am a huge fan of Fallouts (FO, FO2, FO: NV) and I've always wanted to make a game like that. Turns out making RPGs is not easy .

In process of moving to Steam, game has been drastically changed visually and progressively improved in all areas, so much as it - IMO - looks and feels like a different game, remaster in a way. Game will have a price because, turns out, free games rank lower and might give the wrong idea.

I'll soon put on a Steam page, after that there'll be Early Access (because why not have a free +1 launch day) and, if there will be at least some people interested in, full release.
Last edited by a moderator: Sep 12, 2019
Developer of indie hardcore Fallout inspired cRPG "Space Wreck". <- Wishlist to support.

Sounds interesting! Will try to have a look into it. I like the artstyle somehow. Can't get more handcrafted than that!

Very Fallout inspired char generation (Attention! Comes with codex gender option) and I like the promise of the game start.
Last edited by a moderator: Apr 2, 2018

Game is great fun, just posted about it here because I didn't see your post.

I reiterate my wish for a downloadable version.

I'll have to play it when I get home. Remind me in 8 hours

I wonder if you can prescribe everybody with depression an hour or two of shitposting on the internet.
Click to expand...

I also would love a downloadable version
ツ

Hi! I wanted to invite you guys to try my computer role playing game I made.

PITCH: Isometric 1-hour RPG with skillchecks and everything
Play (in browser): https://kamazs.itch.io/space-wreck

I am a huge fan of Fallouts (FO, FO2, FO: NV) and I've always wanted to make a game like that. Turns out making RPGs is not easy .
Click to expand...

Chris Avellone said:
Oh, Infinitron, the joke is simple: That you report the news, as your unfortunate profile tag claims, which always make me wince when I see your claim. C'mon, don't be ridiculous. You are so biased, we can't even see you through the glare, but embrace it: It's part of your charm.

EDIT: I really mean this. I love Infinitron's comments, but it's not news, it's just... Infinitron. Change your profile tag, bud.
Click to expand...

Thanks guys for warm reception!

It has been played/seen by very few people so there are some bugs. If you encounter some, ping me, so I know what to fix.
e.g. For some people cursor is weirdly misplaced. This seems to be engine problem, try zooming your browser window until cursors match. (e.g. 80%, 67%)

I would suggest saving often (K on keyboard)

P.S.
One of the players reported that the game is, apprently, so hard core that you can die while creating character.

Kamaz said:
you can die while creating character.

Please don't. It's a staple of some PnP systems (Traveller) that doesn't appear in RPGs all too often.
Charisma-based casters must die.

Tried the game, i like this short yolo format and being a muscle hacker is fun.

I couldn't find a spare spacesuit at the bridge for the dude at the orion wreckage, but i found the alternative way to enter the broken ship in the form of a hatch.
I encountered a bug(?) and forgot to save though(edit: or more accurately, i speedread the game description and learned about the save only now), my character lost the ability to move in the middle of the punching session with the drone.
Also, sometimes i can't click on anything after i use "examine" on something, but this one is fixed by re-entering fullscreen.

Kamaz said:
Hi! I wanted to invite you guys to try my computer role playing game I made.
Click to expand...

Loaded it up. Will play it on and off today at work when I need a break.

However, based on the intro alone, there are plenty of grammatical errors. If you want, you can post the intro (I assume you have some kind of word doc or txt file with stuff written down?) and I'll happily edit it.

What's with the yellow washing machines all over the place tho?

mustawd. said:
However, based on the intro alone, there are plenty of grammatical errors. If you want, you can post the intro [..] and I'll happily edit it.
Click to expand...

Sure, here's the text:
In the XXII century humanity is spread across Solar system
But wild capitalization of market sparks bloody clashes between corporation and asteroid miners that spiral into anarchy
You are inexperienced captain fresh out of the Academy on your first voyage
It is not easy because you are complete outsider to the crew and they don't seem to have much respect for you
To make matters worse, your ship is targeted by some asteroid pirates
and the blast of a stray ion torpedo damages fuel controller chip
Somehow you manage to limp away to nearby spacewreck in hopes of finding a replacement
Crew proposes universal lottery. Despite your status, you feel compelled to participate
Everyone draws the straws
But you get the short one
But, umm, I fear intro text is least of my problems, there are around 30 000 words worth of dialogues there. :/


Hoaxmetal said:
What's with the yellow washing machines all over the place tho?
Click to expand...

I was going for cliche space cargo box with weird circular seal in front. But I guess they look like washing machines


Kabas said:
my character lost the ability to move in the middle of the punching session with the drone.
Click to expand...

Sorry to hear that

, I'll try to find the issue, unfortunately the combat part is pretty complicated. Just so you know, you can force end turn with [Enter] and try to end combat with [Ctrl+Enter]. Save [K] and reload [refresh or L] might help as well.

Turns out quite a few people tried the game - thank you! Lots of issues sprung up - stuff I missed when playtesting alone. More than I was expecting :/ but, I will try to fix it as soon as I can. Sorry for inconvenience.
Developer of indie hardcore Fallout inspired cRPG "Space Wreck". <- Wishlist to support.

Gave it a spin. Some quick reactions:
- Congrats on making such a complex, feature rich game.
- The KOTOR-level quantity of crates to open, some containing apparently necessary items, is quite annoying.
- I don't totally understand why the computer hacking options are identical when you use a computer on the main ship and on the wreck. Aren't these different systems?
- Something seemed to malfunction when using the hacking, where when I got into the inventory window after making the duplicate keycard, there was no way out (the red button didn't work because it said I was still in dialogue). I saved and reloaded and it seemed to let me continue with the keycard.
- In general, hacking felt kind of annoying as it was hard to figure out exactly what I was unlocking.
- I thought I made a deal with the guy to give him a spacesuit and he'd give me the part I needed, but then he just said to go ahead and explore the wreck. In general, there were a fair number of such interactions (the guy who had locked the elevator was similar) where it seemed like the resolution wasn't what had been promised.
- Tone is a little all over the place, ranging from slight earnest to tongue in cheek to fourth-wall breaking.
- In general, solutions to puzzles seemed to be presented before the puzzles themselves. For instance, I talked to the guy who unlocked the elevator before I discovered it was locked.
- I got various valuable things (money, a fancy necklace) without really knowing what they're good for.
- Hit a glitch where I couldn't reenter the ship from the shuttle because it said the door would only open when I'm wearing a spacesuit (I was). I had to pick the door's lock to reenter.
- It felt like maybe too much time was spent on the ship before going to the wreck.
- I lost interest after getting the guy on the wreck his spacesuit, so I'm not sure where it goes from there. I enjoyed the game from the standpoint of, "Wow, look what this guy made!" but as a game, it wasn't as engaging. Many of the quests felt like the kind of things that are made in a learn-by-doing game programming guide ("Now make a quest where you need to go and retrieve an item.") that just flowed into being a complete game.

Still, I think this is a really cool project! Congrats!
Wormwood Studios

Kamaz said:
Sure, here's the text:
Click to expand...

This is my edited version. A couple grammatical errors I corrected, but also made some stylized changes.

In the XXII century, humanity is spread across the solar system
Wild capitalization of the markets has sparked bloody clashes between corporations and asteroid miners, spiraling into anarchy - you really don't need a "but" there.
You are an inexperienced captain fresh out of the Academy on your first voyage - out of what academy? Police academy?
Being a complete outsider to the crew, they don't seem to have much respect for you - maybe add "or your command" to the end?
To make matters worse, your ship is targeted by roaming asteroid pirates - or you can just remove the "roaming" part. you don't need "some" here, tbh.
and the blast of a stray ion torpedo damages the fuel controller chip
Somehow you manage to limp away to a nearby spacewreck in hopes of finding a replacement - maybe replace "you manage" with "the ship manages"?
The crew proposes a lottery to determine who will (wait, what are they drawing straws for exactly?) . Despite your status as the captain, you feel compelled to participate
Everyone draws the straws - stylistically, you don't need the "the" there, but it's fine if you wanna keep it.
But you get the short one
Last edited by a moderator: Apr 2, 2018

Played a bit of it, very fun. However, as others have noted, there is a distinct problem with grammar, though not to a massive detriment of the game.

P.S. You wouldn't happen to be ESL? Hungarian perhaps?

I wonder if you can prescribe everybody with depression an hour or two of shitposting on the internet.
Click to expand...

What's wrong with the dice rolls? A literal white d6 flies above the character's heads every time someone is attacking, looks cool.
You should be fine with 15 and more in your primary skills.

Dices are cool, especially if you can see them

They ARE cool. Don’t listen to ducks for advice on rpg mechanics. 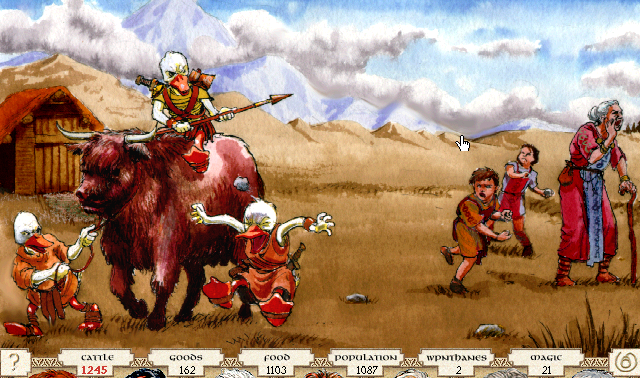 Kamaz said:
But, umm, I fear intro text is least of my problems, there are around 30 000 words worth of dialogues there. :/
Click to expand...

If you have it in a text or word doc, you can PM a download link and I'll edit it when I'm bored.

Will give it a go at soon, looks funky

Are there any sex scenes?
Forged when the world was young, and bird and beast and flower were one with man, and death was but a dream.......