I don't find any more twitter drama about it.

Talk video is up: http://www.gdcvault.com/play/1024929/Classic-Game-Postmortem-The-Bard

Unfortunately I don't have time to watch it right now, so you guys...

Well, it would have been a fun old time story talk if it has ended in 30 minute mark.

31:10 Refutes claims by Rebecca Henineman, and talks about the dispute with Brian Fargo
41:58 Christianity and game design

58:04 When asked about the burger easter egg in BT1, he says he don't remember ("Was that in my game?").
Ticket To The Moon | The Man Who Sold The World

LESS T_T said:
Well, it would have been a fun old time story talk if it has ended in 30 minute mark.

31:10 Refutes claims by Rebecca Henineman, and talks about the dispute with Brian Fargo
41:58 Christianity and game design

Hah, so you agree with those tweets? I guess I'd better watch this too.

OK, that was pretty great.

The 10-15 minutes where he talks about Heineman are sort of cringey, but somehow that just makes the entirety of it more amazing.

In a word: counter-cultural.

So the "other developer" was Heinemann. 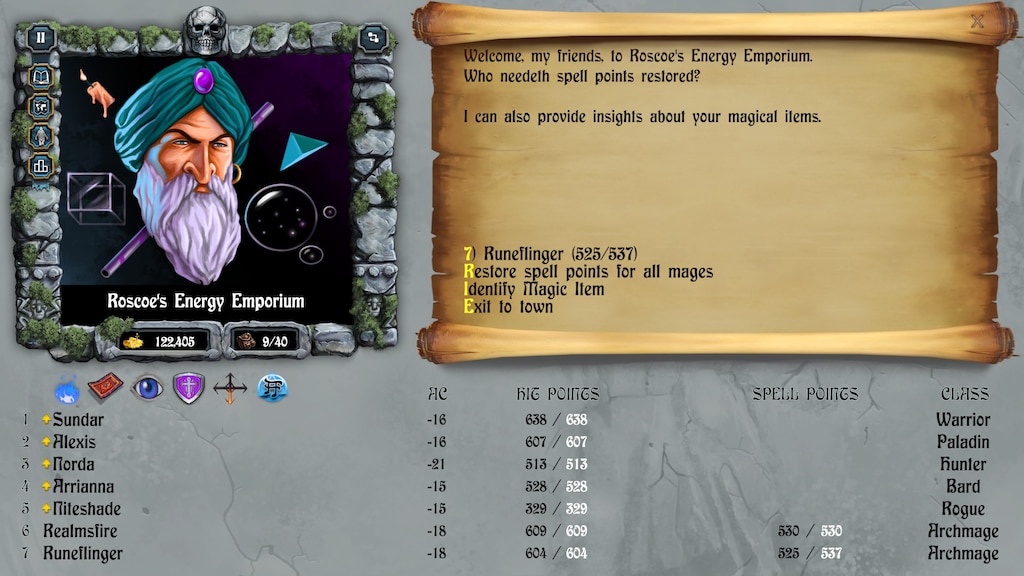 Does anybody else think Roscoe kind of looks like the old Ayatollah from Iran?
liberate te ex collum barbam

I finally completed BT 1-3 carrying a single party through the entire series! I played through using The Bard's Tale Trilogy remakes, so I posted most of my adventures in the thread devoted to the remake itself. However, this means I have now completed BT1-4 so I thought I would post something here as well.

Here are my overall thoughts on each game:

The Bard's Tale: Tales of the Unknown
Combat was extremely dangerous at the very beginning and very end, but otherwise not very difficult at all. I didn't care much for the dungeon layouts, which seemed to be just random collections of floors and corridors, though I know they are not random dungeons. Still, a fun time overall and getting mass damage spells was akin to when you first get Fireball in Pool of Radiance in terms of sheer destructive ability.

The Bard's Tale II: The Destiny Knight
Much of the challenge of this game comes from mapping puzzles and the "solve or die" snare traps you need to beat in order to get the parts of the Destiny Wand. Your party ends up being overpowered for 90% of the game, whether you transfer a party or not, and I liked the dungeons even less than in BT1 as they just seemed to be constant spinners and dark/anti-magic/anti-song squares.
It was worth going through, though, because...

The Bard's Tale III: The Thief of Fate
Far and away my favorite of the series. By the time you're playing this game, you have a seriously impressive spellbook with lots of helpful tools to control battles, and you'll need them as even an imported party will face some challenging battles. The dungeon layouts are by far the best in the series, as many of them are quite memorable while still being large and enjoyable to explore. Finally, the game ends with some difficult but extremely satisfying encounters where you have to eek out every advantage you can just to get through.

The Bard's Tale IV: Barrows Deep
Let's start with the positives. Character building is quite a bit more interesting than in BT1-3, as even a single level up can mean a significant increase in power or ability. Combat also has the potential to be much more interesting, and it can be a lot of fun early on in the game carefully selecting abilities during combat to maximum your damage. However, you will typically earn every useful ability before you're even half way done with the game, so for the second half of the game you are not really making any interesting choices.

I also hate how Bards are handled here. In BT1-3 your Bard provides you with free buffs that last until you have him sing something else, even inside/outside combat. In BT4, a Bard is basically a fighter/wizard, and that strips away what made Bards really interesting in BT1-3.

The game has a lot of logic puzzles (i.e. sliding blocks and other puzzles of that ilk). I didn't mind them at all in the dungeons, which I felt had a good balance between combat encounters, smaller puzzles, and typically one large puzzle. The problem is that these puzzles are all over the outdoor areas, as well, and by the time you are 5-10 hours into the game, you've seen every single type of puzzle the game has to offer.

The Bard's Tale IV: Director's Cut
Really quite an improvement over BTIV that addresses every issue I had with the game.

The Director's Cut allows you to skip most if not all of the logic puzzles. I did all the logic puzzles during my run through BTIV, so I skipped all the mandatory puzzles and just did the optional ones this time around. The game honestly played a lot better without the puzzles.

I had a lot of performance issues with BTIV. BTIVDC fixes this, and I had a solid 30-60fps throughout the entire game, with most indoor areas a solid 60+fps.

My other major issue with BTIV was that loot and character development stalled about halfway through the game. BTIVDC seems to have rebalanced things, so that you always have something to look forward to. Unlike with BTIV, I continued to find loot that was a clear upgrade over what I was carrying throughout the entire game.

All in all, I'd rank the games thusly:

So, I grabbed the BT trilogy at a hefty discount GOG sent me and I was curious so I installed it. Any general tips I should know about? I just grabbed the default party, they start at lvl 2 as opposed to a custom party. I walked a bit in Skara Brae and encountered some soldiers and some barbarians. I fled because I don't know if I should be fighting them. Is it expected to fight everything that you encounter?
Last edited: May 29, 2020

Not exactly everything but rather everything you're strong enough to beat, a big group of barbarians especially would slaughter you in the beginning, try, learn and pick your encounters.

I did encounter a lone skeleton and beat it.

Have at least two magic users, and have one of them develop into Sorcerer and get the Wind Dragon ASAP.
The other magic user should eventually become an Archmage, learning all the spells.
Thieves are useless, since traps can be opened safely with the TRZP spell for a cost of 2 mana or so. And there's no backstabbing.
Put a Paladin in slot 1 as leader; it will improve the party's saving throws.
Make sure your AC is a low as possible, as the AC is what determines chance to hit. At least it was on in the original BT 1.
Traveling around at night in town is more dangerous.
You can get a very nice Fire Horn from one of the pregens.
The Hunter may be bugged. His Critical Hit ability suffered from an "overflow" bug in some versions, resetting his skill every 16 levels.

I should replace the pregen thief with a hunter then? Or monk? The pregen party comes with 2 magic users already.

If you play the remaster, I'd choose the Hunter. Monk if it's the original.

Also, only the front 3 members of your party can be attacked in melee, which is why I like to use 3 casters. It's very powerful in the late game.
https://tinyurl.com/44zpc3ry <- Damning Proof of the 2020 Electoral Fraud -> https://hereistheevidence.com/


Cleveland Mark Blakemore said:
I thank god every day I drank that sodium lye at 18 months old. What a blessing. Like the radioactive spider that bit Peter Parker, it was the most incredible thing that could ever happen to a human being.
Click to expand... 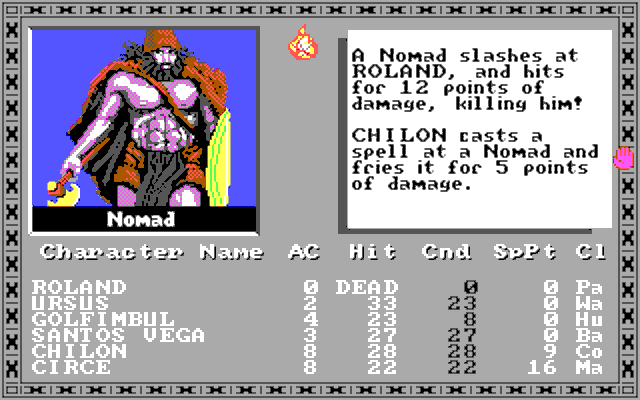 Should I savescum, or I'm fine rolling with it in this game? I'm asking because I've never played more than a few minutes, and I don't know how well balanced this game is. Can this be played like Wizardry, iron man style?
Lex orandi, lex vivendi.​

How does the save system work in this game? I've just loaded the game and half of my characters has tons of experience points missing, one of them even has to start over as a level 1 freshman. But my other three characters are just fine. WTF.

Is this some sort of anti-save scumming feature or just a bug? Because if I remember correctly last session I closed the DOSBOX window during a random encounter shortly after saving the game, but no one died then.
Lex orandi, lex vivendi.​

Your characters are saved only when entering the Adventurer Guild. The game world is not saved.

The game can be played Iron Man style, since even with a party wipeout you can still generate a character and go to a temple and resurrect the dead characters, if you have the funds. It's not as hard core as Wizardry where you need to go to the spot where your old party died with a Priest of high enough level to cast Resurrection.

Some tips:
The streets of Skara Brae is more dangerous at night.
Leave room in inventory for an extra item to prevent potential butthurt.

Oh, I know what just fucking happened, I needed to select Leave Game at the Adventurer's Guild to save my progress and I never did, the Save Party option only remembers their formation. I miraculously preserved some progress because I removed characters from my party every now and then, which for some reason saves them individually. Next time I'm reading the fucking manual before playing.

This is a fun game so far, I was expecting worse than this.
Lex orandi, lex vivendi.​

Got greedy and paid the price, not even my spare PC survived since I picked him up to grind some money and revive my fighter. 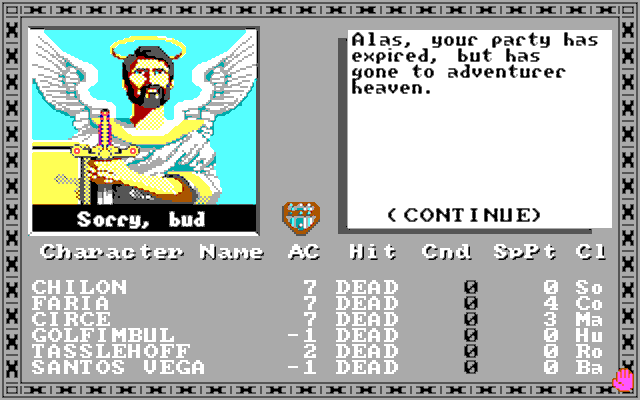 Really fun Wizardry clone, and definitely better than, say, Might and Magic 2. It's clearly a grind-heavy game designed around permadeath though, it doesn't auto-save your characters when they die like Wizardry did but that's just a little courtesy. Those who play this like they would play a modern tacticool game (that is, savescumming and resting after every couple of encounters) will find this game really boring.
Lex orandi, lex vivendi.​

Uh...you're not playing with your mages in the front slots, are you?

No, they were just the last survivors.
Lex orandi, lex vivendi.​

Michael Cranford is the creator of The Bard's Tale as well as Centauri Alliance, Darkseed, and the upcoming Wise Wands NFT CRPG. We cover all sorts of great topics and stories including the infamous disk incident, how Brian the cool dawg and Michael the computer wiz became high school buddies, cringe-inducing weirdness on the Darkseed project, and much more!
Click to expand...

So, I was messing around with the first Bardstale on the c64 and was looking at the saved parties. I see

------ the yuck characters....
Amy Allen was an intrepid reporter for the L.A

Tia was the half-Vietnamese daughter of latter 4th season antagonist General Fullbright. She was inducted into the team in "The Sound of Thunder"

Frankie Santana was a Puerto Rican special effects expert who helps the A-Team during the final season.

Need to have better alts than the chicks and SFX dude.

SUGGESTIONS? Probably should be 80s corny. Need 2-3 slots i guess for the remaster.
Last edited: Thursday at 4:45 AM

Professional wrestler Terry "Hulk" Hogan was a guest star on an episode. Maybe you could fit the Hulkster in a slot.
Stellar constellations rise, lighting my way in the night
Once again revitalized, to roam;
to never die
You must log in or register to reply here.
Top Bottom