The RPG that pissed you off the most

Tides of Numenera and Pillars. Words words words does not make a RPG, at least not a good one. Tyranny suffered from the same issues but gets a pass because the concept was interesting.

NWN2, the damn control system in that game, never could get anything that sat right with me. Lovely music though.

None said:
Tides of Numenera and Pillars. Words words words does not make a RPG, at least not a good one. Tyranny suffered from the same issues but gets a pass because the concept was interesting.
Click to expand...

Steam says that my total play time on Tides of Numenera is 11 minutes. The moment I loaded it up I knew what was coming. Surprised I had it open for that long, maybe it had long loading screens or something.

(to be clear, I got it for free as part of some bundle or deal. Still not worth it.)
Antiquity Studio's latest game: Theseus

ShaggyMoose said:
Oblivion, with its beyond retarded level scaling turning random bandits into heroes equipped with armour and weapons sufficient to bankrupt a nation and rats into god slayers. Also, bloom. Fuck bloom.
Click to expand...

Too bad both are hard coded.

thesheeep said:
Probably Inquisitor for me.

The worst part was that the game had some nice things going for it but those diablo-esque combat - except much worse, and even more combat. Good pick, i agree.
Click to expand...

True.
Many games are shit like that.
But Inquisitor was the first that came to mind which actually had so much promise that it made the shit hit even harder.

this game is fantastic tho
Non-post apocalyptic Sci-Fi RPG thread
List of RPGs with base management mechanics
The definitive, authoritative, and probably non-exhaustive list of non-(IBM) PC cRPGs

Modron said:
Icewind Dale 2, 40% too much trash combat that yielded neither experience nor loot.
Click to expand...

This fucked me off enormously, until ... https://sorcerers.net/Games/IWD2/tweaked_xp_tables.php

I'm trying to think of some RPGs that really pissed me off. I mean games I acually bought and gave an honest try. The closest I can think of is Bard's Tale 3, with all its bugs (like monsters not having any special attacks) which made it rather pointless to play. I took decades for an UOP to appear.

After that I've been quite picky about what games I buy, so I feel I've missed out on that exalted Codexian experience of delicious butthurt.

IWD2 pissed me off a bit, though, with some enemies that would just squeeze through invisble gaps in your shield wall of fighters and head straight for the mages. With an engine with no zone of control/opportunity attacks and no grid, that's just annoying and inviting save scumming.

Dragon Age 2, nothing redeeming about the game apart from that there are no technical defects that prevent you from finishing the game.
The only real upside to this pile of trash is that it had plenty of physical releases. Should an apocalypse happen, we can use the 1 page manual and the cover art as toilet paper.

Persona 5. The story pitch is horrible. Infiltrating people's souls and reprogramming their personalities is something the Stasi wish they could do. It's something the devil wishes he could do. Its idea of a hero is essentially Thinkpol, and it has to make the villains so cartoonish in order for that to work, if only superficially.
That, along with the fact that your first victim is, of all things, a gym coach, makes it seem like you're playing some scrawny nerd's revenge fantasy. The hot cheerleader likes you, all the cool and interesting kids wanna be your friends, you have complete power over the jocks that beat you up, and whatever you may do to them, you don't have to feel bad about it. It's sickening.

Second place would be Skyrim, not because it's dumb, but because it didn't commit to what it was going for. At least in Mass Effect, dumb as it may be, it gave me what I wanted. It let me fantasize I was a hero of a spacefaring civilization (like Erma Felna for non-furfags). In Skyrim I wanted a nordic-themed game, exploring the beauty of a fantasy medieval Scandinavia, planning raids with jarls, flirting with hot blondes and whatnot. The art style and music did a good job, but the gameplay made me feel more like a fantasy janitor than an adventurer. Just clean up this dungeon, clean up this quest marker. Neither the quest design nor writing had any thematic flair, it's like they were made by an AI. And it didn't commit to the nordic theme fully, it just went for generic fantasy with a vaguely norse flavour.
I decided to play Rune instead, it gave me what I wanted.
Dilin pleske ka hobotnica
Odma vatan osan sisa

Easily Dragon Age: Origins. I don't think I have ever played any other RPG which I started to dislike more and more the longer I played it, yet did not stop playing it until much later.

Might not have been in the best state of mind for it, but I still remember how frustrating the trek through the Deep Roads was and how at one point it literally made me feel like I was wasting my life. Not quite sure why, because quite a few RPGs suffer from overlong combat areas. For some reason it felt worse with DA:O. Some areas were better than others, but the second half of the Brecilian Forest, the Deep Roads, much of Haven with its unending stream of Cultists - and probably more that I can't remember - did overstay their welcome by hours and had almost no content outside of combat. Awful pacing in too many areas.

I eventually came back to Denerim (awful, disappointing town by the way) after having collected the allies and once I arrived at Howe's castle the game essentially threw me into another dungeon grind. Except against human guards instead of Werewolves, Undead or Darkspawn this time. The narrative context for it is there, but at least for my character there were no roleplaying options there and at that point I had very little tolerance left for yet another overlong grind. So I rage-quit and uninstalled it. I don't think I have ever done that with any other game.

I have tried writing on why I did dislike it so much in more detail in other forums, but I'm not sure how successfully. But these are two good articles that I pretty much agree with:

JackOfOwls said:
Any jRPG where there's little lolicon/anime girls in light frilly fighting armor to show off their bare legs and plenty of baby fat with a strong suggestion of puffies carrying weapons bigger than they are that scream "Hi-YA! every time they do a spin-twirl attack. They annoy me, and they creep me.
Click to expand...

Why am I not surprised that a debased kwan faggot such as yourself can't enjoy something as blessed as loli JRPG's? Stick to your obsidian/larian/bethesda homo circles and keep JRPG's out of your filthy posts.
Click to expand...

Outward and its not even close. I get the survival aspect but don't make things tedious just to be tedious and call it hardcore. Total BS.

Divine Divinity is what Divinity: Original Sin 1 and 2, as well as the utter garbage that is Baldur's Gate 3 (so far) wish that they were. A fun game to play. It's all been downhill since 2002 for Swen.

Combat sucked SO bad.
Complete let-down, should have just kept Fallout 1's simple but delicious approach
Fallout + Troika connoisseur: check out my Jason D. Anderson Wikipedia page
Facilitated Jon Van Caneghem's Matt Chat appearance and the Leonard Boyarsky interview series.
Finished PoE & Deadfire (Path of the Damned). Cyberpunk 2077 review: 5/10 (RPG-elements suck)
"Happiness is a special excitement, because unhappiness is always possible a moment later" - Francis Bacon (1978)
"...After I die I would like to be corpse exploded by a Diablo necromancer" - Josh Sawyer (2019)
"Next time you feel depression coming on...you should do what I do and go out and overturn some cars and bend railroad ties into balloon animal shapes. You'll see, it will make you feel a lot better." Cleveland M. Blakemore (2019)

Pillars managed to piss me off twice.

The first one I hyped myself up for as a real successor to the Baldur's Gate games, and it clearly shit the bed.

The second one I hyped myself up for after everyone say it was so much better than the first one, and surprise surprise... It wasn't. It was just shit.

Lionheart definitely made me pissed off.

NWN1 OC is another one.

Only mentioning the games I really would have wanted to like - can't really say that games of which I had no expectations really made me pissed off. Although on the other hand, I guess technically Fallout 3 pisses me off for raping the corpse of the Fallout franchise.
Last edited: May 19, 2022
"Well, overkill is my middle name, you know. And my last name. And all of my other names as well!"

Any game that starts off promising and then turns to shit. Such as: Legends of Eisenwald, Inquisitor, Lionheart, I'm sure there's a ton more.
Way too busy playing Shadowrun, ATOM RPG or Grimoire...

Fallout 3, not even close. Nowadays I feel more and more lukewarm even towards the original games (especially F2) but back then… "WHAT THE FUCK IS THIS?!" was in my head most of the time while I was playing that abomination of a game. Later when I calmed down I've made a conclusion that it wasn't all that bad IF you don't interact with NPCs and just wander around, explore stuff for a while. And at the same time see it as a standalone game (which it is, basically - the title is simply misleading).

jackofshadows said:
Fallout 3, not even close. Nowadays I feel more and more lukewarm even towards the original games (especially F2) but back then… "WHAT THE FUCK IS THIS?!" was in my head most of the time while I was playing that abomination of a game. Later when I calmed down I've made a conclusion that it wasn't all that bad IF you don't interact with NPCs and just wander around, explore stuff for a while. And at the same time see it as a standalone game (which it is, basically - the title is simply misleading).
Click to expand... 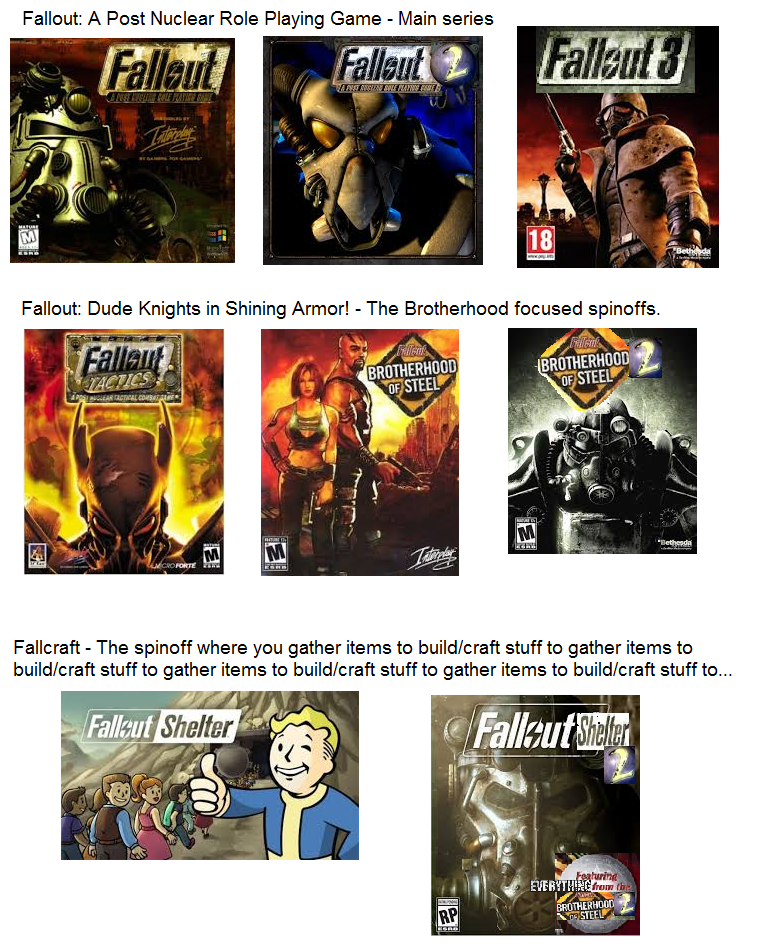 I thought they only play horse petting simulators around here?

BTW, I'm almost at 100 brofists now! Thanks bros!! Going to celebrate when I cross that mark... maybe get like 5 Big Macs and 10 McDonalds Apple Pies and eat them all in one sitting... no doubt passing out with apple sauce all up in the beard. haha. Now that's a party!

I didn't think it was the best, nor the worst, a bit bland, but playable, and I did find the story passable. But then chapter 2 hit, where the game totally shit the bed. I'm talking about the court scene. It baffled me at first, but that soon turned to anger. It still pisses me off to be honest.
Psst, hey kid, wanna try my mods? Try Equality of Men for MoW:AS2 or perhaps X-com Files Alternative Art/No flags/the Ultimate X-com Experience™? Maybe Arma 3 is more your thing? Then play my campaign Stratis Attack! I also welcome you to read my blog, dedicated to games. Recently restarted after a 10-year hiatus.
You must log in or register to reply here.