MANKIND IS DEAD. BLOOD IS FUEL. HELL IS FULL.

ULTRAKILL is a fast-paced ultraviolent old school FPS that fuses together classic shooters like Quake, modern shooters like Doom (2016) and character action games like Devil May Cry.
Mankind has gone extinct and the only beings left on earth are machines fuelled by blood, but now that blood is starting to run out on the surface, machines are racing to the depths of Hell in search of more.

IT'S KILL OR BE KILLED... AND EVERY SPLIT SECOND IS A MATTER OF LIFE AND DEATH.
Click to expand...


A playable public free demo is available on Steam as well.
Last edited by a moderator: Oct 16, 2021

Are they emulating the blurring effect when low resolutions are stretched to fit an LCD monitor? Or are the video and the screenshots on the Steam page just badly compressed? 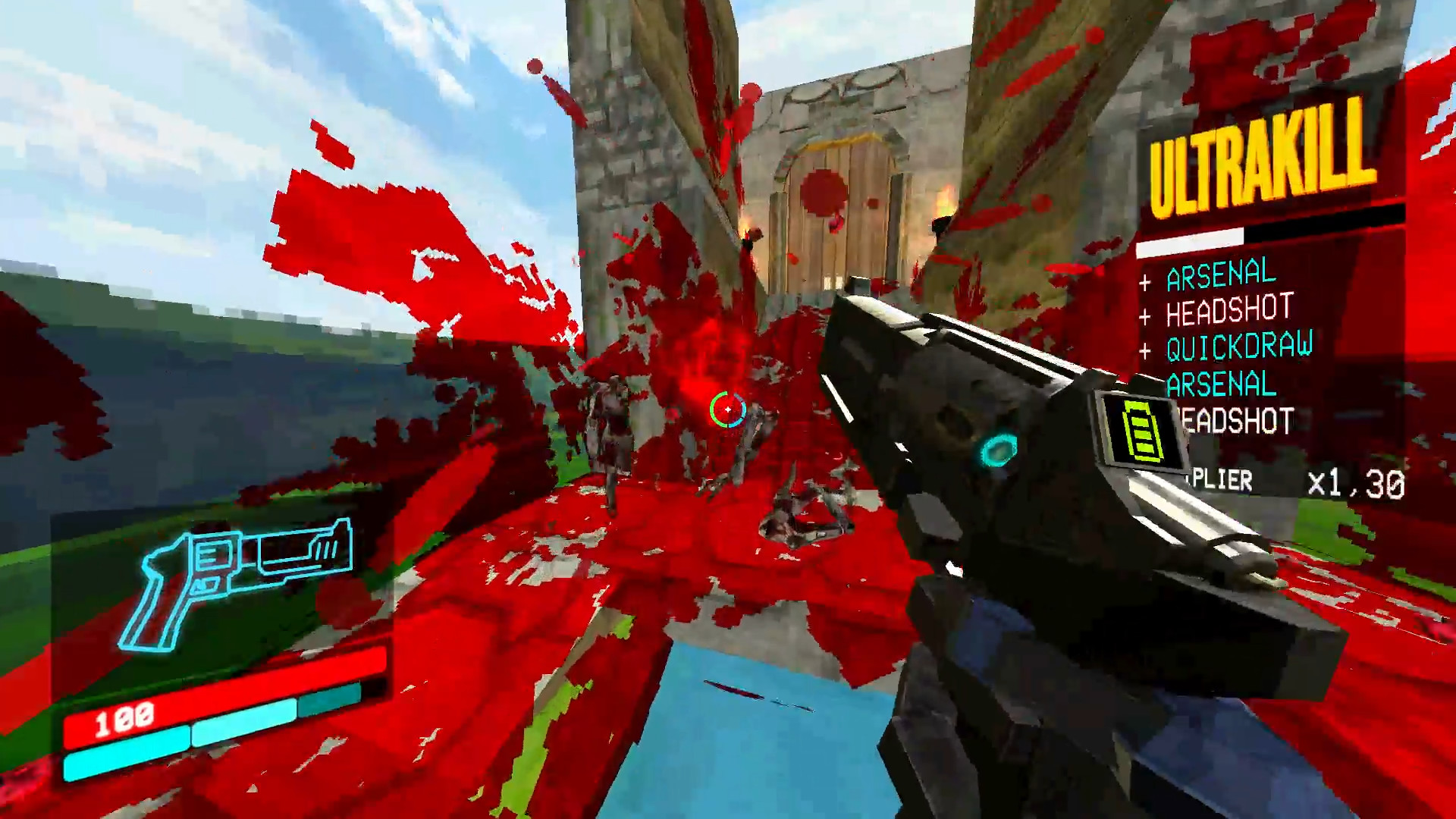 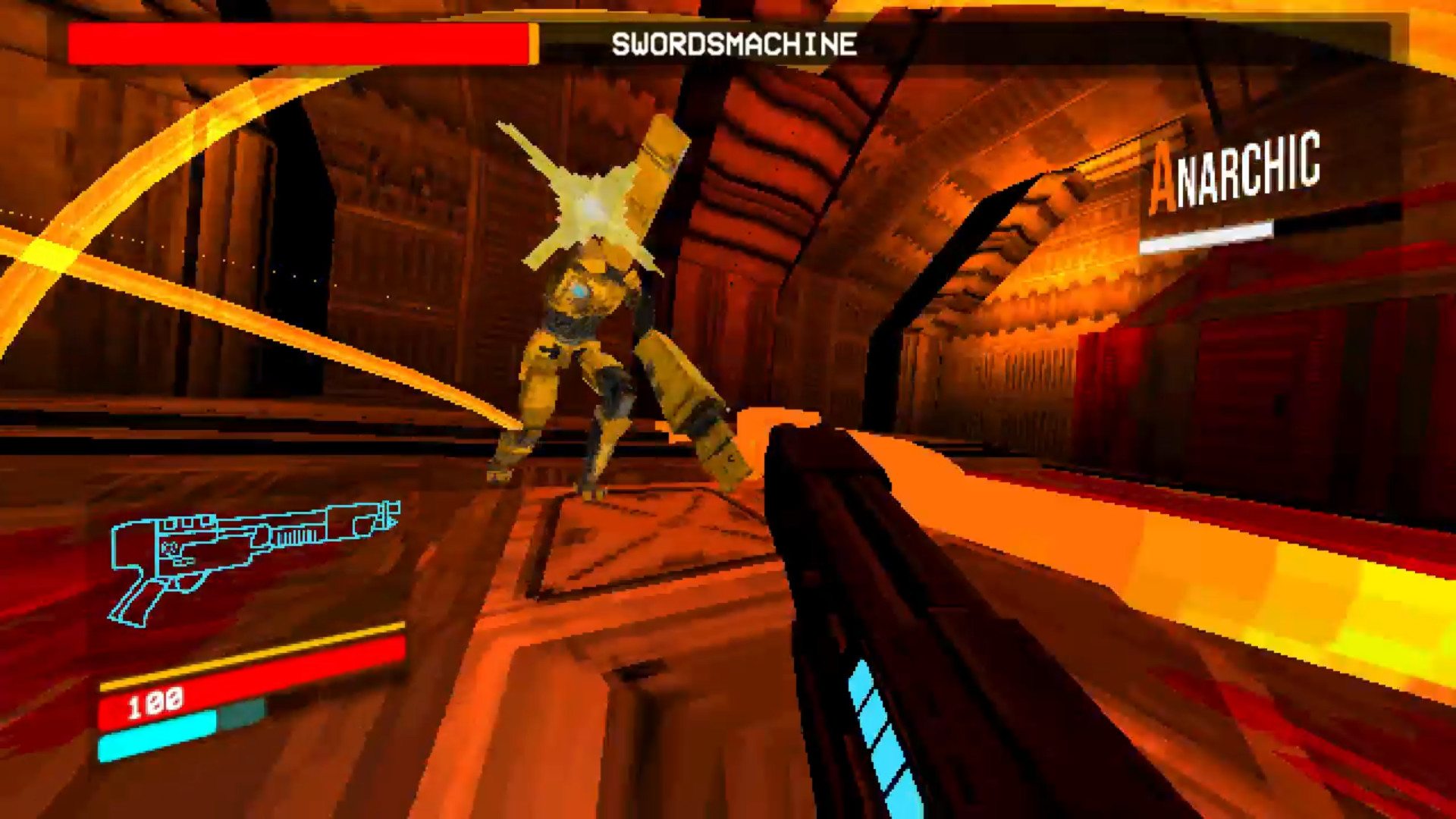 A few other screenshots don't have this, but the trailer looks strangely blurry at 1080p. 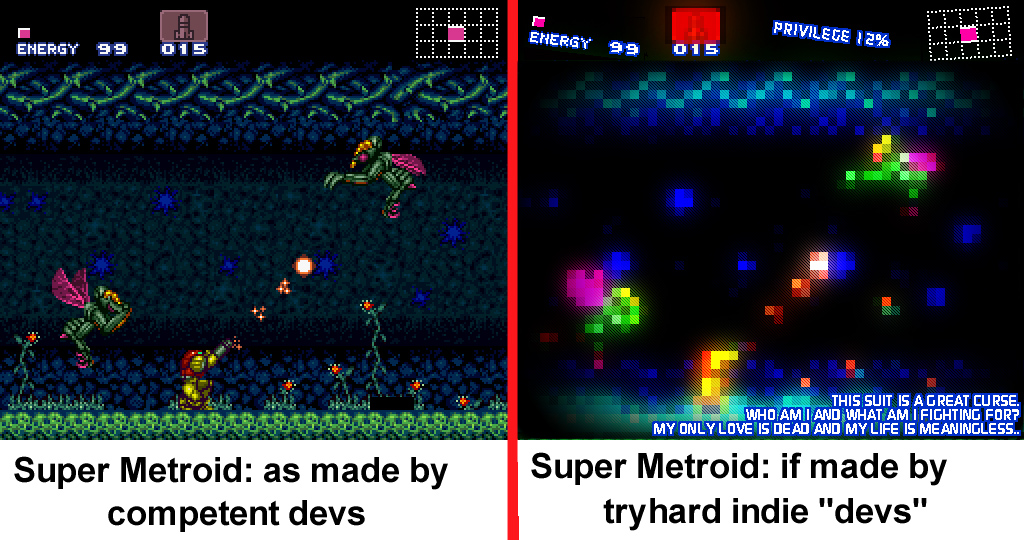 schru said:
Are they emulating the blurring effect when low resolutions are stretched to fit an LCD monitor? Or are the video and the screenshots on the Steam page just badly compressed?

A few other screenshots don't have this, but the trailer looks strangely blurry at 1080p.
Click to expand...

I actually like accurate retro stylization. It's just that what they've shown in the promotional material looks bad.

Yeah, turned off the "downscaling" feature to 0% in the game options and it looks decent enough for the art style it goes for. Also I was sold the moment I realized you can fucking parry projectile attacks with a really nice crunch to it. Honestly nice to see a FPS actually try to implement the style system to push the player to be constantly moving. Closest I can think of is Bulletstorm (which honestly boiled down to just kicking shit into stuff half the time for points along with being wayyyyy slower than this game) and DemonSteele for DOOM.

I'm all for shooters and shooters were the first genre I fell in love with, long before I discovered RPGs... but why does this have to look worse than shooters from the 90s, just curious. The outdoor map looks like fucking Minecraft for God's sake.
How to properly enjoy an RPG • Second-tier gameplay features in neo-RPGs • Edginess vs. fanboyism - Which is more beneficial, and for whom? • Accessibility - Under which circumstances is it good? When? How much? • Evaluation of various trends among KS and post-KS-era isometric RPGs • What is the right amount of metagaming? • Lost and forgotten • The Greater General Codex Theory of 'What is an RPG?' • On the topic of Consequence Persistence • Prestigious cinematography - a refuge from post-modernist consumer garbage • Memory Lane - Which were your first games on the PC?

Are they emulating the PS1 wobbling? WTF am i looking at.
†

I'm glad prosper finally found himself a job in gamedev

Personally I'm tired of all these "retro" games. They look fucking awful too.
Bah! No Linux client and it doesn't work on Wine. Pfft. Losers.

I played an early demo of that. It's a bit shite, frankly. It's not terrible but it's not something I'd pay more than 5 bucks for. Movement and controls feel off.

If your game looks worse than a N64 game on emulator, there is a problem with your art direction. This wobbling effect from PS 1 is one thing I really dont miss from that time.

Not if that demo is anything to go by. Shoddy gunplay, no real encounter placement (enemies are just continually teleported in right in front of you), level design so linear and on rails it makes even a Call of Duty campaign look labyrinthine by comparison, poor sound design, really bad readability on the attacks and movement of enemies, obnoxious visual effects that fill the entire screen and obscure enemies right in front of you.

And the graphics. It's one thing to be an indie dev who can't afford good graphics, it's another thing to go out of your way and actually spend time and resources to make your game look worse. Time and resources that could have gone towards making the game suck less.

And the whole 'defeat enemies to regain health' mechanic might have been novel once, but it's become so tired and overused that it just made me roll my eyes. Not to mention it makes me suspect the developers are taking the lazy way out so they don't have to worry about medkit placement and resource management.

In all the wrong ways. DMC isn't good because of its scoring system or its level design, it's good because its combat is fun. Copying those superficial aspects of DMC while neglecting core gameplay is a boneheaded approach to designing a game. And it shows.
Last edited: Jan 29, 2020

More to the point, how do you make a retro FPS but get inspired by DMC? How are they even related?

My guess: zoomer developers who never played anything but console games want to capitalize on the shooter retro scene. Even the PS1 wobbling makes no god damn sense. Nobody thinks of PS1 when they think of retro shooters. Talk about barking off the wrong tree.

And i was bitching about how Dusk looked. Lmao.
†

Lyric Suite said:
My guess: zoomer developers who never played anything but console games want to capitalize on the shooter retro scene.
Click to expand...


Project Warlock was funny for this... it had limited lives, no saving, and the developer said it was to "make it feel like the old school games." Wolfenstein, Doom and the rest of course did not have limited lives and no saving. I'm assuming he played console ports or something.

Lyric Suite said:
More to the point, how do you make a retro FPS but get inspired by DMC? How are they even related?
Click to expand...

I just realized they meant Devil May Cry, seeing DMC mentioned in that context made me automatically assume it was Deathmatch Classic :facepalm:

Not if that demo is anything to go by. Shoddy gunplay, no real encounter placement (enemies are just continually teleported in right in front of you), level design so linear and on rails it makes even a Call of Duty campaign look labyrinthine by comparison, poor sound design, really bad readability on the attacks and movement of enemies, obnoxious visual effects that fill the entire screen and obscure enemies right in front of you.
Click to expand...

We're about to witness a new wave of first-person shooters which no longer emphasize long-term strategy and resource management, but twitch action and short-term tactics instead. Where instead of worrying only about survival, these new games will also reward you for playing more efficiently and utilizing the full extent of your toolkit, and looking cool while doing it. Where instead of 'cerebral' gameplay the emphasis lies rather on a more arcade-ish high mechanical execution level and twitch skill. Or to put it simply, going from Dark Souls to DMC.

It makes no sense to judge these new games using the boomer shooters of yore as an objective standard for all FPS games to adhere; they're merely different design philosophies with different goals, and is why ULTRAKILL required a different approach to level design and health/ammo. It makes as much sense to say that the focus on exploration and secrets and resources in Apogee platformers is the reason why they're superior over the linear gauntlets that are most NES platformers. Take any random game in any other genre and consider whether adding in elements of limited ammo and health pick-ups would magically improve it if it didn't have them already.

Regarding ULTRAKILL itself, it's a game that asks of some creativity on the player's part, since just going for survival is kinda easy. You're given all these tools to kill enemies in cool ways: you can toss coins in the air and shoot them to make them ricochet at enemies, you can do a ground slam to launch enemies in the air, you're given a score bonus for using weapons you just switched out in order to encourage weapon variety, you can even parry your own shotgun grenade for increased effect. And there's more to come.

You'd be surprised how well made the sound design is; one of the vendor screen tips even tells you to listen to sounds in order to keep track of what's happening around you. All ranged attacks have a distinct wind-up sound, and some bosses have an unique wind-up sound for each one of their attacks. Concerning readability, all of the retro post-processing effects and excessive amounts of gore can be disabled, on top of an option that lets you display all enemies as a silhouette of a single color.

Also, is this mostly bitching about the graphics I read? For shame, Codex.

Durandal said:
Also, is this mostly bitching about the graphics I read? For shame, Codex.
Click to expand...


Since they made them bad on purpose, they are fair game for criticism. This shit is the cancer of the indie scene.
† 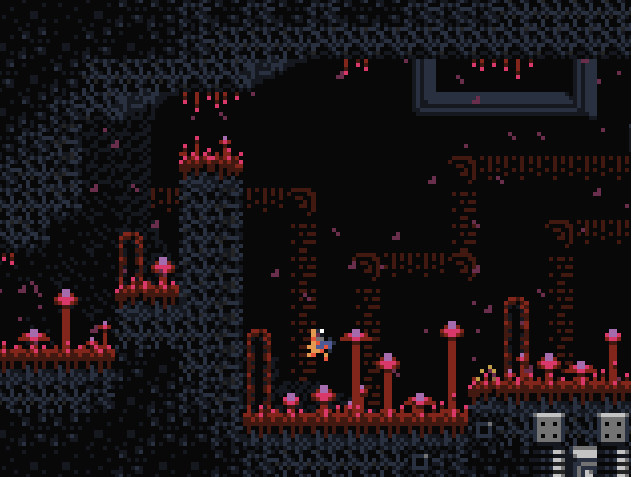 Which is one of the best metroidvanias released in recent years, but I admit the graphics can be hard to parse from time to time

DalekFlay said:
Wolfenstein, Doom and the rest of course did not have limited lives and no saving.
Click to expand...

Wolf3D had lives. Doom had pistolstart on death. Shock had restoration bays. Underworld had the sapling. All of these also had infinite saving at will. Naturally, the players chose the option with no downside, completely nullifying the games' unique elements and any sense of tension along with them. What I'm saying is I think it makes total sense to restrict saving. Doesn't always work, but worth trying.
That said, the whole combo-based exaggerated arcade FPS thing falls totally flat for me. Not like it's the first one either, there was Desync, there was Wrack, probably a bunch of others I'm forgetting.

looks like shareware from a 90s PC magazine CD
No, I do not have a faeces or anus fetish

Some of my happiest early gaming memories are from shareware (thought most of them were terrible, but the joy of going through all that stuff as a kid with not a lot of money was really great)
You must log in or register to reply here.