Haven't heard of this builder until it apparently released this week.

From the publisher's writeup:

Kapital: Sparks of Revolution is a sandbox city-builder focused on society management. It is a game about crisis and permanent conflict in human society. You will run out of vital resources in times you need them the most. People will protest and riot despite your best efforts to help them. Not everyone will survive.

You’ll have to run a city with limited resources. To balance between people's needs and city development. To deal with angry crowds on the streets. You are the one to shape the future of your people. Just remember - there is no way to make everyone happy.

People whose needs go unsatisfied will hold a grudge against your rule. Some of them will become dissidents and radicals. They will form secret societies to overthrow you. Protests on the streets will turn into massacres and riots. You have to make a tough choice of which class to support and which to suppress.
Click to expand...

Looks like it might be fun in a Tropico meets Trotsky kind of way. The way Tropico handled society management on top of the city building experience hasn't really been topped. It sounds like the game is definitely taking inspiration from Tropico and amping up the socio-political management pieces. 1C releases are notoriously all over the place in terms of quality (anywhere from shovelware eurojank to hidden gem), but this one looks promising. If it allows for customization of your dictator most benevolent ruler and factions, this could be a good future candidate for a LP in the Codex Playground. Anyone tried this game yet?
Last edited by a moderator: Apr 29, 2022

I just hope it's not completely rigged like that other game where despite having lots of choices you were forced to go progressive.

Niggerino said:
I just hope it's not completely rigged like that other game where despite having lots of choices you were forced to go progressive.
Click to expand...

Agreed, I am hoping that half of the fun in Kapital will be in oppressing and exploiting the classes you choose. I am running a "demo" version of Kapital now to see if the gameplay delivers. Put about an hour into it last night and there's some promise that it may allow greater freedom than Tropico to run the government the way you want. The only small criticism I have about the factions so far is that it is only the 3 classes (workers, aristocrats, and bourgeoisie) that you have to deal with. Would be nice to have a religious faction as well. There was an appearance by a religious leader in the game, but it doesn't immediately appear that they will be a faction that must be contended with.

Like Tropico, only certain educational / social levels can work certain jobs. I just passed a "policing" act in the game and was building the prison when I had to leave the game for the night. Oddly, the police are manned by the "aristocrat" faction, which seems odd. This would presumably make it difficult to fuck over the aristocrats, as you need them to run your police force. Perhaps there is a future act where you can "draft" members of the populace to make up your personal police force / army.

Also similar to Tropico and City Life, you need to build structures for housing and entertaining each social class. Unlike City Life, you can seemingly place low class housing right next to mansions for the upper class without anyone batting an eye.

The roadways are very simplistic and the map is small, though this may be a symptom of running the tutorial at the moment. There are some minor QoL issues with the interface, such as there being tiny icons that tell you whether a building is connected to a road or not. These icons are small and blend in with other icons that mean different things such as "building closed for the day". This combined with somewhat wonky detection of roads by placed buildings means you can easily overlook that a building is not connected to a road, and thus nonfunctioning. There is also not as many factors that will get the populace angry with you as in Tropico. Basically, most factions are just wanting housing, food, and entertainment. This might change as I progress further, but for now the residents' needs are pretty bare bones.

On the good side, there's already been a minor riot by the bourgeoisie over access to entertainment (in this case, burlesque dancers). I was able to make them a promise that we would deliver, and they went away. There's promise here but it's perhaps not quite as deep as I hoped. We will see.

Location
Between the pages of Potato's "Republic" 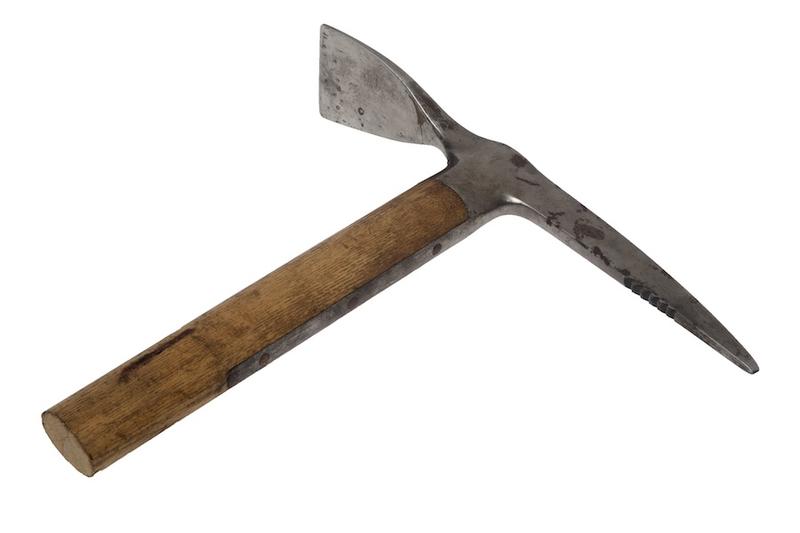 I have played the full version for some time and I can give a few impressions here. First of all there's no progressive politics, the whole game is about fighting the resource war.

You have huge swings of resources depending on what shift you're in. There's the day/work shift, the after-noon/leisure shift and the night/sleep shift. During the day you rapidly use up your money and grains to produce food/alcohol which you than rapidly use up selling them to your pops for money, with some stability returning in the night. These can go from full stock to zero before the day shift is even over, and if you run out of money all your production will stop. What's worse is there are no stats or graphs to tell you your daily consumption/production so you mostly have to guess whats going on, and expand storage capacity to satisfy the daily needs.

The three pops are nobles, bourgeois and workers, and every building can employ only one type of pop. What's funny is that the nobles are by far the most important since they work in healthcare, research, and police. There's very little migration control so you're constantly having some influx of pops which can strain your resource consumption. There's a shit ton of upgrades you can research but they all cost money and materials. Political acts you can sign are mostly about unlocking buildings, while the advanced acts give bonuses and some slight changes to game mechanics.

To stop the rambling, game isn't bad but is pretty hard to manage. Much more neurotic than the famous banished death spiral, here the death spirals are everywhere.

Bruh, the city is littered with corpses 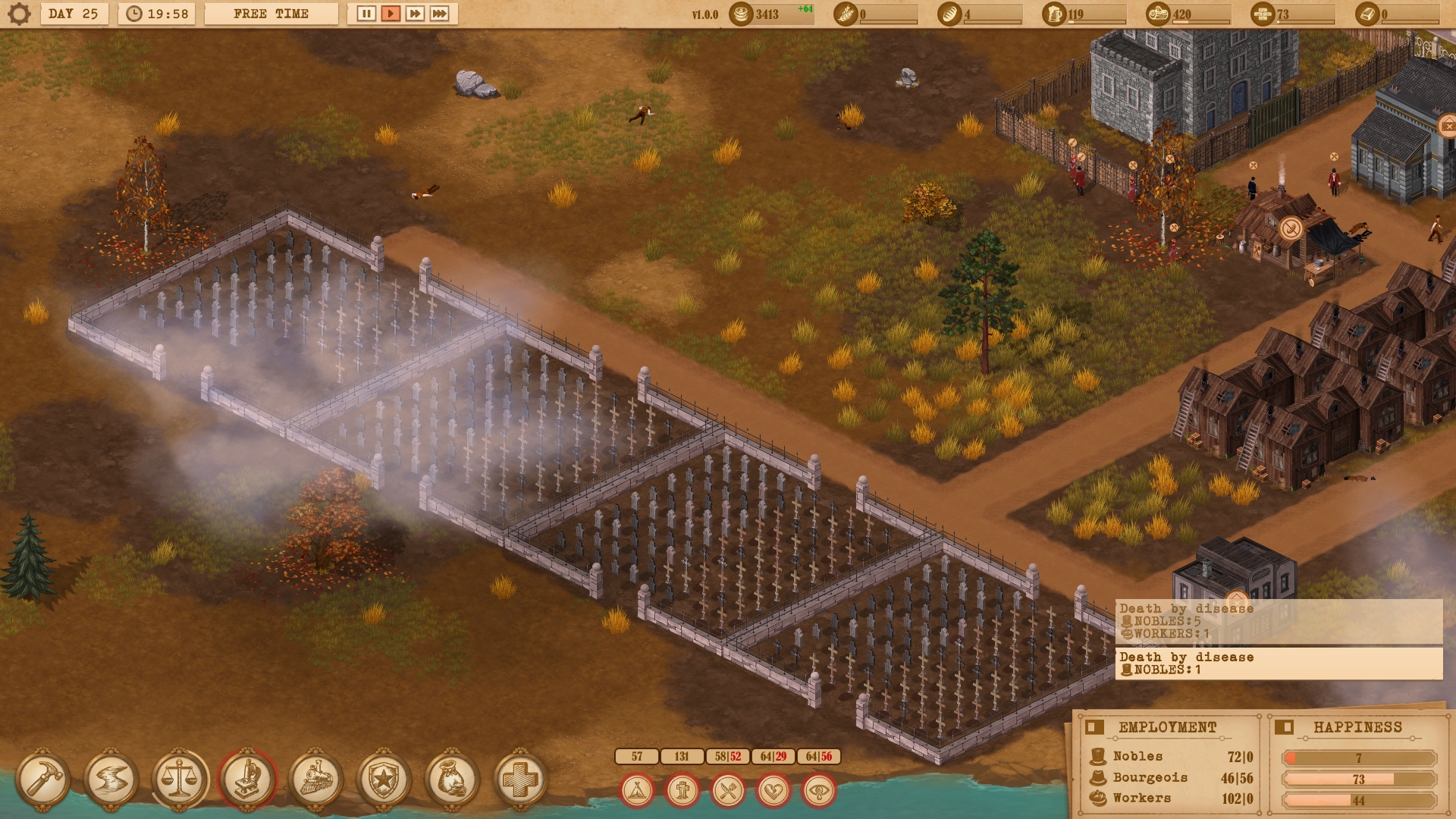 200 dead on the streets, 90 homeless, everything is going up in flames 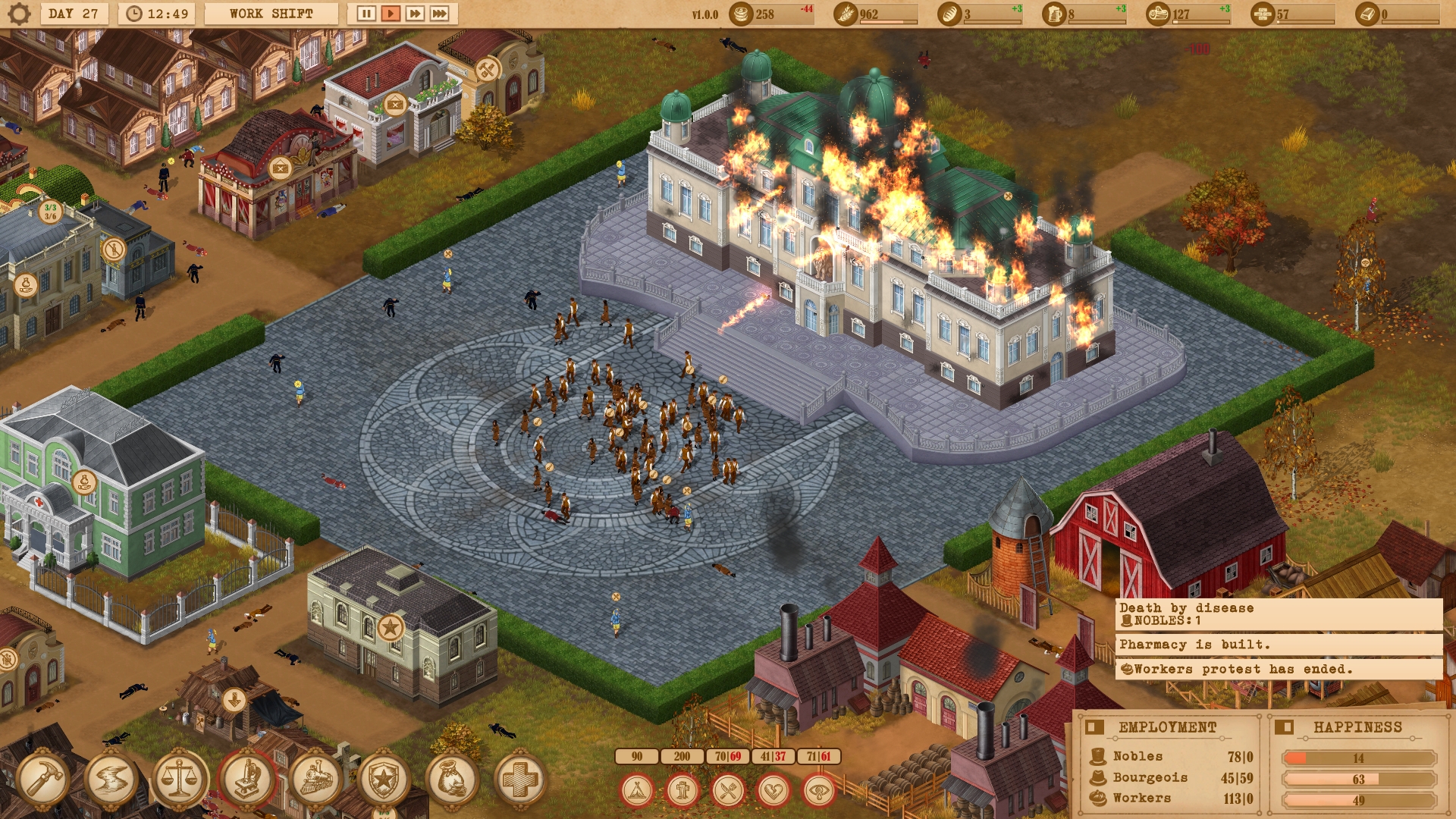 The previous report was on normal difficulty which was insanely hard, this time I managed to reach endgame on easy. Lategame is really annoying, you just have to manually upgrade everything, manually service production buildings and manually bust up gangs once your secret service gets going. Very boring. And even on easy I still get hundreds of bodies on the streets, pretty ridiculous.
You must log in or register to reply here.
Top Bottom