Jack Dandy said:
Just read the new bit about orcs and berserkers, very cool! Do they attack several hexes at once or something?

Also, please put Disqus on your site for comments. It's good.
Click to expand...


The Berserkers? It depends on their weapon. If armed with their unique Berserker Chain they can attack either a single target or all 6 hexes around them at once with a devastating round swing - luckily it isn't particularly accurate. If you loot one of those weapons, you'll be able to do use these attacks as well - though at a very high fatigue cost, so few men (i.e. those heavily specialized in fatigue regeneration and not overly burdened by armor) will be able to use it in battle effectively.

I've forwarded your suggestion about Disqus.
Click to expand...

Greenskinz are a major incline so far. I love the art. And suggestions? Sure, why not.
Goblin assassins! :3 Just circling whole battlefields to suddenly jump from the cover on the unguarded, light targets. Or even better, using decoy things like fake bushes/barrels(Basicly, any props) or other stuff they can jump out from when battle bros are passin' thru.

Maybe some kind of Wargs/Warg riders? Could be tricky(especially in making their icons) to make them able to dismount or mount wargs, but that would be awesome.

Goblins, imo, are the most interesting and unique faction we have so far. Both goblin ambushers deliberately hiding in bushes and goblin wolfriders are in the game. We'll do a proper reveal in time.
Battle Brothers - a turn based strategy RPG mix
Now on Steam Early Access - get it from our website or on Steam

Have a closer look

Warrior and Berserker in original resolution: 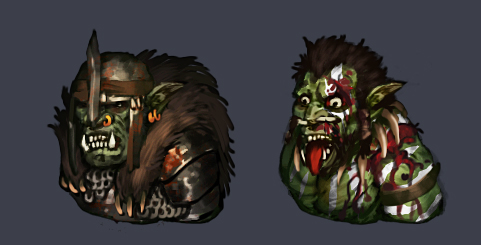 Location
the great potato in the sky

You want to see the fear in the orc's eye as you cut him with a greatsword, don't you?

Rpg Codex RPG Maker Contest. Play my shitty game. Despair.
Labyrinth of Touhou 2. How many waifus can fit in a blob?
Random stuff on Youtube.

And here are some ingame assets.
Just as a disclaimer: The Orcs are wearing different sets of armor, just like the Battle Brothers. So this is just one set of armor for the Orc warriors. I will add more in the polishing phase

Niektory said:
You want to see the fear in the orc's eye as you cut him with a greatsword, don't you?

Now if they could just enslave entire nations with necromancy they could do what BioWare has only dreamed of....
Combat is an antiquated petty-bourgeois concept promoting colonialism and racial subjugation.
My Classic video game music channel | Exult Setup Guide | Deus Ex in Win 7 | FRUA Setup Guide | My Music
Use the report function for retardo-alerts.

Damn this game looks pretty. Pretty in the sense that the graphics are clean, easy to reckognize who is who and what he is using and wearing, and also they look sensibly realistic, no stupid shoulder pads and glowing swords of dragon poking.

Let me take a look at steam and check if I can acquire this baby right now.

Edit: Oh not yet? I should have read this tread more carefully. Anyway, combat demo it is for now!

Juanhijuan said:
Me not a bot.
Click to expand...

Sawwy, super late to the party and may have asked it before, but is this on a known engine (unity, gamemaker, ue) or are you rolling your own?
pakoito's game ideas dump place thingy - UPDATED Nov/2021

We use our own solution for this, mostly written specifically for this game.
Battle Brothers - a turn based strategy RPG mix
Now on Steam Early Access - get it from our website or on Steam

In this week’s update we have a lot of big and small additions to the game. The largest part was implementing all the skills, graphics, weapons and characters of the orcs into the game and to teach the AI how to make good use of all that. On top of that, we added a bunch of new weapons that have been outstanding for a while, and we implemented new UI features and elements. Lets go into some details…

Orc Implementation
After last week’s faction reveal we’ve been busy putting all the orc assets into the game. Most of the work was not adding our greenskinned friends to the game themselves, but improving the AI to make the best use of all the nice and shiny new weapons and skills. The AI had to learn how to effectively manage and account for fatigue and morale which the undead did not have to do, as well as a lot of other tactical considerations to allow for the orcs to behave just like we want them to. As a nice side effect, the AI of the undead also benefitted from this and now has some new tricks up its sleeves.

We now have a line battle scenario in the game where a band of Battle Brothers faces off against a bloodthirsty band of orcs lead by a fearsome Orc Warlord. Hopefully we can show the ensuing battle, or massacre, in a commented gameplay video next week. As mentioned before, the orcs will require a drastic re-thinking of the tactics that were effective against the undead. Of course, in the full game campaign where you meet both orcs and undead, you’ll have to adapt quickly to any new enemy or you’re going to have a hard time. 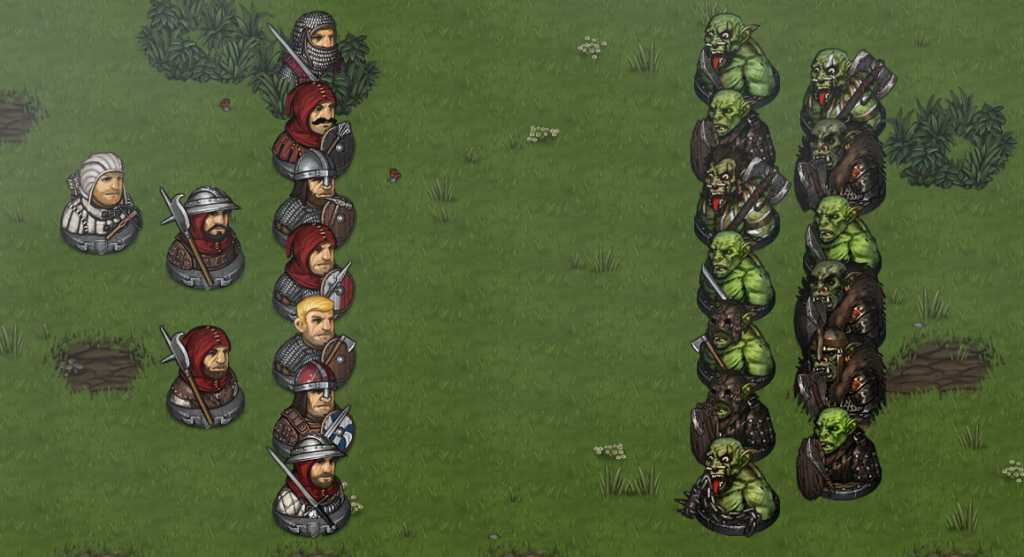 UI – Drag & Drop and Combat Statistics
Another big chunk of work has been done on improving the UI and adding new features to it. A thing we’ve been working on for a while is the drag & drop mechanic for managing all your armor, weapons and equipment. This is actually more work than one might expect, but we’ll spare you the tricky details and just let you know that its in the game now

A completely new feature that we can now check off our list is the combat result screen that shows after tactical combat. The screen shows two tabs: Statistics and Loot. 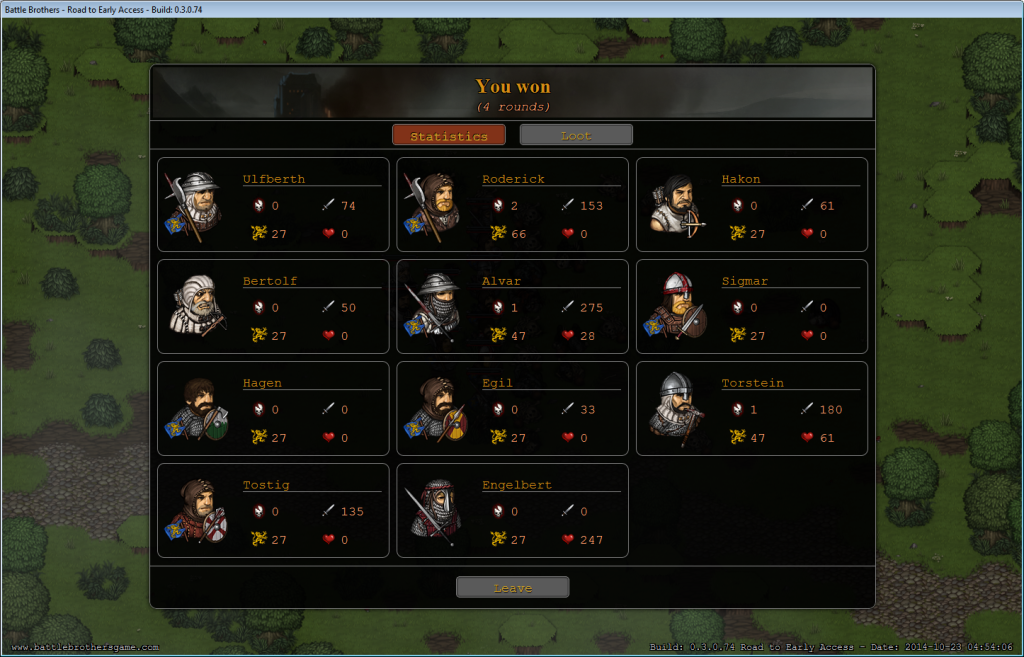 The statistics show all Battle Brothers that participated in this particular encounter. For each Brother you’ll see the damage dealt, the damage received, the number of enemies killed, the experience gained, the number of days a Brother will be wounded if he received any injuries and whether he gained a new level. All these stats are not only great for the player to see but they also help us evaluate the combat performance of various equipment set-ups. 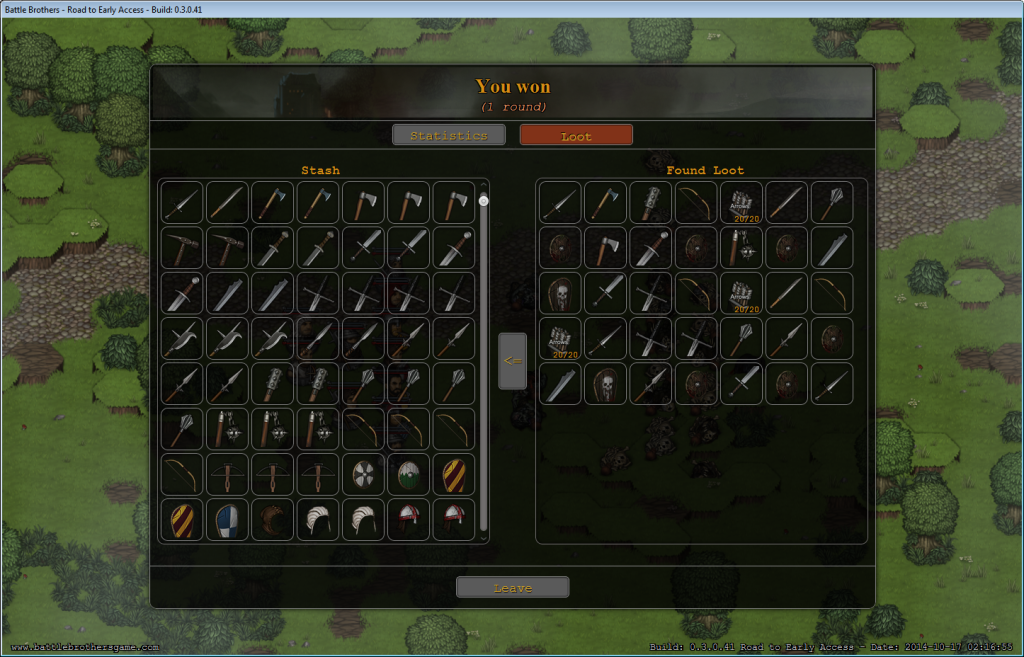 The second screen shows the loot you found during that battle. Here you can directly drag & drop all the equipment into your stash from the battlefield. In the loot screen all equipment that has been dropped by enemies during combat will show up – so don’t worry about picking all the stuff up during battle. Also, you don’t have to run around the map after combat looking for any drops you might have missed.

New Weapons
As you all know there can never be enough weapons to cut down your enemies with, so we added a bunch more. Besides the orc weapons we added the Greataxe to the Battle Brothers armory. Even more exciting, we now have the first throwing weapon in the game: The Javelin. We have a whole bunch of throwing weapons on our backlog that will be added in time, but we’re happy to finally have the first of its kind working in the game. 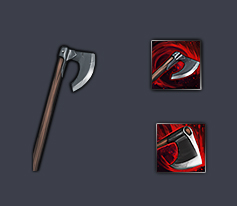 ​
The Greataxe is a two-handed battle axe that can be used both to devastate a single target as well as be swung around in a circle around a Battle brother, potentially hitting every adjacent tile. Another thing it excels at is destroying enemy shields. Most smaller shields wil be destroyed with a single strike of this heavy axe. Because the Round Swing attack hits friends and foes alike, the Greataxe is best used by separated Battle Brothers at the flank of a battle line so that they have enough room to use their axe to full effect. The attack also isn’t particularly accurate, so the Greataxe is best placed in the hands of an experienced man and not a freshly recruited farmhand who never held a weapon before.

​
Javelins are small throwing spears that can be carried in one hand and are usually thrown directly before close combat to weaken the enemies’ battle line. They come in small stacks of four but can be easily used and carried along a shield and one-handed weapon. This makes the javelins a great and flexible addition to most Battle Brothers’ equipment. Their range is rather short compared to arrows and bolts, and they are exhausting to throw. However, their damage is high even against armored targets. What is more, they can also damage enemy shields if they hit those, weakening them or even rendering light shields outright unusable. This makes them great tools to be thrown at the enemy battle line before engaging. Of course, the AI will now use Javelins as well, especially if you set up a nasty defensive Spearwall it has little interest in engaging head on.
Click to expand...

By the way, I am finally reworking the character face set up. So from now on we've got face, hair and beard on separate layers. So instead of 20 Brothers we now have a million or something!
I know some of the haircuts are pretty awesome! 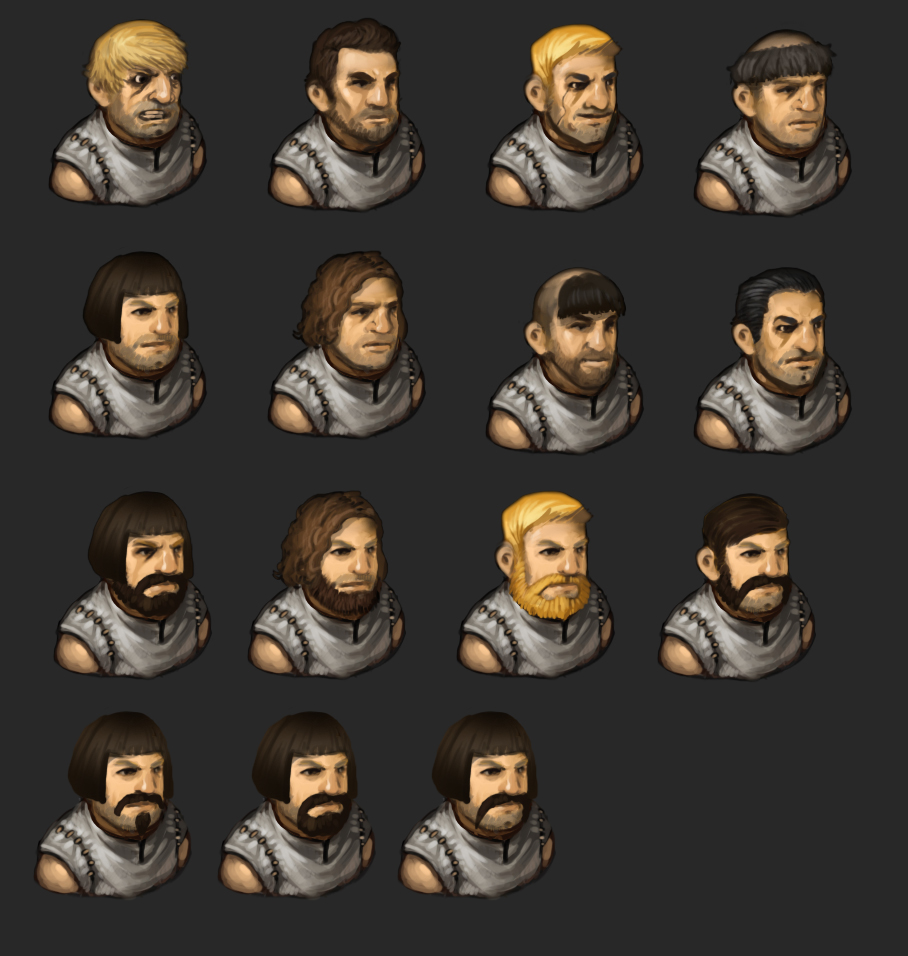 Have some more hair!

Some hair overlays would benefit from transparent shadows gently darkening the underlying face.

There will be blood!


So far we talked a lot about the Orc faction but now it is time to see the greenskins in action! Our new gameplay video covers a line battle against the orcs with a full commentary from one of our devs. You can expect a lot of carnage and get properly scared of the green menace.

Also, there is a lot of new stuff in the video like two-handed axes, javelins, battle-statistics screens and more so go ahead and check it out:

Think you could animate the stun status? When the stars are static you don't notice them that easily.

Hey Jack Dandy,
animated status effects would be awesome and after a quick chat with one of our programmers I can assure you its realizable with our engine. The only thing is that right now it's a low priority thing.
It's definitely sitting at our back log

As a token of credibility have a look at some ugly fellas created with my new face generation assets hehe. 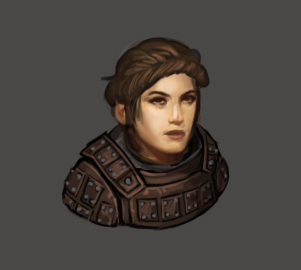 So, sisters will be there too?Nice
Time is not counted from daylight but from Midnite