Ascension to the Throne for free, its a really good game and well worth playing.

There are several good games there, I recommend Dex, just that for 1 euro is a bargain.

Some shenanigans needed, but Arx Fatalis is given for free after that for those 2d6 people that don't have it.
https://bethesda.net/en/article/6rPaxM6vcW0ZgCaK6DCqKe/welcome-to-arkane-20
"Balance in all things". After understanding that thought, Sawyer came to *know* the secret teachings of balance.

itch.io is having a charity bundle. Over 700 games with more being added:
https://itch.io/b/520/bundle-for-racial-justice-and-equality

The vast majority of these games don't speak to me, but I did find more than a few interesting ones.

Location
The Centre of the Ultraworld

Irata said:
itch.io is having a charity bundle. Over 700 games with more being added:
https://itch.io/b/520/bundle-for-racial-justice-and-equality

The vast majority of these games don't speak to me, but I did find more than a few interesting ones.
Click to expand...

Anyone who buys this bundle now legally owns this game

Irata said:
itch.io is having a charity bundle. Over 700 games with more being added:
https://itch.io/b/520/bundle-for-racial-justice-and-equality

The vast majority of these games don't speak to me, but I did find more than a few interesting ones.
Click to expand...

Ends in a few hours. Here's a small selection of games that look interesting: https://itch.io/c/938385/rje-picks
Includes Pyre, Pendula Swing, Octodad, MidBoss, Legend of Hand or Babysitter Bloodbath (from Puppet Combo).
all people must be loved and respected

I bought it a week ago and it's a great bundle. Celeste alone is enough to make it worth it. I played night in the woods past week it was nice. Kinda a pace break after completing so many rpgs during the last 3 months
!!!! BLACK LIVES MATTER !!!!

Would you look at that - Void Bastards finally included in Humble Choice. 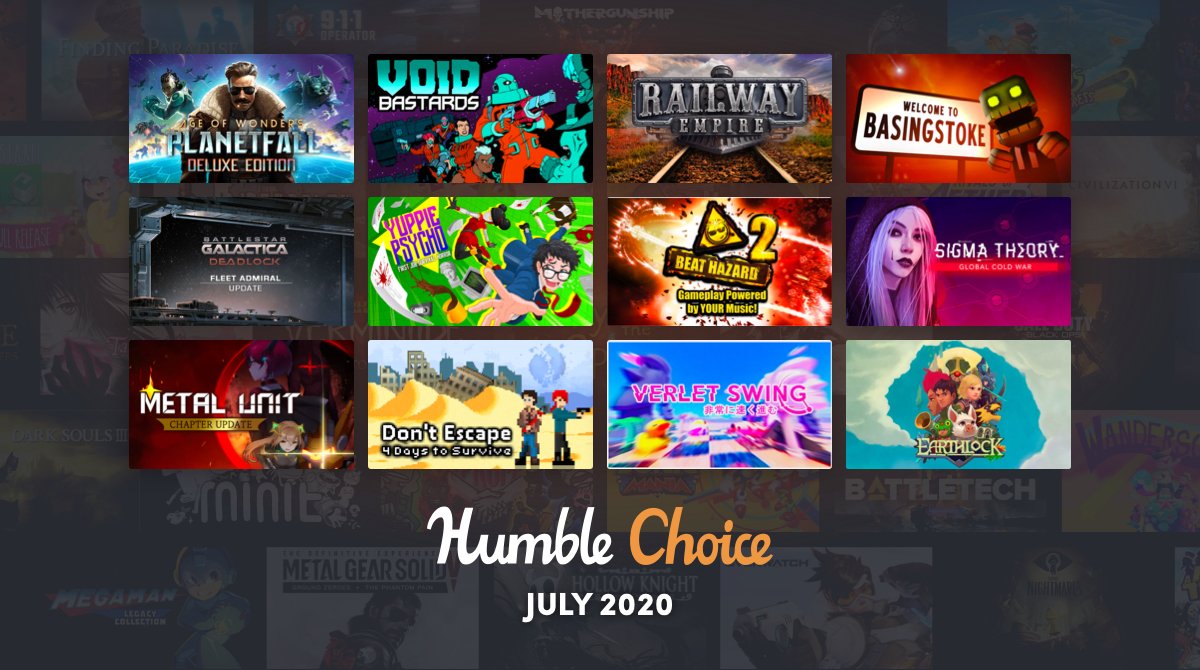 Hardcore is when the stakes are high enough to take you out of the game completely because you didn't have the skill or the patience to advance further.​

One of the best monthly in years.

Good shit. Was genuinely interested in Planetfall and Void Bastards (Though I hear Planetfall's a bit of a letdown compared to current AoW3, and I've already played some Void Bastards from game pass but I'm glad to have a copy for keeps) and the rest seems interesting. Interesting enough I'll type some garbage about them.

Railway Empire looks like it could potentially be similar to Sid Meier's Railroads, which would be nice. SM's Railroads has fun quick simplicity mixed with the simple pleasure of watching your railway grow, so if this doesn't get TOO crunchy that could be nice. Too much train-crunch and it may go over my head.
Basingstoke surprised me because I didn't realize Puppygames had made another game, I thought they were dead. Looks like Basingstoke sold like shit (Possibly because that title and image make my eyes glaze over) but after some cursory research, it sounds interesting. Roguelite stealth thing. Might be neat.
Battlestar Galactica Deadlock, know nothing about it but it's big capital ships slugging it out so I guess that's cool. The version included in here is the "Season 1" pass, so it includes a stack of DLC with it and isn't just the game itself.
Yuppie Psycho, made by the guy that did Count Lucanor, should be interesting. Stealthy adventure weirdness I assume.
Beat Hazard 2, I really enjoyed the first one but since storing music on your computer is madness I'm not sure how well this will work with streamed music. This probably would've been a skip from me if there weren't better options, but I'll try it out eventually.
Sigma Theory, had never heard of it before but it's apparently a turn based strategy game where you manage spies in a sci-fi setting and it's made by the people that did Out There, sounds like it could be neat.
Metal Unit, some anime side scrolling platformer ARPG thing, easy enough skip.
Don't Escape, apparently some post apocalyptic adventure game. Know nothing about it but random-ass adventure games I've never heard of are good pickups in bundles since occasionally there'll be something surprising.
Verlet Swing, the trailer for it on Steam made that another easy skip. Didn't even look like there was gameplay to speak of, just fucking with a grappling hook in Quake.
Earthlock, smells like JRPG which is offputting but it looks like there's a pig man so that's a plus. Would've potentially been on the chopping block but there were less appealing options.

Overall good bundle. Beat Hazard 2 might be the one I'm least enthused for and even that will probably get a look. I'm usually happy with these if I get 3 relatively solid games and this one didn't have anything that completely blew me away but almost the entirety of it sounds worth booting up and checking out.

Slitherine bundle on Fanatical, 95% off and has quite a few AGEOD games:

isn't it a multiplayer-only game who got a sequel so it's pretty much deader than dead?

MadMaxHellfire said:
isn't it a multiplayer-only game who got a sequel so it's pretty much deader than dead?
Click to expand...

It's like a Borderlands type thing iirc, always online and co-op focused but you can technically solo it. Though why you'd want to when there's a thousand true singleplayer games to play I don't know.

being "solo friendly" doesn't mean it's not multiplayer-only. and it is.

Based on one post from one guy on another forum there are players now.

Probably because they just made it free and not for long, but I'm just making assumptions here, I've no idea.

maybe they tried this as a gateway drug to division 2. oh my sweet summer child.

Nice cheap bundle with some good games like King of Dragon Pass, Shadowgrounds and Flashback.

Decent bundle, you can get AoD for a buckazoid.

Last chance to get free stuff: https://register.ubisoft.com/happyholidays2020-lastchance/en-US
You must log in or register to reply here.