Update 6: Base Building and Methane

Hello everyone, here's another update on the game.

It’s been a while, but aside from creating content, I’ve done a lot of systems development and I gave a few visual elements an overhaul.

At some point I thought I might have bitten off more than I could chew with the base building portion, but after some relentless coding, the game now features a grid-based building system and a sim-style interface. With the base building system finally done, the game’s core systems are mostly complete, which means I can devote all my attention to putting in the remaining content.

So let’s talk about the base building and operational aspect of gameplay.

In general, construction speed and quality is determined by the character’s construction skill, although the science, logistics and hacking skills occasionally play a role. I'll go through the three elements one by one.

The printing table builds items. Battery packs, tools, etc. Printing weapons is prohibited by the IASA charter, but a character with a high hacking skill can make a weapon. Items are usually constructed relatively fast and appear in the Outpost inventory when they’re done.


Base modules are heavily insulated modular rooms that can serve various purposes. Once built, your character can walk around in them. Your character will need to be there occasionally. Recruitable NPC’s, once landed, will also be working in their designated area if you assign them to a certain task. NPCs at the Outpost and the Chinese base have schedules. 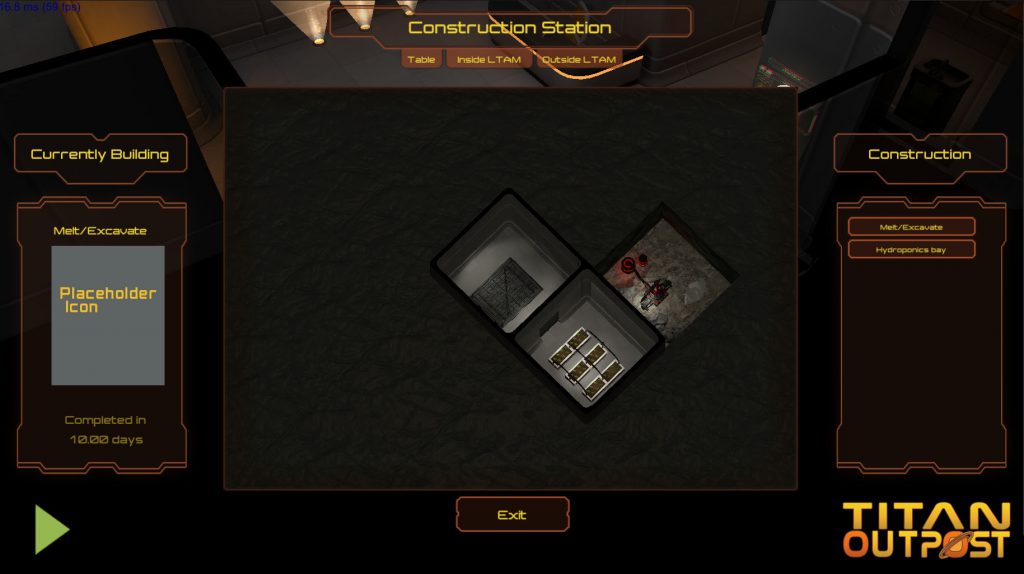 Some examples of basement rooms:

Hydroponics - Generates Food. You can import food from shipments or eventually grow enough to be self-sustainable. You need a variety of seeds to maintain biodiversity. If hydroponics is left unpowered for a while, plants die and you lose biodiversity until at some point you have get replacements from somewhere.

Recreation room - Improved Mood (This is under review. I used to have a sanity stat but it didn’t fit the setting)

Computer Room - Unheated space for hypercooled supercomputing, providing an alternative source of income. This is available after a certain questline.

Living quarters - You have two beds to start out with. If you get more people, you’ll need more beds. You can finish the game without getting more people, but most playthroughs will have more than two people living in the outpost by the end of the game.

Before you can build a room, you will have to excavate it. Excavating ice will sometimes yield special materials, depending on location and RNG luck.

The outside LTAM is a wheeled construction bot. When you arrive, it has built the Outpost proper, the methane storage facility, the space elevator anchor, two methane tanks, one drone, and 90% of a hydrokinetic pump. This bot prints all outside constructions, most of them relating to the mining operation.

LTAM 1 also has a bit of a personality and functions as an NPC with some R2-D2-inspired dialogue.

When I developed the quest where you get to drive it, I had a bit too much fun driving it around. So much so that you can now use it as a low G driving simulator to drive around your base whenever you want. I might come up with some game mechanics for this later, but it’s not a priority and not part of the core design. Right now, it’s just really fun fluff.

When you build a hydrokinetic pump, you can send a drone to place it at a suitable methane lake. A drone can ferry tanks to and from lakes. You can assign a drone to each tank for each lake, but a character with a high logistics skill can assign multiple waypoints for a drone and handle more than one tank this way. Drones are expensive, so this can add up. 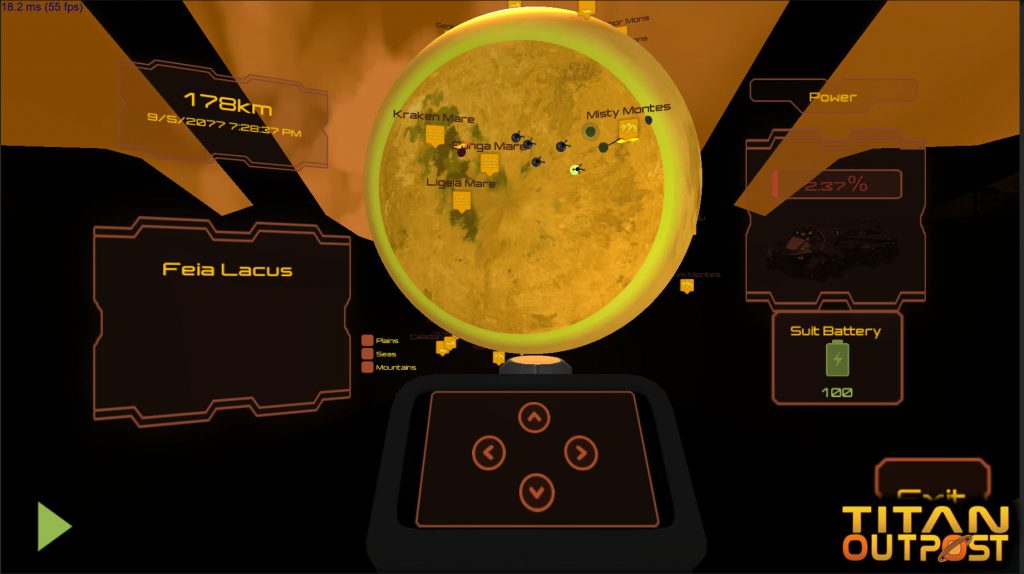 When you’ve placed a pump at a lake, you can see it floating when you visit said lake. Your character needs to physically go there by travelling in the Rover. Rover Travel is similar to Fallout’s map screen, except on a spherical map. You get random encounters, you can find areas of interest that are not yet on your map, etc. But I digress, more about travel later. 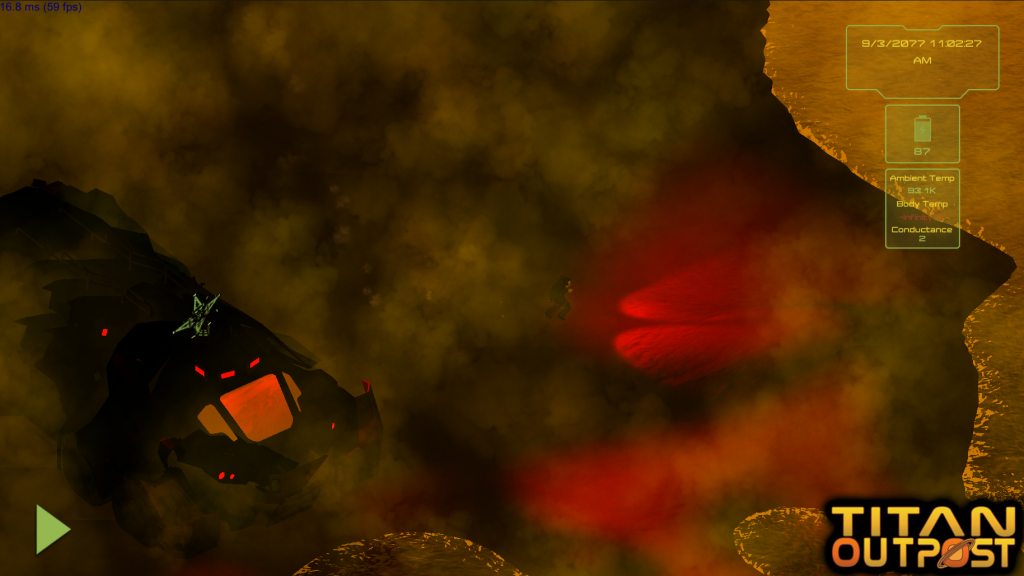 Lakes are areas you can explore, and usually you can find valuable materials -required for construction-, but only after a pump has been placed can you start setting up your mining operation there.


When you near the pump, the construction skill button pops up. When you hit it, you get to hook up the pump to the tank/drone combination system in a turn-based version of the old pipe mania/loco-motion game where you connect a pipeline/railway from a beginning to an end point. 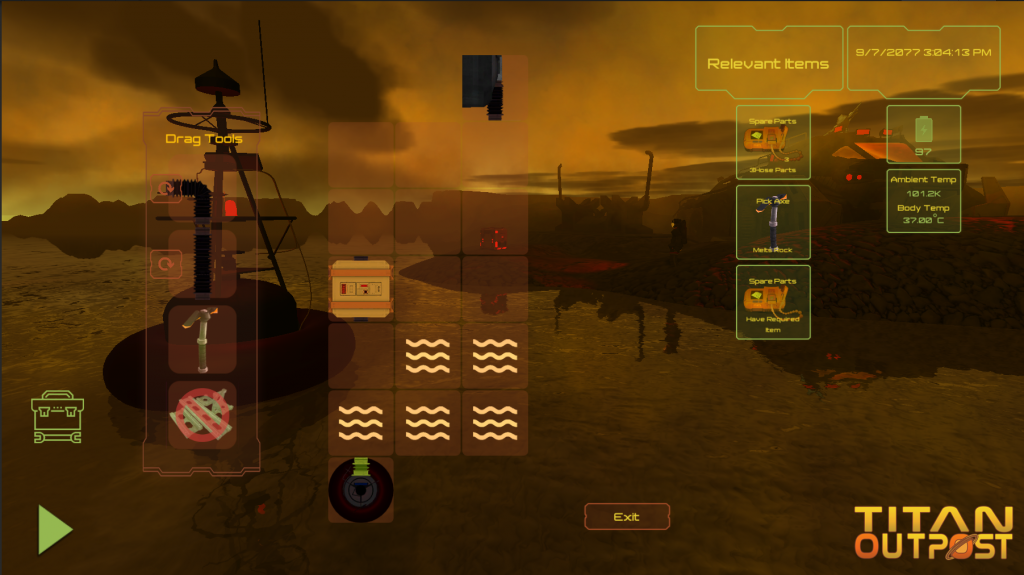 If there’s one thing I dislike, it’s random minigames in RPGs -twitchy lockpicking is a common sin- so if you’re triggered about this, let me stipulate: This is not a minigame, it’s all tied to the character system and the inventory/itemisation. Every move you make here will take time in the gameworld. Actions will require items from you character’s inventory and will make use of the character’s skills. The player is free to choose how to approach the puzzle. For example, a character with a high physical attribute might want to move a rock out of the way where a character with a high construction skill will just build around it without losing time.

Time is the currency here: Every minute spent outside drains your suit's charge.

At first, this part of the game took place in the isometric view, but after testing it for a bit, it turned out to be a lot more engaging if I abstracted it further. It’s now very obvious that it’s a pipe puzzle game, but it’s also more fun to play.

Which reminds me: To everyone who was complaining about this game not being isometric: Explorable areas switch to an orthographic 35 degree isometric view. The gameplay mechanic of walking around revolves around surface conduction: The amount of heat lost when walking depends on the surface you’re standing on. I’ll explain more about this in the next update, but exploring areas is about more than just clicking where you want to go.


Also, you might have noticed that the game looks a little better than in the video I showed last update.

I switched to a newer version of Unity. Early on in development, I built a custom shader to simulate the scattering of Titan’s atmosphere. It slowed the game down to a crawl so I abandoned the idea. I read that Unity 2017 actually supported what I wanted to do, so I upgraded. Took me quite a bit of time to restructure everything, but I think it was worth it, mostly because there are a lot of other improvements that all turned out to make development easier.

Another reason for the improved look is me applying newly learned skills to my art assets. I redid the Outpost environment, including the construction bot. The character models are now at the point where I’m actually proud of them. This game has a lot of words and, while it might not be strictly necessary to show everything, it’s still a visual medium. The tower climbing part in the first update now looks like this: 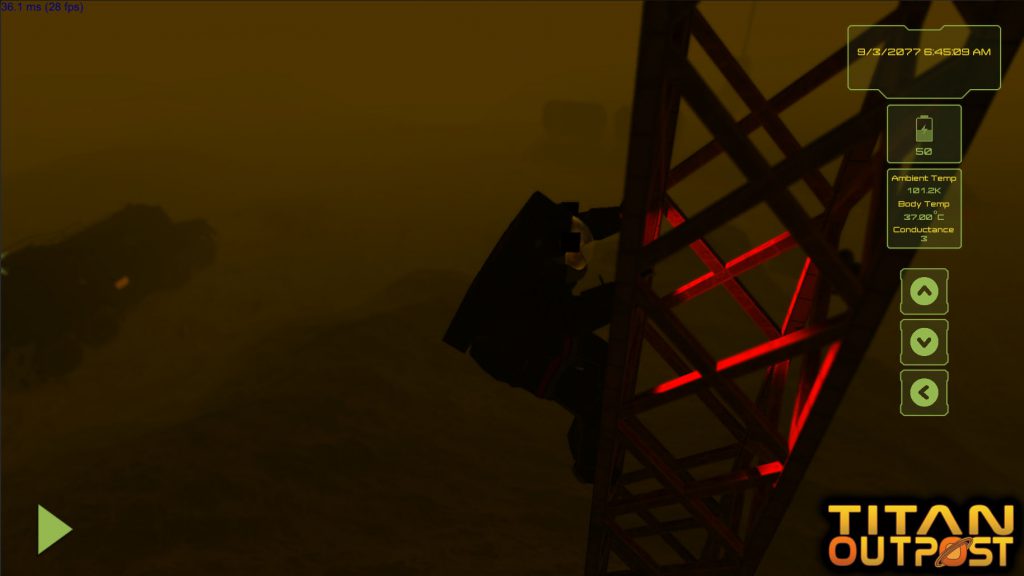 That’s it for now. I’ll go back to updating more regularly now that most of the work will be adding content. Let me know what you think, and if you have any questions, please ask away!
Last edited: May 8, 2018
Developed a hard sci-fi RPG with base building and survival elements called Titan Outpost. It's on Steam. Visit the Codex subforum and let me know what you think.

LTAM 1 also has a bit of a personality and functions as an NPC with some R2-D2-inspired dialogue.
Click to expand...


Sounds good, might want to give Silent Running a watch if you haven't seen it yet. Game is really shaping up by the looks of it, Godspeed an' all that

“It is very difficult also to sacrifice one's suffering. A man will renounce any pleasures you like but he will not give up his suffering.”
― G.I. Gurdjieff

HeatEXTEND said:
Sounds good, might want to give Silent Running a watch if you haven't seen it yet. Game is really shaping up by the looks of it, Godspeed an' all that
Click to expand...


Thanks. I have seen Silent Running. Dewey is probably a better example, but it's not a useful reference for most people. Great movie. In fact, there is an environmentalist group inspired by Freeman's fanaticism.
Developed a hard sci-fi RPG with base building and survival elements called Titan Outpost. It's on Steam. Visit the Codex subforum and let me know what you think.

MF said:
In fact, there is an environmentalist group inspired by Freeman's fanaticism.
Click to expand...

“It is very difficult also to sacrifice one's suffering. A man will renounce any pleasures you like but he will not give up his suffering.”
― G.I. Gurdjieff
You must log in or register to reply here.