Lost and forgotten (except by us)

My little brother brought his Sega Saturn to show me Enemy Zero. Problem was he was drunk and high and didn't know what he was doing. I had to watch him walk around in circles for two hours. The game didn't seem very good anyways. I'm not sure what it was supposed to be.
"Men will pay for tits until they're broke or dead." 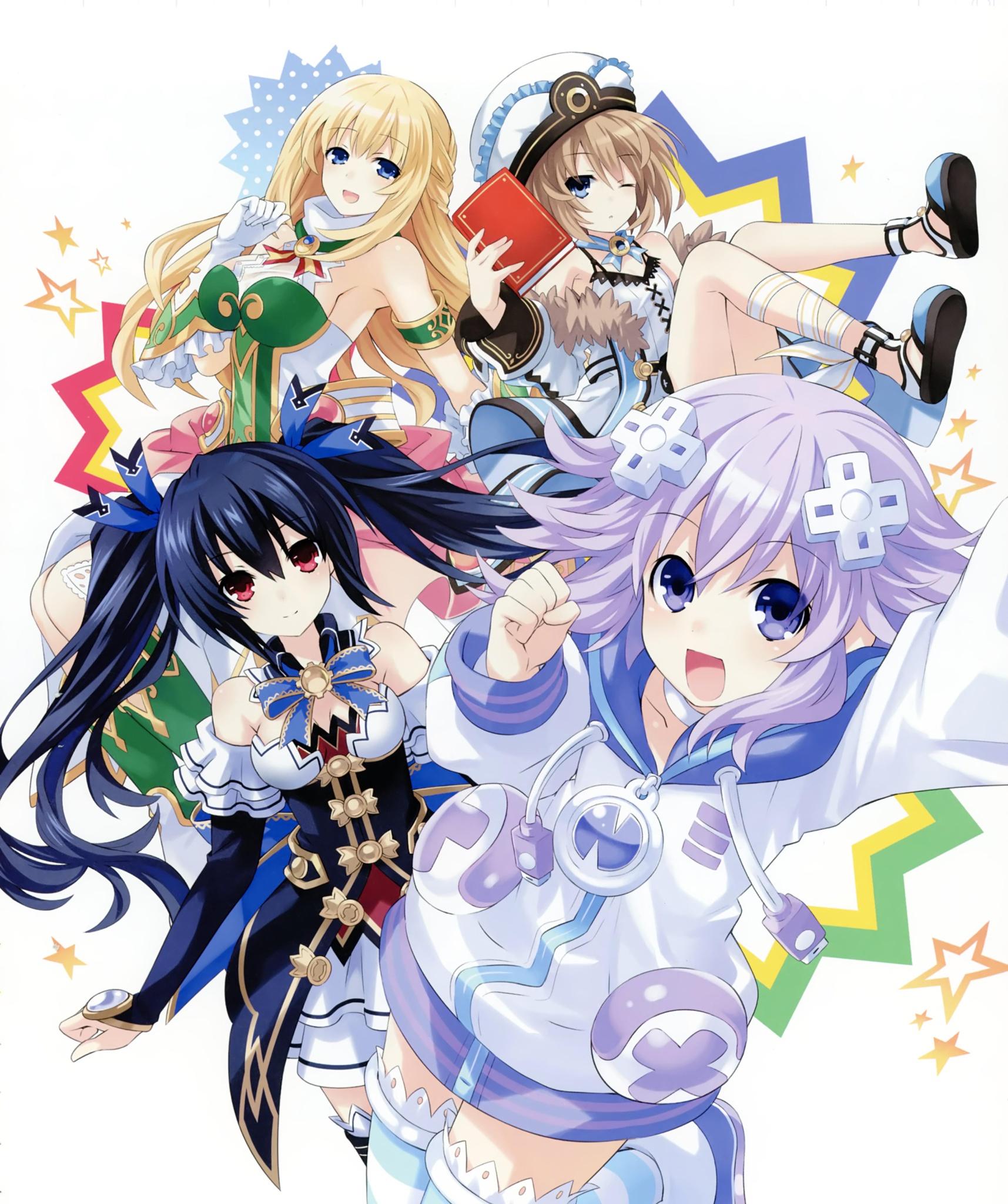 There was this neat fantasy/sci-fi card game featuring sky-ships like 10-15 years ago on Pocket PC (Windows Mobile)., Back then the "trading" card game wasn't really trading. It was just a single-player. Anyone has a gues how to find out its name? Looking it up at google, retrogaming, etc. didn't help me much.
The problem with most automatic sawblade cannons is that the saws aren't on fire.

I have this still on my hard drive, installed like 15 years ago. I've never finished it, trying to play every now and then for a bit.
The problem with most automatic sawblade cannons is that the saws aren't on fire.

I think it was this one, only in sci-fi. Maybe some DLC or something. Thanks, man. Bears nostalgia for me.
https://www.youtube.com/watch?v=K4xbIfBzcjk
Last edited: Apr 30, 2022
The problem with most automatic sawblade cannons is that the saws aren't on fire.

replayed bioforge last weekend - was as fun as i remembered it back in the 90's... such a shame they canceled the sequel:

with system shock 1 remake coming later this year, will try the enhanced edition now - a codexian bonus from the manual: 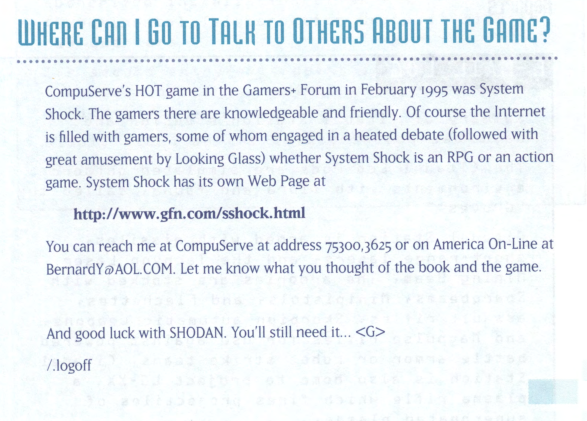 Corvinus said:
I always thought it amusing that quite a number of people are crazy or stupid beyond belief. It's like a burning trainwreck - amazing and horrifying at the same time - you can't stop looking at it even though you should. So why not share the experience? The heart of the Codex isn't cRPGs, it really is abyss gazing extraordinaire. A digital chronicle of the world going to shit as sick, evil perversity is becoming the norm. Better to see the world for what it is than avert your gaze and live in a lie, even though doing so will burn you.
Click to expand...

While I liked the game itself, what I always found the best part of Bioforge is the story. They knew their limitations and built an interesting and mysterious backstory amid the chaos that is going on as the game starts. More writers could stand to take a lesson out of Bioforge's playbook.
The shooting game addict blog.

Do we remember Shadow Vault? 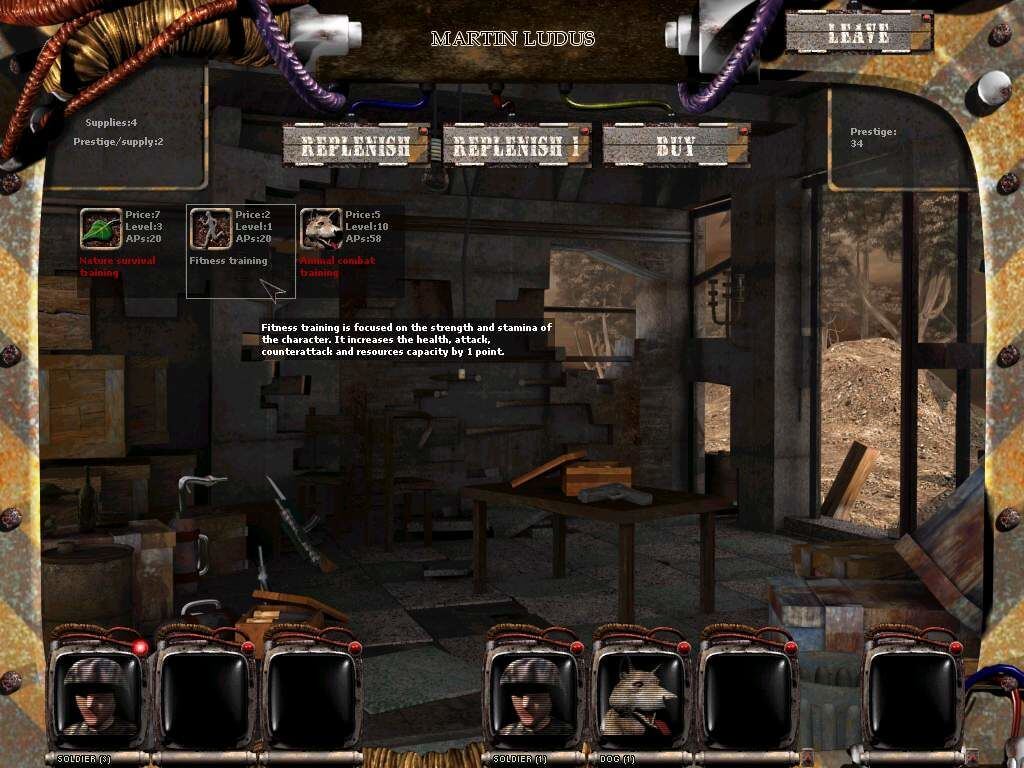 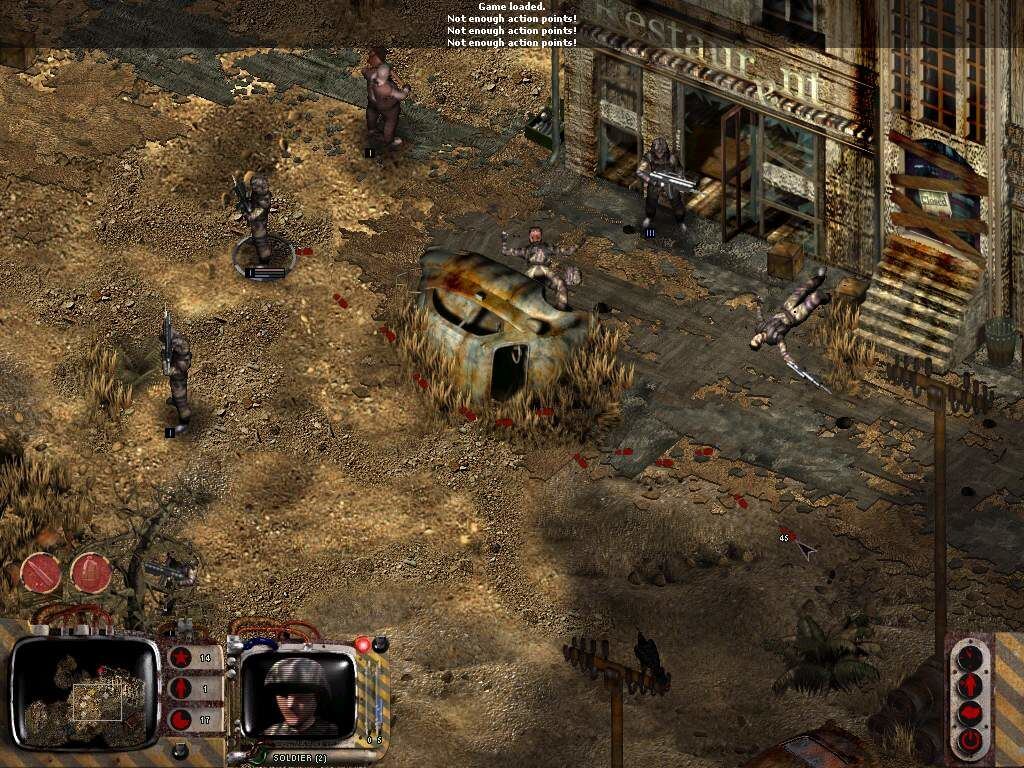 Me know this is a generalisation but why is ALL skeletons involved in evil stuff? - Ali G

I played the demo of this from some magazine demo disc in 2000. I don't recall whether it was good but it was RPGish.

Technomage is a video game released by German game developer Sunflowers. Technomage was only ever released in PAL territories.[1] It appeared on November 24, 2000 for Windows and on June 29, 2001 for the PlayStation. It was the last own production of the company, in 2002 the internal development department was dissolved. The player character, Melvin, must save the world of Gothos from destruction. The people of Gothos are split into two types, the magic using Dreamers, and the technological Steamers. Melvin is half Dreamer, half Steamer. Melvin starts in his hometown of Dreamertown, when it is attacked by monsters. He is blamed, and taken to trial to be exiled. His uncle then teaches him the "basics", pending Melvin's exile. This section serves as the tutorial stage. After this Melvin leaves Dreamertown and heads to Steamertown, on his adventure to find his father.
After passing Steamertown, Melvin enters a huge underground labyrinth called "The Hive", where his father vanished during an expedition. The Hive is a vast network built by the former rulers of Gothos. It contains grave complexes, libraries and laboratories; Melvin finds the first crystal of eternity there. When he leaves the Hive, he steps into the Great Forest, the realm of the fairies. They suffer from goblin uproars which are stopped by Melvin who then joins a pair of Shach traders on their journey to the canyon. Here, Melvin encounters Dagomar for the first time, the last survivor of the former rulers of Gothos. He acts as Melvin's mentor and guide. Also, Melvin befriends Talis, a girl who lives in exile because she also is half Dreamer, half Steamer.
After clearing the canyon's mines, they travel to the tower, the former rulers' fortress of knowledge, which is now haunted by an undead dragon. As Melvin kills the dragon, another dragon is freed who takes Melvin to the volcano, which is where the Shach traders live. In the deeper levels of the volcano's caves, Melvin discovers more artifacts and buildings from the former rulers, as well as a map which leads him, Talis and the dragon to the ancient ruins of the former capital of Gothos. Here, Dagomar drops his disguise and Melvin has to find out that Dagomar is Ramogad, the traitor who led to the downfall of the former rulers. After a big fight against Ramogad, Melvin uses the crystals of eternity found in the different regions of Gothos to reactivate both a stasis trap to stop Ramogad and a barrier device which uses a magic liquid to shield Gothos from the demon realms below. Talis then helps Melvin to escape the collapsing ruins and they fly across the ocean towards the sun.
R.

A game with a backdoor marked on a map... 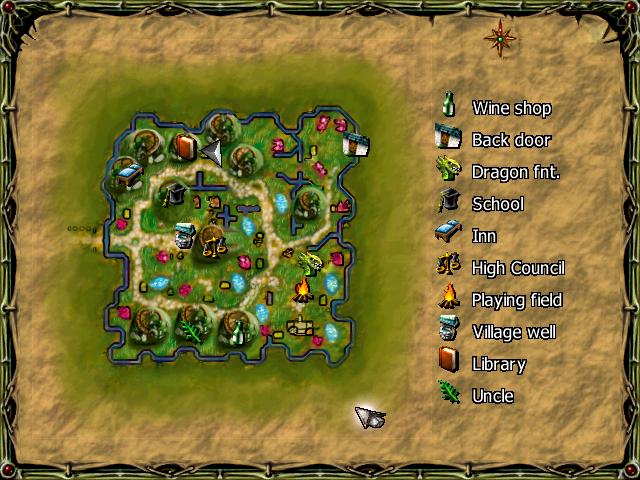 The problem with most automatic sawblade cannons is that the saws aren't on fire.

Don't know what's going on, I see the picture uploaded fine... Also, you can right click the icon, copy the http behind it and paste it into another tab... but anyway, I've uploaded the image to ImgBB. That one should prove a more reliable source. Here you go:

Last edited: Jun 5, 2022
The problem with most automatic sawblade cannons is that the saws aren't on fire.

It's simple, the site has hotlinking countermeasures.


And the music! My God it focuses my mind like a laser beam. I still stick it on if I ever need to concentrate hard on something like studying, researching projects or infiltrating and burning discords to the ground.
Click to expand...

The Img BB page too, or are you all just messing with me

?
The problem with most automatic sawblade cannons is that the saws aren't on fire.

I don't remember if it was this game or another poor quality Fallout clone of that era, but from what I've heard, its really slow and tedious.

Nikanuur said:
The Img BB page too, or are you all just messing with me

No, its just showing a link to the place you got it from. If you can reupload the image somewhere else or see if a different website has an image.
The shooting game addict blog. 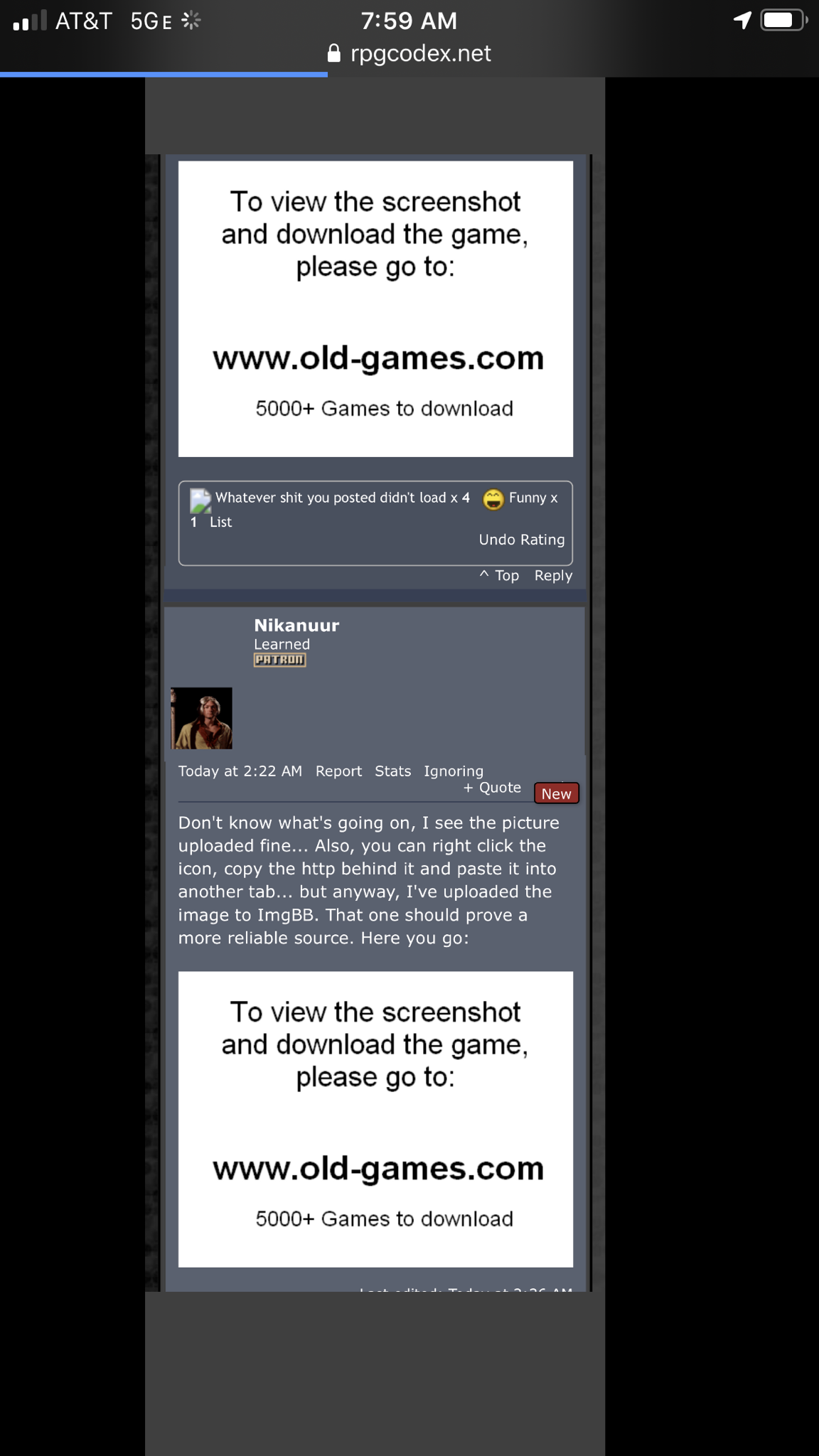 Does jpeg have some meta information? Anyway, this new upload is a pure screenshot edited and saved at Img BB. Thank you for the patience. 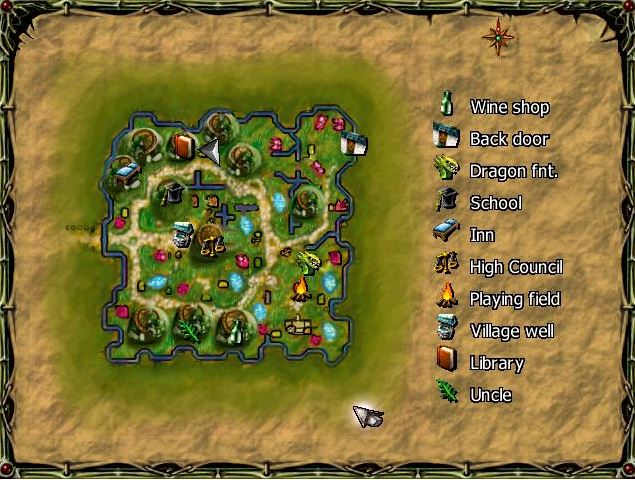 The problem with most automatic sawblade cannons is that the saws aren't on fire.

Never heard of it.

KeighnMcDeath said:
Never heard of it.

There's this horrible bug that doesn't allow you to follow up with the quest's objectives. Something like enter/exit a building, if I recall it correctly. It happens during the second or third mission or some such. It's a game-breaking bug. Now, there are these two releases of the game. One of them is patchable, the other one is not. Both are, reputedly, incomplete to some extent. Feel free to look for the right patch and the right version of the right version of the game, and you might even finish it. Other than that, the game's atmosphere is pretty solid, and the game itself is akin to Gorky 17.
The problem with most automatic sawblade cannons is that the saws aren't on fire.

At least the manual is around.
You must log in or register to reply here.