Gord said:
I'd say that if one wants to play MW right now, OpenMW is a good option. Still you are right in a way - I always think it's a bit "funny" how they still fix one or two bugs with each iteration which are somewhat major issues or deviations from vanilla behavior.

Another thing is if you absolutely need a mod which requires MWSE or relies on fancy engine hacks. Those obvioulsy won't work with OpenMW.
Click to expand...


I am not a big fan of Morrowind but best version right now to play it is still vanilla one. OpenMW still has a lot game breaking issues from outright spells not working correctly to script failures which often can happen when you don't notice it and you "uncover" shit doesn't work like it should hours into game.

I mean just 0.42 version fixed followers bug which basically brakes all quests in which people follow your character when you try to sleep.

Still, it's considered (in principle at least) fully playable as far as the MQ goes. So it's not all bad.
3. You must know how to properly operate a moped.

When I played Morrowind, which was maybe a year ago, I started with vanilla before moving to OpenMW. I preferred OpenMW despite it's flaws. It was much more stable overall.

Old One said:
When I played Morrowind, which was maybe a year ago, I started with vanilla before moving to OpenMW. I preferred OpenMW despite it's flaws. It was much more stable overall.
Click to expand...


Did you use Morrowind Code Patch with vanilla? It should make the game rock solid stability wise.

Average Manatee said:
Did you use Morrowind Code Patch with vanilla? It should make the game rock solid stability wise.
Click to expand...

I did. I tried a lot of different stuff to improve the stability, but I kept getting crashes. Certain areas were worse than others. What's the name of that city on the lake with all the step pyramids? That's the one that made me give up on vanilla.

OpenMW wasn't perfect by any means. In fact when I started using it they hadn't implemented (or re-implemented) shadows yet, so it looked a little strange, but at least I could walk around in the towns without worrying that the game would suddenly crash for no reason.

Must be some kind of system-dependent issue, I played Morrowind with it a few years back and was fairly amazed by how stable it was. Easily several hours between crashes.

Sounds like the project is in trouble judging by the 0.42 OpenCS release video. The guy went on for over a minute about how they're in desperate need of developers and the how the lack of developers is the reason why progress has been so slow.

Alexios said:
Sounds like the project is in trouble judging by the 0.42 OpenCS release video. The guy went on for over a minute about how they're in desperate need of developers and the how the lack of developers is the reason why progress has been so slow.
Click to expand...

I wouldn't be so pessimistic. This is probably the most successful from-the-ground-up engine recreation project. It's absolutely mind blowing that they managed to carefully recreate such a complex game. It's 95% complete and open source, so I wouldn't worry about it.

The fact that mods are so well supported is amazing. Given all the quirks of the morrowind engine and scripting it sounds like a PITA to code.


Alexios said:
Sounds like the project is in trouble judging by the 0.42 OpenCS release video. The guy went on for over a minute about how they're in desperate need of developers and the how the lack of developers is the reason why progress has been so slow.
Click to expand...


More likely he's just getting a hundred emails a day demanding to know when it will be finished and wants to tell people to not annoy him unless they are ready to contribute.

Seems like the attention TES3 MP has been getting is helping the development process for Open MW. Also, OpenMW 0.43 is coming out fairly soon since the last release was delayed:

It has been slightly over a month since the release of OpenMW 0.42.0. If you look back to when 0.41.0 was released, you’ll see that it took us 8 months to deliver the new version, making it perhaps one of the lengthiest releases in our history, yet in its size it isn’t that different from preceding versions.

That is not to say that OpenMW developers have been slacking off, however. Or that during the course of those 8 months we had much less progress. The reason for this delay was that our video editor’s computer broke down at a rather unfortunate and inconvenient time. When discussing whether the release should done without including a video, the decision was made that we would halt the release process until hardware issues were solved. After all, if anyone wants to play the up to date version of OpenMW, they needn’t wait for the release because they can use our nightlies, which we have recently made more visible by including them in the downloads page.

The good news is that while the release process was in limbo, work on the next version had already started and by the end of it had reached a point where we almost had enough to release version 0.43.0 the day after 0.42.0. At the time of this writing, we are sitting at 85 closed issues, making this release already larger than the previous. Check out the bugtracker for more detail.

A little more than a month ago we also saw the release of TES3MP version 0.6.0 and more recently a stability patch 0.6.1, with the next version possibly landing very soon at mid-September. Since TES3MP is built upon the OpenMW engine, we received part of the media attention and had a burst of new developer applications afterwards.

With new people on the board, there has been increased increased interest in improving our code documentation. One of our new coders is looking into possibly extending the .OSG animations or making it possible for OpenMW to read more than just Morrowind’s version of .nif files. Scrawl has released his incomplete experiments with shadows and an old member by the name of AnyOldName3 is trying to get them working, though he urges me to include that there’s no guarantee he’ll succeed. In addition, we’ve had the return of Aeslywinn, who in the past did some great work on OpenMW-CS and is back to continue where he left off.

A new feature of his that’s already been merged with OpenMW gives modders the comfort of being able to reload assets in OpenMW-CS without having to close and re-open the program. His next undertaking seems to be land records, which would be a step towards being able to edit landscape, the main missing feature in OpenMW-CS.

While we have enough issues closed to produce a rather sizable release, no call for the release process to start has been made yet. After all, we just released 0.42.0 only a brief time ago. It is likely that the upcoming version will be bigger than usual and will arrive in about two months, with the mentioned land records and other features currently being worked on possibly included. Overall, areas that remained stagnant a few months ago are now getting visible development and things are looking good for the OpenMW project.
Click to expand...

I still don't understand what's the point of using OpenMW now considering that 1) I get good framerate and 2) I got exactly 2 CTDs in 3 years. What I really want to know is, does the OpenMW engine renders meshes differently, i.e. does it draw everything like the old engine, or just the meshes that are visible? Becasue that would be an improvement.

In 25 years you'll be able to play morrowind on your holosuite thanks to nerds porting this.
Bernie sanders is about to make you his bitch.

Drax said:
In 25 years you'll be able to play morrowind on your holosuite thanks to nerds porting this.
Click to expand...

Still no shadows though...when is that coming, I wonder?

Not that I'm complaining.

a cut of domestic sheep prime


He just keeps talking and talking in these incredibly broken sentences, moving from topic to topic, it is really quite hypnotic...
Last edited by a moderator: Dec 6, 2017

OpenMW is about the only game(engine) where I get significantly better performance on Linux than on Windows.
3. You must know how to properly operate a moped.

Since I didn't found thread dedicated to Morrowind, I'll put it here.


I guess because issues aren't features? And new features (the features from MW which aren't yet implemented in OpenMW) probably bring more issues.


As opposed to what number?
They follow the convention of simply increasing the count by one with each major version, there's no meaning like "percentage completed" or anything attached to it.

Besides, the project is in the habbit of revealing that somewhat basic behaviour has only been implemented/fixed in the most recent version - like e.g. the drowned NPC issue fixed in 0.43.
So, while you can finish the game and expansions with OpenMW for some time now, don't expect everything to work already, even though it's not mentioned very prominently.
Last edited: Dec 9, 2017
3. You must know how to properly operate a moped.

There are three micro-issues remaining, and we all know what that means.

Last edited: Dec 9, 2017
Longing for the days when men were men and RPGs were RPGs
Return to Chaos emulator for Dungeon Master and Chaos Strikes Back
The Faery Tale Adventure with proper configuration

Yeah. Release Date: Next Thursday.
What is RPG in a bulletpoint of 12 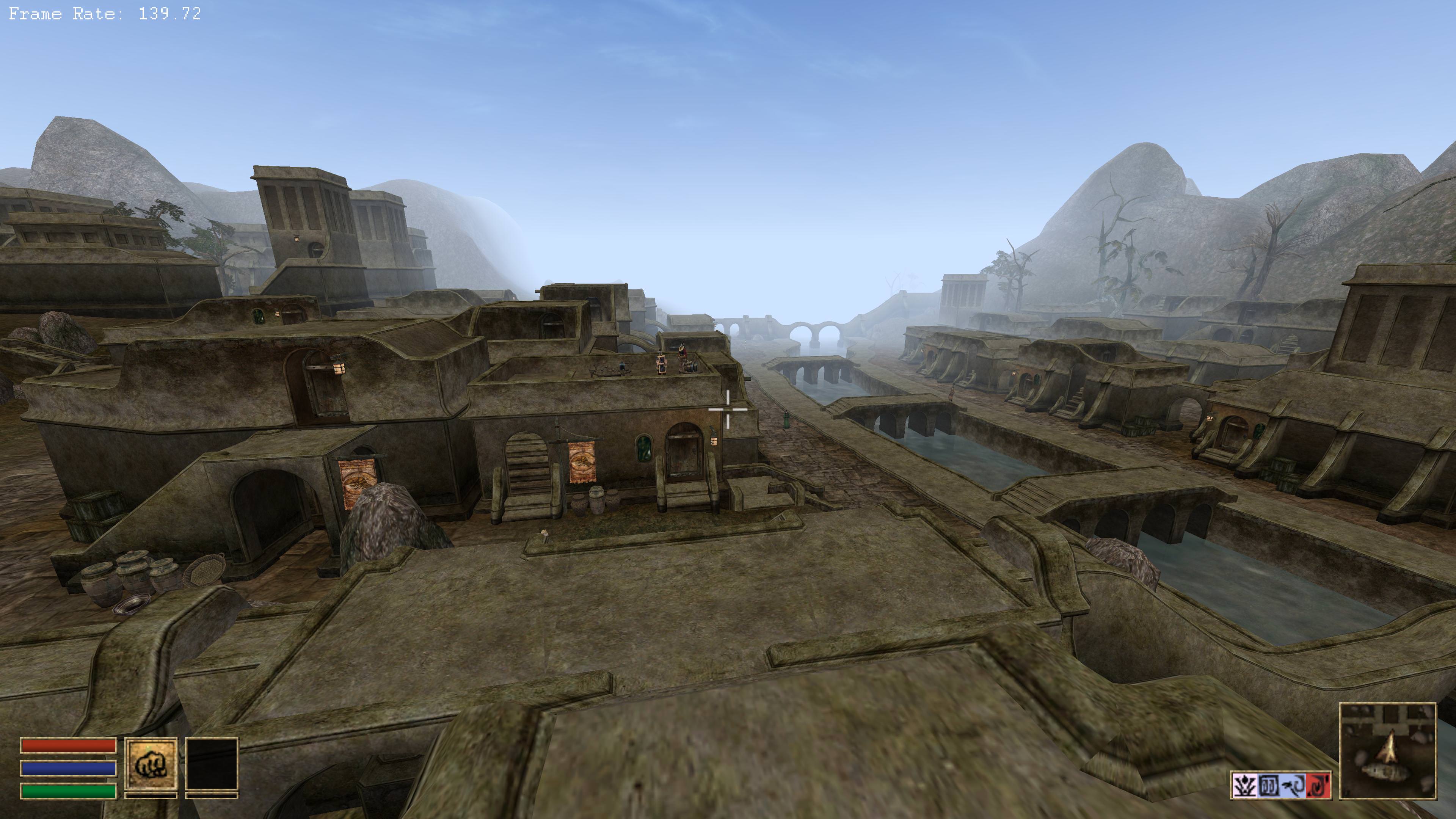 So its better to play now openmw or regular one ?

OpenMW as far as I'm concerned, but not everything is implemented yet. For example, most mods work, but a few popular ones do not.
You must log in or register to reply here.