Hm, let's say I gave dem some honest feedback about how the staff members behave since few months, letting their site literraly decline. I was invited to make my own introspection while one moderator insulted the codex as "some elitist people", when I answered him codex is just exigent in cRPG matters.

Of course he erased his post and mine too where I was just asking if they lost their flame, why they didn't participe any more in the life of the site excepted for some shitty & mainstream news, while lesser projects didn't have any cover anymore (hello TNW), as if the site will turn as a specialized translation site, since the most active staff member has also build his own translator team which seems to be very effective and motivated (not a bad thing though, but still, it's strange he's the most active staff member here). Of course, it's a work I salute.
It was a simple warning, and two bros who did approve my post before its deletion were expelled along with me.For that, I'm sad for them.
The most fun thing is that this particular translator implied that the grass behind the curtain wasn't as green as one could think (before he auto-censored).Something tells me he will move from there in not a so long time.
So, after more than 10 years of serving, I took a backstab and a permadeath here. BTW, I'm particulary proud for having given Vince its own portal here in the dedicated forum section along with majors title. At least, I could give ITS a well deserved promotion. But now, it's over.

And, I can also tell you, concerning the Dex, that they don't hesitate to consult this "elitist place" when it a matter to post news. I can't remember how many times I gave them some infos, but without any thanks. Only for the last one I was given thanks, concerning Realms Beyond, when Peter directly PMed me to let me know about the rebirth of Chaos Chronicles. Not a real problem, but at least, it shows the state of spirit of their conductors. Another bro asked them if they will allow him to post a review, they didn't answered him, ignoring him. What a professionalism !
So, I would say this RPGF is now in decline until he totally sink.
So, it's time to turn over a new leaf, and to move at Loutrage, an emerging site composed by former RPGF members. The forum is still under construct; but when it will be open, I will have the freedom to speak about Realms Beyond, ITS and other lesser projects there that RPGF no longer want to speak of.
Time is not counted from daylight but from Midnite

Yeah, it's your fault if i'm ban too !
In fact, support you was only a part of the reasons i'm ban, but it's a good thing, because i finaly come here.
I simply hope that if i make criticisms of a game someone like, he will not be content to complain and will have arguments other than "you're a frustrated white man", with the support of the moderators as a bonus ^^

Location
It's Kitten Time at the GreatCrystalShrine

We were banned for no reason. Who cares? SJW Crusaders don't need any reason to ban you. And you can stick the right of reply up your ass.

J_C
What can you tell us about it? Unless you're Matt Burton.
Click to expand...

Not much, since I don't buy the magazine for a long time now, neither I work there. They got AoD as a bonus game this month, that's all. I read the article of the game on their site, and it was very positive. The guy who reviewed it totally appriciated the game.
My games on Steam: Exile Squadron - A Long Road Home - Rolling Arcade

On the occasion of GOG wishlist promo games such as Ghost of a Tale and Age of Decadence have also been mentioned. This is what they said about AoD (something along those lines anyway):

RPG's connoisseurs will also be interested in Age of Decadence (-66%), which is an incredibly ambitious and difficult game. You will not find grandiose graphic effects in it, instead you'll enjoy the game over a dozen times and each time the history and gameplay will be different.
Click to expand...

Meanwhile, on the steam AoD community...

Fanboys of this game
Maybe someone can explain this to me.
I have written several reviews on Steam about various games, both negative and positive.
Usually they get a few votes, so I think at least some people go through a few reviews before buying a game.
Click to expand...


Some attitude problem over here.


Goral said:
Why are you crying here? Oh, right, because of your IQ.

Your review has lies, untrue insinuations and inaccuracies and you're butthurt that the game isn't easy and that it's ugly even though you're claiming that you like hard games and don't care about graphics.
Click to expand...

xD
Roguey said: "Most RPGs only offer the illusion of strategic gameplay because most people can't stand the idea of being unable to progress because they made a series of less-than-optimal decisions over time that added up".

Goral keep it up man.

ERYFKRAD said:
Goral keep it up man.
Click to expand...

I forgot the link. https://steamcommunity.com/app/230070/discussions/0/1698293703769034331/
Roguey said: "Most RPGs only offer the illusion of strategic gameplay because most people can't stand the idea of being unable to progress because they made a series of less-than-optimal decisions over time that added up".

Wow, 1st char- hybrid, and then he goes thief with combat char.

It sounds like he was expecting a Skyrim-style game, didn't pay attention to dialogue and didn't like the fact that there are consequences for stat allocation and dialogue decisions.
Mods: Shadowrun DF & HK enemies attack with >1 AP // Silent Storm fix'd and in Widescreen // MechCommander Gold in Widescreen
Resources: Fallout 1 patch guide // Play Fallout 1 & 2 without ruining them // Proper way to play old games
"When you examine something for too long, it's possible to find a flaw in every single aspect of it. What has in fact happened is that you have flawed your own eyes through the exercise." -Tigranes

EDIT: I must say I'm quite surprised by the reaction of the raging fanboys of this excuse of a game, both here and in the relevant forum.
After a brief scanning of other rieviews and threads, I noticed it's quite a common practice in this (fortunately small) community. The slightest form of criticism is answered with a barrage of insults and salty replies filled with rage and blind fanboy-ism.
Not really a surprise. Bad games tend to attract bad communities and this one seems to be made of teenage edgelords raging about their favorite band. Quite fitting, I must say.


EDIT 2: two weeks after this review, I'm still getting notifications of random ♥♥♥♥♥♥♥ commenting with insults. I'm not getting into another debate about this trash game, so I'll just delete any offensive comment. Zero effort for maximum fanboys saltyness.
Click to expand...

I could swear we had a poster in the Codex with this nick, Shizu.
Roguey said: "Most RPGs only offer the illusion of strategic gameplay because most people can't stand the idea of being unable to progress because they made a series of less-than-optimal decisions over time that added up".

I know this isn't right thread, but... Is it me or now Skill Points are way more common? 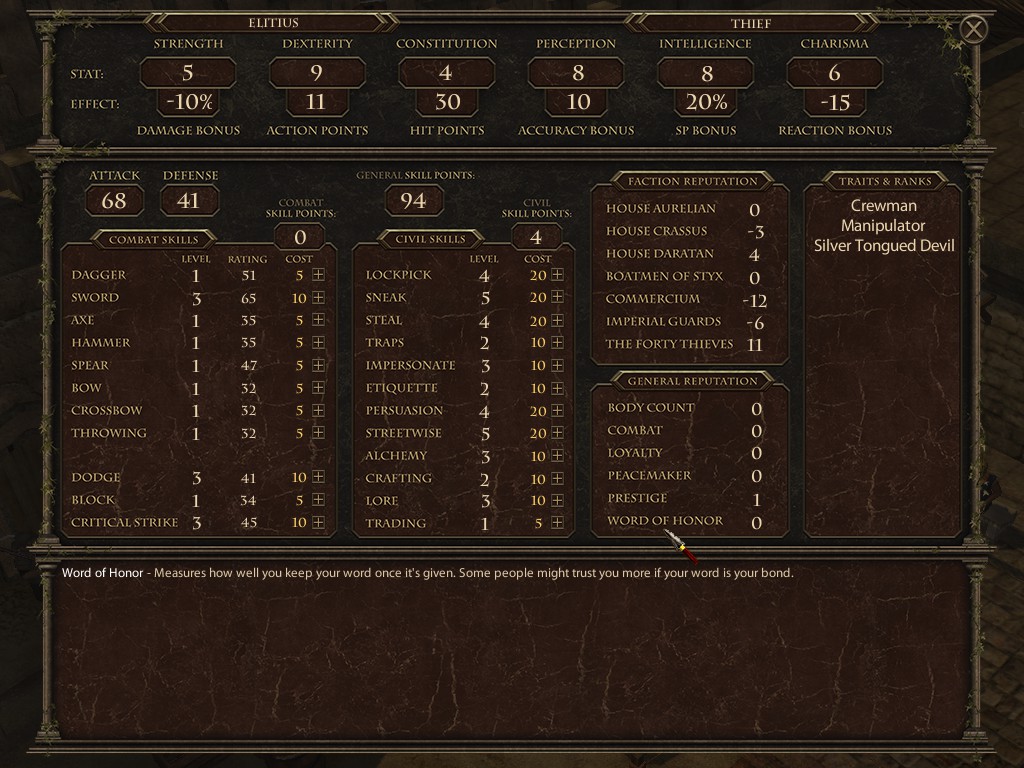 Brozouf aint free, the cycles of guilt have to be littered with the broken legs of the unworthy. Mentor may or may not be my mentor, he may or may not be dead and is probably a filfthy Jian as well. Culter and OK legs not Jian and Fatal Wounds ok? Praise guilt.

There were no changes to skill points in 2 years.
Spazmo: Odds are, something you like very much sucks. Why? Because this is RPG Codex.

You're playing a thief, right? That's the class/story path where I ended up with by far the most skill points, so that's normal.
༼ つ ◕_◕ ༽つ ʕ ͡·ᴥ ͡· ʔ

Yeah, I recently did a similar playthrough.
Here's my leaving-teron-save stats: 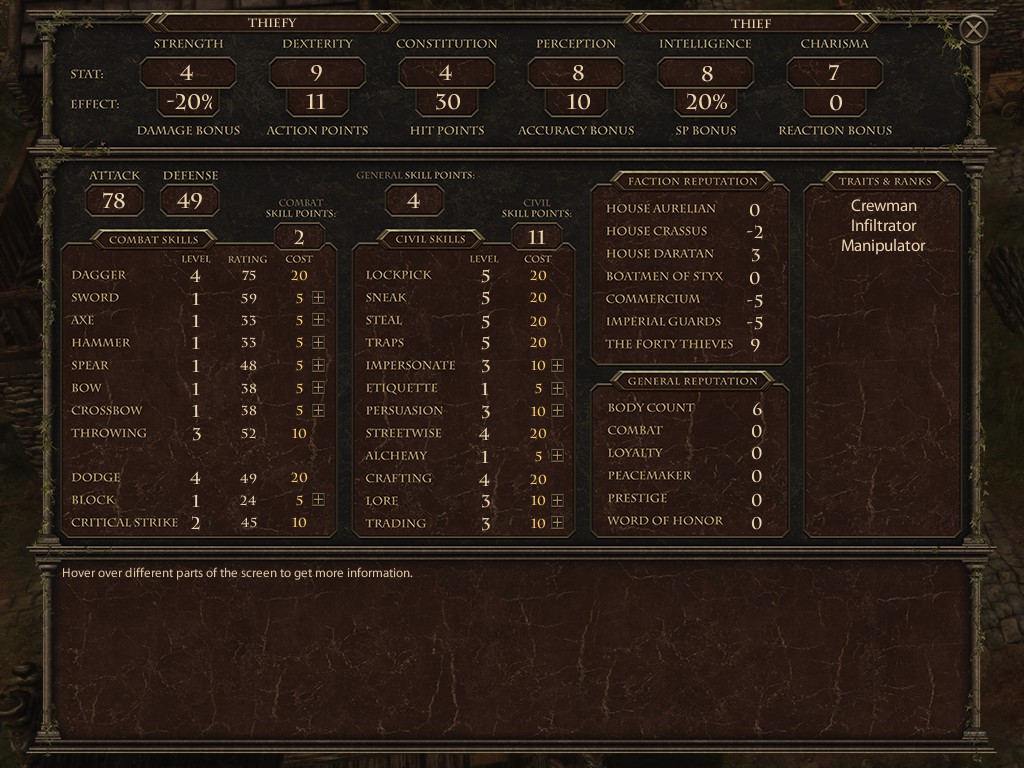 Did everything peacefully until it was time to leave, then pumped points in offensive skills to take out the guys next to the tavern so I could scrounge enough SP to kill Militiades' thugs. 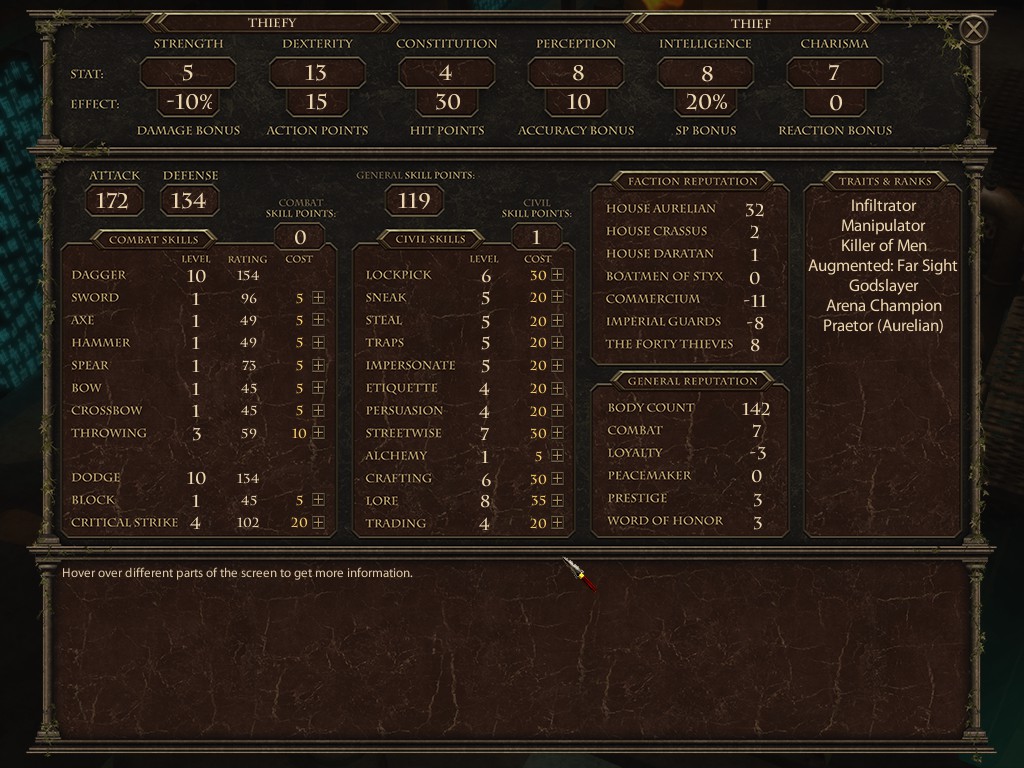 Could probably have done without Steal and most of the points in Traps though (don't think you need 5 to get the scroll during the palace infiltration in Teron). Also didn't use crafting for any actual crafting of armor or weapons beyond Teron.
Etiquette and trading was purely from training and not really used. Impersonate was just for the prophet in ganezzar.
Skipped out on some of the harder fights like the thugs in the Slums blocking the way to the Temple and the Demon in the tower.
Killed Thoragoth, but think I only did it using the serum and bolas.
Last edited: Jun 16, 2019

Norfleet said:
Incline is a myth. The very notion of it violates the laws of thermodynamics. Net Entropy always increases. Any appearance of incline is always matched by greater decline.
Click to expand...