Reporting Issues
Supplement the description of your issue with the following information to facilitate a swift resolution of your problem!

Please send files to templeplushelp@gmail.com or upload them to a file-hosting service such as wikisend.com.

Sending savegames:
The files are located in your ToEE folder, under modules\ToEE\Save\.
Make sure to include all the relevant files! Example:

Click here for detailed instructions:
Supported Configurations
Temple+ aims to support the following ToEE versions:
However, it should be noted that most of the testing has been conducted with the Co8 mod. Personally I recommend it because it also fixes a lot of bugs, and the Standard edition is reasonably free of new fanmade content if that bothers you.

You can safely load and continue playing savegames made without Temple+. The opposite is not true.

Supported operating systems
Hardware requirements
We're not sure of the exact minimum, but your GPU should at least support Pixel Shader 3.0. This is not a guarantee however, as some users reported being unable to run with NVidia GT9600m and GTS 250.
If yours does not, you can try using an older version of Temple.

Supporterd Resolutions
Up to 1920x1200 has been confirmed ok.
4K resolution will cause the game to crash.
Resolutions in between have not been tested yet.

Updates
The game checks for updates while in the main menu. It will automatically download & install them in the background.

You then have to restart your game for it to take effect. 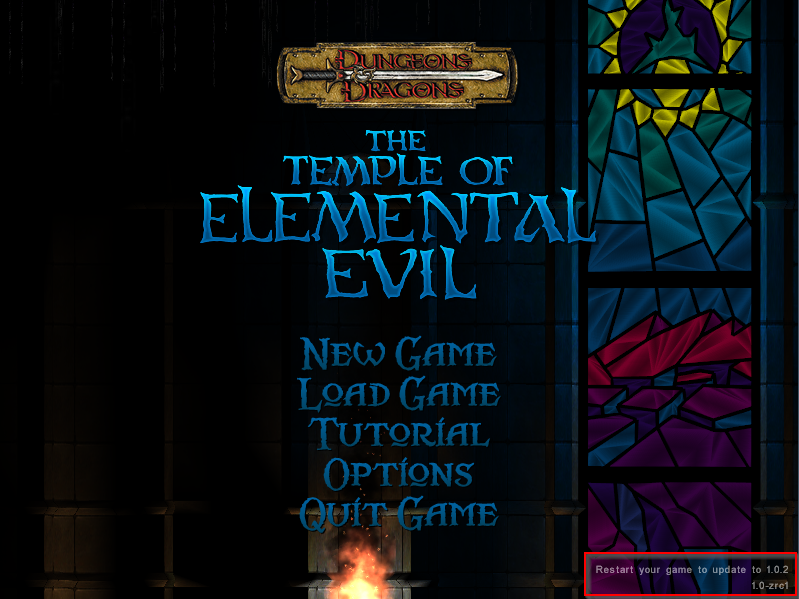 See issue tracker. And this thread of course

Code:
It also speeds up your running speed according to speedup.ini.
Testing Archive

At some point the "most xp from 1 combat" stats have gone awol: http://www.allcutt.me.uk/templeplus/most_xp.png - fighting new combats doesn't make it come back.

The creatures killed roster still seems to be fully populated.

My Lamia summoned from figurine has somehow permanently charmed a human temple guard. The guy is invisible and does nothing. How can I remove him?

Dumb Assassins and PrC Casters Miss Out On Spells
I'm allowed to enter Assassin as a character with less than 11 INT. (Maybe it's lax rules.) Doing so means things work as normal until the Spells area. He can learn no spells that level.

However, if the character gains INT so he would be able to cast spells of the appropriate level, his spell picks are not retroactive. Thus, if a character goes Assassin2 with 10 INT then Assassin3 with 14 INT, he gets 2 spell picks of level 2, but never learns the level 1 spells he would have gained from Assassin1 & 2.

Also my magic domain cleric 6 / fighter 1 casts lvl 5 shield scroll with a duration of 50, so it's actually not being cast at half level.

And finally (while not being directly temple+ related), ghoul touch doesn't allow a save for it's paralysis effect. This seems like a rules misinterpretation to me. Being able to paralyze a hill giant with fort +15 no save seems kinda op for a lvl 2 spell that doesn't even care what your caster level is.
Fixed v1.0.43
Last edited by a moderator: Jul 14, 2017

I uninstall everything, then re install Toee and co8, then run the dev build and the Practised Spellcaster appear.

How do I attach files? I just got a crash trying to cast mordenkainen's sword and I can't figure out how to attach the saves and dump and stuff
Here's the log though

Deleted the log transcript from the discussion because it was breaking the page. I still have it though if someone will tell me hoe to attach it properly
Last edited: Jun 24, 2018

Trolls and Hill Giants, when made as new characters, don't display their level adjustment in their racial stat area. (For example, a Hill Giant says it gets +14 STR, -2 DEX, etc. but no mention of LA.)
Fixed v1.0.65

I'm unsure if you included racial HD for these races, but the initial character creation interface didn't allow picking of feats and skills as if the creature had more than 1 total HD.
Last edited by a moderator: Feb 17, 2019

-I can't use DM mode in full screen mode since I can't scroll far enough to the left to click on the DM tabs (Fudge Rolls, etc.)

-(Co8) Burne still has a modified scroll of suggestion in his starting inventory, but it was merely renamed dominate monster (and can't be added to a Wizard's repertoire) and the real dominate monster is a separate spell, seemingly with a separate entry, and each can be learned, though, again, only one spell is 'real.'

-(Co8) Expressing hostility toward the initial shop's 'Game Portal' causes the game to softlock due to combat. (I tested this with grease by accident.)

-Unlike previously reported, a Favored Soul's Weapon Focus, Weapon Specialization, etc. DO work as prereqs for other things. Good job implementing that!

-Creatures of the Giant type (like Trolls and Hill Giants) should be proficient with all Simple and Martial Weapons and with some armor. This is currently untrue.
Fixed v1.0.69

-LE Intro: Before talking to any of the Hextorites, starting a fight with them (with winning optional) doesn't automatically move the group to Hommlet like with the TN and LN intros.
Last edited by a moderator: Feb 21, 2019

I've cleared out the Moathouse and Brother Smyth has given me the quest to open his chest and while the chest appears, I can't interact with it at all. I've tried reloading, switching areas, and turning it off and on again but it remains unclickable. I'm running 1.0.66 and I've uploaded the save and logs to here:

ImANarc said:
I've cleared out the Moathouse and Brother Smyth has given me the quest to open his chest and while the chest appears, I can't interact with it at all. I've tried reloading, switching areas, and turning it off and on again but it remains unclickable. I'm running 1.0.66 and I've uploaded the save and logs to here:

Strange. I'll have to investigate how that happened, but in the meantime you can fix this by using the console (bring it up by pressing shift + ~).

Select a character, make it stand next to the chest and type:

Duergar (1.0.73):
-Automatically proficient with Dwarven War Axe. Should only treat it as martial.

Location
Trapped in a bioform

Not sure where to report this bug, but I generated a duregar PC and when viewing him in the list of characters to add to my party, as well as viewing his character information screen, his race was denoted as "Dwarf". Shouldn't there be different texts to display for the character race for the new playable races instead?
https://ichef.bbci.co.uk/wwfeatures/wm/live/624_351/images/live/p0/2l/m4/p02lm4s1.jpg

normal size Rapier lacks the tag to use it with little people weapon finesse, all little people rogues are sad. glad it was done away with in later versions of the rules. Ive found one tiny weapon halfway through the game.

I just did the battle against the Balor Guardian in the Fire Node. Strange thing was that the 12th level Paladin was affected by Fear for most of the encounter. Will send a save file. Two PCs died in the battle as a result.

I 'm forwarding some issues that have been sent to me:

Attaching files (dmp, log and the latest savegame used before the crash)
http://wikisend.com/download/946164
-Enlarge person seems to stack with righteous might
-All rods list Craft Magic Arms and Armor in their prerequisites [EDIT: I checked it myself and it's actually not a bug]
-Potions can target other concious characters. Legal targets are supposed to be the user (standard action) or unconcious creatures (full round actions) [EDIT: I just realized it's intentional. Here is some good rationale behind the idea]

Thanks for the recent updates!

Dr. Bak said:
I 'm forwarding some issues that have been sent to me:

Attaching files (dmp, log and the latest savegame used before the crash)
http://wikisend.com/download/946164
-Enlarge person seems to stack with righteous might
-All rods list Craft Magic Arms and Armor in their prerequisites
-Potions can target other concious characters. Legal targets are supposed to be the user (standard action) or unconcious creatures (full round actions)

Thanks for the recent updates!


I'm afraid the files got lost in the shuffle... do you still have them perchance?
Temple+
ToEE engine enhancement mod | Modding Wiki​

Rogue special abilities (Improved Evasion, Crippling Strike, etc.) should list Rogue10 as a prereq instead of none.

I am using temple+ 1.0.84. I have read under the Co8 page that looting after the drinking contest is a problem. When I first went through using 1.0.84, I could only loot Kobort of the 4 contest participants. Since then, I can loot all of them. I have no idea what changed. Maybe this could help. The first time, when you tried to loot the other 3, you got dialog instead of their items.

I have defeated Zuggtmoy...The problem I found was that I entered the interdicted level...Killed the fungi in the room...Walked around where Zuggtmoy shows up and the entire map was shown...I then left and came back and the map was hidden in a couple of places where I had already walked. I am using the default screen size for my computer (1900 by 1080), Temple+ 1.0.84, and Co8 8.1.0. I think it did the same thing just before the Zuggtmoy fight but I haven't gone back to see if that is true...I am in Verbobonc now.

Practiced Spellcaster (Divine) on a multiclass Cleric also gives domain bonus spell slots but no higher level spells. (Thus, a Cleric1/Wizard8 with Practiced Spellcaster (Divine) has level 1-3 domain slots due to the feat but only level 1 domain spells known.) Since domain spells are divine spells, I was disappointed when I couldn't use this trick for early entry into Mystic Theurge (Cleric1/arcane caster 3 or 4/MT afterward). There was
Fixed 1.0.85 (i.e. will no longer get the domain slots)

Domain spells also seemingly don't work with metamagic. I tried applying Extend Spell to a domain spell and got a blank space with a "+Apply Metamagic" effect.

Sitra Achara said:
Now that's a strange one. It's related to Burne's inventory - for some reason it's all null.
Do you happen to know if there was any history with Burne, such as taking him on an adventure?
I guess I can fix the crash itself by treating the symptom, but I'd like to know how that came to be in the first place...
Click to expand...


I can't tell for sure, not being a paythrough of mine. The player never recruited any NPC as far as I know. Hopefully is an isolated case.

So, I got back to the game again and here are some of the issues I managed to verify.

- monks, paladins and rogues at creation gain bonus feats and class features as if they already reached 2nd level - Fixed 1.0.85
- fight defensively, combat expertise and reckless offense can be switched on and off even after attacking - Fixed 1.0.85
- spending a standard action to use a magic item doesn't break concentration (any standard action should)
- opening the inventory sometimes breaks concentration
- Lareth is immune to hold person during the moathouse encounter - NAB
- brigand leader barbarian rage breaks fascinate (moathouse encounter at the back of the hall)
- bard's fascinate and suggestion work on undeads
- bard can't perform a suggestion if her daily uses of bardic performance reaches zero - Fixed 1.0.85
- calm emotions doesn't remove the confused condition from the targets
- creatures with blinded, panicked, calmed, flatfooted condition or in total defense still threaten the area around them
- characters that "hold the charge" don't threaten the area around them (Ref.)
- the extra attack from improved trip doesn't trigger while prone
- CTD if you choose to temporarily leave all your party at the inn (yeah I know :D)
- here's a savegame where the giant crayfish encounter got stuck - Fixed 1.0.85
- here's a savegame where the moathouse bandit encounter got stuck - Fixed 1.0.85 (added failsafe, also Lareth script issue that might have caused it)

EDIT: added blinded
Last edited: Aug 21, 2021
You must log in or register to reply here.