I got mixed up in the names (it's been a long time since I've played it). Reaper's Coast is the second island, the third one being the Nameless Isle; so yes, you only missed the last island, Arx, which offers a little more content than the third island.
Make a hole! Oh yeah.

Crispy said:
I'd say that you, as a "developer" are being an asshole by saying that, even if it's to/about another developer whom you can't stand, whether they themselves or their products.


As an official RPG Codex recognised Developer, I have a superior understanding of inter-developer dialogue. You wouldn't get it, much like Larian doesn't get how to make a good RPG.

To be fair, the need to use a non-ruleset mechanic like reloading to get out of a fight you can't win because the game doesn't support ruleset mechanics that would let you escape and account for that possibility is a good criticism. The DOS2 kinda has that problem too. Can my level 3 characters handle this area with level 5 enemies? I don't know. Don't see anything else to fight. Then you try the fight and either have to reload to practice barrelmancy or look for other fights to level up or figure out how to exploit the mmo cooldown simulator abilities in the right order to stunlock enemies with because barrelmancy is a retarded thing to put into a game.

Though it's kinda out how they talk about all that other stuff is just due to their lack of knowledge of the ruleset or the ability to understand ability restrictions. I mean, exhausted? I think there's a tutorial that tells you to rest. Spider swarms? A review november 2021? They already patched in the tutorials for it. Referring to pathfinder 1e and the minmaxing as one of the reviewers does yet ignoring the fact that the system is built around prebuffing before combat to ensure character like minmaxed tank/melees actually function in their roles or to avoid something like fear effects. A fully buffed party trivializes the stag king on difficulties up to Hard, especially if you did the scavenger hunt around his base before fighting him and got away with it.

As the great Pierre once said in a review of IWD2:

Because no buffs/protection spells means the enemies murder you where they would be trivial if you did buff and assign protections.

They don't even get into the real criticisms of the game like the HP/stat bloat everywhere partly due to developers and partly due to the ruleset (DOS2 for comparison wouldn't have any difficulty if it's enemies weren't designed around making bigger level number equate to bigger hp and damage), or the fact that the game has a shitty subsystem that takes a huge amount of the gameplay and the quests designed around it like the artisan quests are absolute shit (too bad they doubled down on this in wrath and added a different shitty subsystem), or how the House at the End is garbage (and they followed the design philosophy behind it for the entire next game).

Not a coincidence that most of these reviews also mention Pillars as an example of a good RPG.

FriendlyMerchant said:
Because no buffs/protection spells means the enemies murder you where they would be trivial if you did buff and assign protections.
Click to expand...

cyoa > rpg
you come upon enemy, due to various circumstances you recognise before hand what you will be facing, you protect yourself.

Prebuffing is only fine in games with finite resources and ironman mode that also somehow telegraph danger ahead, as opposed to metagaming

How do you know these are Larian cultists dawg?

Agesilaus said:
As an official RPG Codex recognised Developer, I have a superior understanding of inter-developer dialogue. You wouldn't get it, much like Larian doesn't get how to make a good RPG.


Crispy is a Raiders fan. I know he's already shameful enough but it's still worth bringing up. He roots for Derek Carr.

Shaki said:
Not a coincidence that most of these reviews also mention Pillars as an example of a good RPG.
Click to expand...


But for the most part only the second one, which was more akin DOS than the first.
He raised his wand. "Giń, kurwa!"

"Giń is a death spell," he explained. "And kurwa makes every spell 1000 times stronger".

FriendlyMerchant said:
Because no buffs/protection spells means the enemies murder you where they would be trivial if you did buff and assign protections.
Click to expand...

I've said it time and time again, Swen Vincke is the greatest Belgian that ever lived.

People can shit on Larian all they want, but there is no denying this fact.
i'm a donkey on the edge

samuraigaiden said:
I've said it time and time again, Swen Vincke is the greatest Belgian that ever lived.
Click to expand...

And chickenpox is the greatest disease that ever existed, what's your point?
Elden Ring SL1 playthrough - no summons, change weapon after every boss (completed) 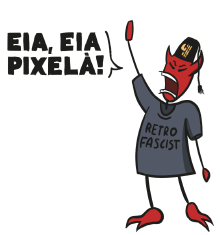 
About having to find the scrolls, this is not a problem IMO. Unless the magic user has a patron teaching spells to him, being able to learn spells from tin air is kinda silly. And allows DMs to avoid giving scrolls which makes no sense for the campaign to the party. If the DM don't wanna the magic user casting fireball, knock and stoneskin, he can just not put scrolls of this spells.

About pre buffing, sadly enemies are retarded and don't cast dispel magic. Even a freaking ancient cyclops lich is not smart enough to figure out that if the party has 666 spell effects, maybe is best to dispel it before engaging in a fight.


FriendlyMerchant said:
how the House at the End is garbage (and they followed the design philosophy behind it for the entire next game).
Click to expand...


Agreed. WoTR in ch 4+ is just "demoniac" house at edge of time.

Sadly high level in owlcat games is just "bloat". I wish for rise of the runelords next, so we will end up around lv 14 hence there will be no bloat. And is not as if lv 14 is low level. You can create upper mid tier undead like phantom armor, fight adult dragons, throw hellfire into the enemy(...)
All dwarves and halflings must hang and all half orcs must be enslaved.
Gothic 2 - RETURNING lets play as an WATER magician
BG2:EE solo run on Legacy of Bhaal difficulty
PFKM run on Unfair difficulty as a Thassilonian necromancer
Larian cultists reviewing BG1/2 and Larian cultists reviewing PFKM

Agesilaus said:
What if I told you that pathfinder sucks AND Larian should never have been allowed to make games?
Click to expand...


I would agree with you, except for the fact that Divine Divinity is kino.
https://tinyurl.com/44zpc3ry <- Damning Proof of the 2020 Electoral Fraud -> https://hereistheevidence.com/


Cleveland Mark Blakemore said:
I thank god every day I drank that sodium lye at 18 months old. What a blessing. Like the radioactive spider that bit Peter Parker, it was the most incredible thing that could ever happen to a human being.
Click to expand...