Correct_Carlo said:
It's also a fairly depressing reminder that we will all die before we get through even 1/8th of our Steam backlogs.
Click to expand... 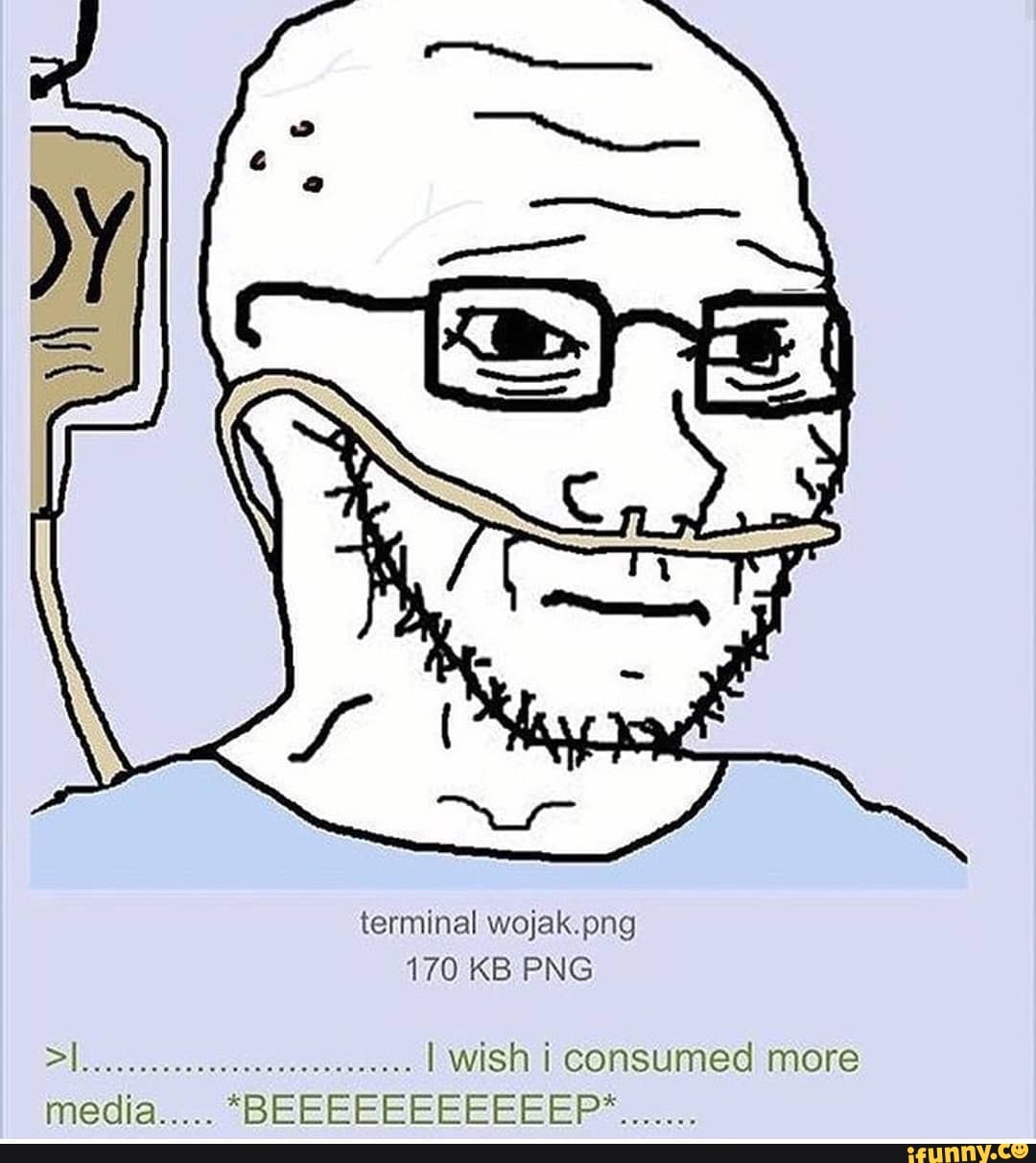 This is funny and also very likely what I'll be thinking on my death bed.
Swen Vincke's words of wisdom: "I like Roguey's posts. I don't always agree with him, but I respect him."
A list of my favorite movies/shows for those who want to know but lack Library access; 25-33 minute JRPGs

MadMaxHellfire said:
why fewer people than those who would attend *my* funeral?
Click to expand...

I don't even know enough people to qualify for a funeral.

is it only us or is this the saddest generation ever?

anything you want to

Damn any more not completely gone commentators like him?

I looked up the old Spoiler Warning crew and it looks like not one mention of Shamus from them. What colossal shitbags.


How dare you shift the focus to Covid when a man is dead!!1 Literally shaking here

That's very unfortunate and sad to hear, he's one of the people who I really enjoy seeing their content. I got hooked up on Cities: Skylines because of him and enjoyed it quite a lot. I hope his family overcome this.

What was their problem with him?
Let's Play Ultima: From Akalabeth to Ascension (currently on the Black Gate)

What was their problem with him?
Click to expand...

He refused to adopt a 'code of conduct' or ban commenters they didn't like.

While playing Life is Strange, a discussion took off over the morality of depicting a parent striking a teenage girl. One commenter specifically called the act 'justified' in the context of the game, which triggered the hell out of Mumbles. Mumbles also made overtly lewd comments about men (the men on the show never did such things), and frequently showed an enthusiasm for cannibalism, but hitting a girl is Not Okay you guys. (It also came out that the commenter was not a native english speaker, and probably should have used the word 'understandable' instead of justified, he just didn't have the best vocabulary. But none of that mattered.)

Mumbles had a freakout and pushed for nuking the comments, while the other losers on the show lined up behind her as white knights. Shamus agreed the commenter's opinion was wrong but refused to ban him, perhaps in an impressive display of loyalty or maybe stubborn conviction of his principles. In any case he didn't stream again for a long time and I think it took a toll on the blog. The other faggots didn't have their own following except for Chris, and proceeded to bash the hell out of Shamus and the fanbase off-site.

*edit* (Lol nope, my memory sucks, Mumbles actually left before this whole stupidity. It still feels like she had a hand in it somehow as the white knighting was always strong with the cucks.)
Last edited: Jul 2, 2022

What a Shamus to die so Young.
Bye.

Did they really? I thought they just avoided ever mentioning that Spoiler Warning had a "golden age" on another platform.

anything you want to

"Just lift, bro" really isn't good advice for people who die young. If you are dying young, there almost certainly was something wrong with you that you aren't at fault for. Even living a horrible live, it takes decades to bring a healthy body to ruin.

Did they really? I thought they just avoided ever mentioning that Spoiler Warning had a "golden age" on another platform.
Click to expand...


Huh, after reading that drama thread I realized my memory compressed several different events into one narrative. Mumbles left before the Life is Strange meltdown. She was the one most aggressively attacking the site and commenters.
Last edited: Jul 2, 2022

Reading this again its interesting to see the microcosm of internet 2.0: Codes of Conduct, "Safety and inclusion," and all the elements of the socjus/anti-racism zeitgeist coalescing in one place.

Every stupid cliche of millennial/zoomer wokesters is there:

-Rank authoritarianism coupled with gutless cowardice; they want to control the discussion but not take responsibility for it. It's always for the sake of unnamed "others" who must be included and made to feel "welcome" (by banning everything the speaker personally dislikes).

-Women as unilateral moral arbiters and sacred cows; beneath agency but above reproach. Note that this has shifted to blacks and trannies now, with women starting to rankle at the demotion in the hierarchy.

-Blame shifting, DARVO, etc. The discussion 'got heated' but Josh and Chris were the ones throwing the heat while their target calmly and reasonably made his point. At no point did they attempt to discuss or debate, rather they insisted that the act of disagreement itself was immoral and a must not be allowed. You see this EVERYWHERE now, it has completely displaced law, reason, logic, facts, evidence, or science.

Twenty Sided was just a stupid blog but this crap is everywhere, in your school, your work, every major game publisher.

Man, people these days just fall over dead left and right, it seems. Meanwhile during a period of relative quiet, I went and made sure I wouldn't be falling over dead like that by getting two redundant robot hearts installed. You people ought to get at least one, it's not healthy having only one of something you actually need.

Damn shame. I loved the DM of the Rings.

I happened to check out his blog and one of his children took over the website, and she's some kind of they/them freak with coloured hair and posting about oppression of videogames and shit.
Even the site looks gayer. Poor guy, that's his legacy now.
What makes a good man turn neutral? Lust for gold? Power?
Or were you just born with a heart full of neutrality?


It is his oldest kid, hence not undeserved.

Is it the time to mention I’m very gay? He never mentioned me much, mostly to protect me from the horrors of the internet. But, uh, I feel like if I’m going to be trying to be making content over here we should probably get that out of the way. So, hi Internet, I’m Shamus Young’s oldest child, Bay, a currently 24-year-old they/them bisexual with two happy life partners[6] .
Click to expand...

That bit of info was interesting, though.

So… I’m kind of morbidly curious now. Does anything special happen at all, or does Steam just assume you stopped logging in and blissfully keep your data untouched?
Click to expand...

Pretty much nothing happens. Steam just lets the account sit there, it’s pretty much up to the family who gets it. You can pass it on to someone as an inheritance, or just let it collect dust. I suppose you could also delete it, but that seems like burning money. We’ve turned it into a ‘family account’ since he owned nearly a thousand games. I do kind of wonder what would happen if it got listed in someone’s official will? But, likely it would just be the giving of passwords just like the unofficial version.

The internet has made death very strange since much of the things someone ‘had’ can be in a digital space. This site itself is pretty good evidence of that.
Click to expand...

Perhaps someone should backup the contents while we still can.
Non-post apocalyptic Sci-Fi RPG thread
List of RPGs with base management mechanics
The definitive, authoritative, and probably non-exhaustive list of non-(IBM) PC cRPGs

His Thief series articles are great.
Here he talks about "The Cradle" from Thief: Deadly Shadows.
https://www.shamusyoung.com/twentysidedtale/?p=309

May he rest in peace.

That's terrifying. He was religious and his kids were homeschooled. This shit is everywhere.
You must log in or register to reply here.